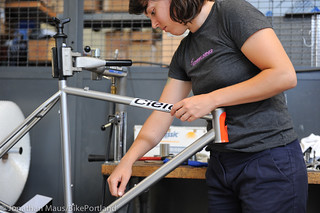 An employee puts finishing touches on a Cielo frame at the factory in 2013.
(Photos: J. Maus/BikePortland)

If you were waiting to order a Cielo, it’s too late.

In a statement, the company said, “After reevaluating marketing and sales goals for the coming years, Cielo unfortunately did not fit into our plans. We are quite proud of the product that the brand has produced over the years, but will be focusing our attention and resources on our core product families (headsets, bottom brackets, and hubs).”

Cielo was started by Chris King in Santa Barbara California 1978. By the mid 1980s King’s headsets had become so popular that he stopped making bikes to keep up with the demands of his fast-growing company. As his headset (and later hubset and bottom bracket) business grew he added staff and moved his business from Santa Barbara to Redding (CA) and then ultimately to Portland in 2003. Once settled into a large manufacturing facility in the northwest industrial district and with a healthy business (the company now employs over 130 people), King rekindled the Cielo brand in 2008.

In the years since, Cielo established itself with with a well-regarded line of road, mountain and cyclocross bikes. Similar to their approach to components, the bikes were known for a meticulous aesthetic and hand-made feel that appealed to discerning customers. The bikes were made in small batches and offered the quality of a one-off custom bike with the benefit of a 60-day delivery window. In 2013 we reported during a visit to the factory that CKPC was making about 300 Cielos a year. In 2015 Cielo faced, “an explosion of demand” from around the globe and the company hired veteran framebuilders Curtis Inglis (Retrotec) and Jeremy Sycip (Sycip Designs) to help meet production deadlines. 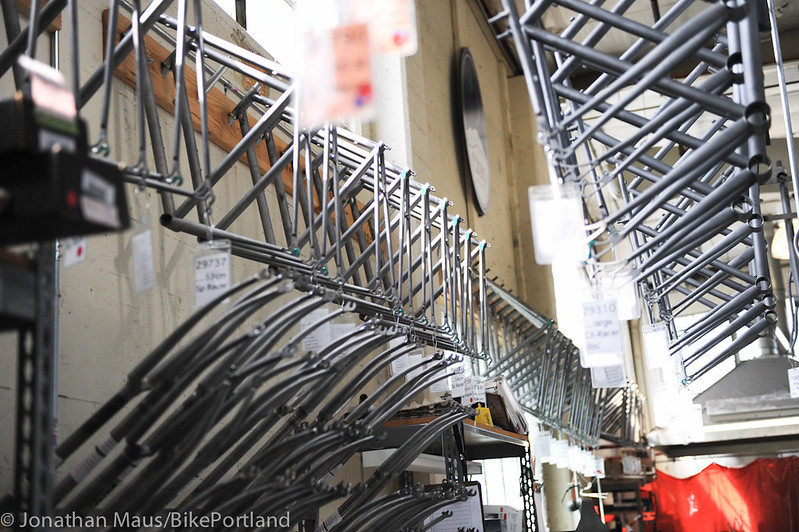 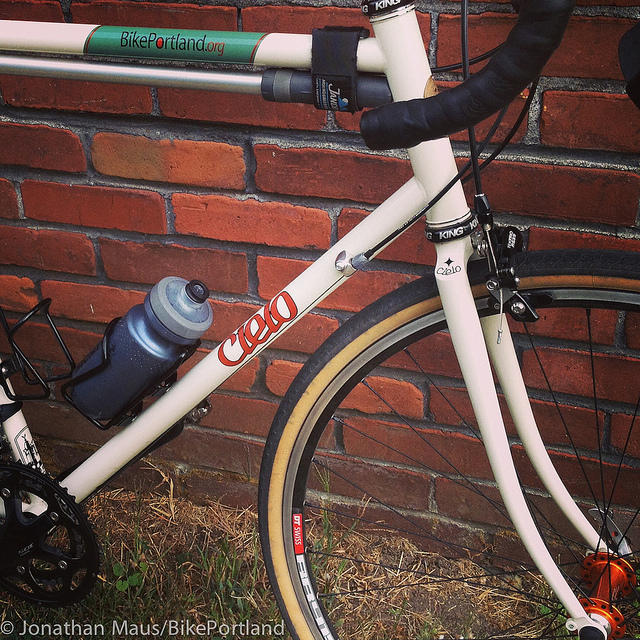 I count myself as a proud owner. 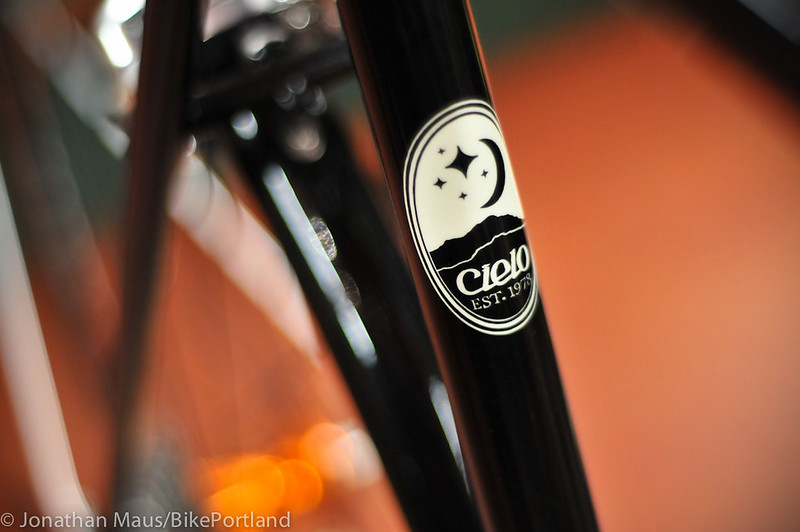 Cielo is named after a mountain road (Camino Cielo) in Santa Barbara, California. 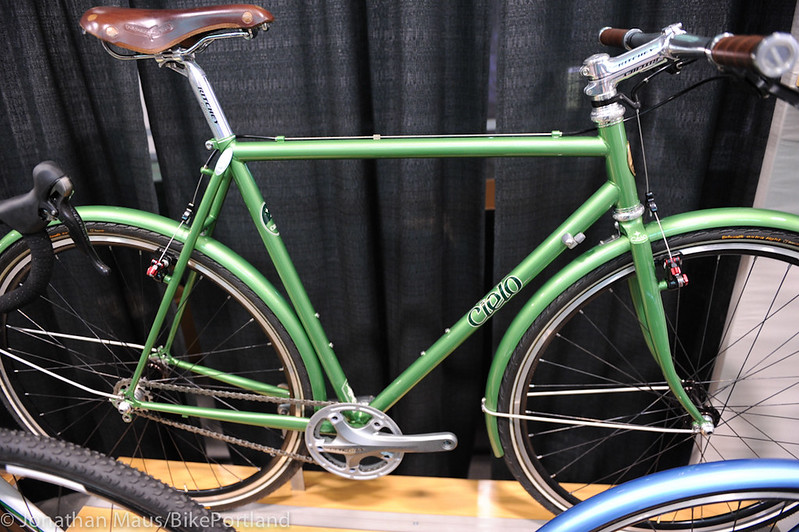 A Cielo on display at the 2011 Oregon Handmade Bike Show. 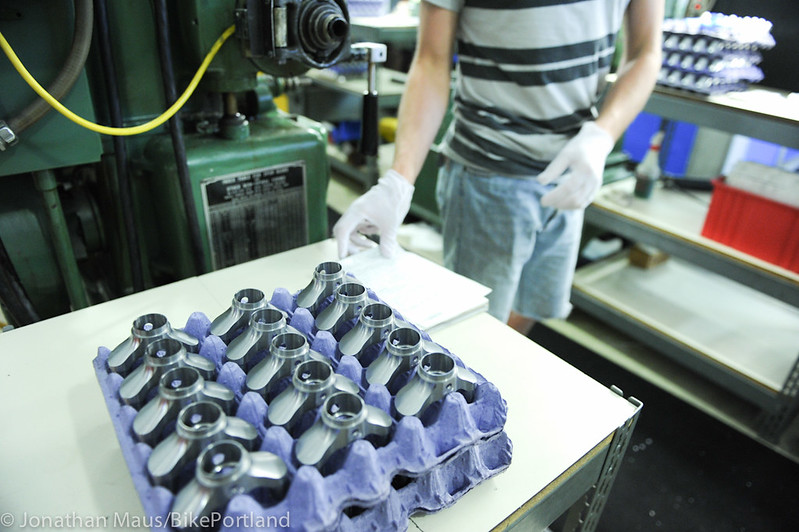 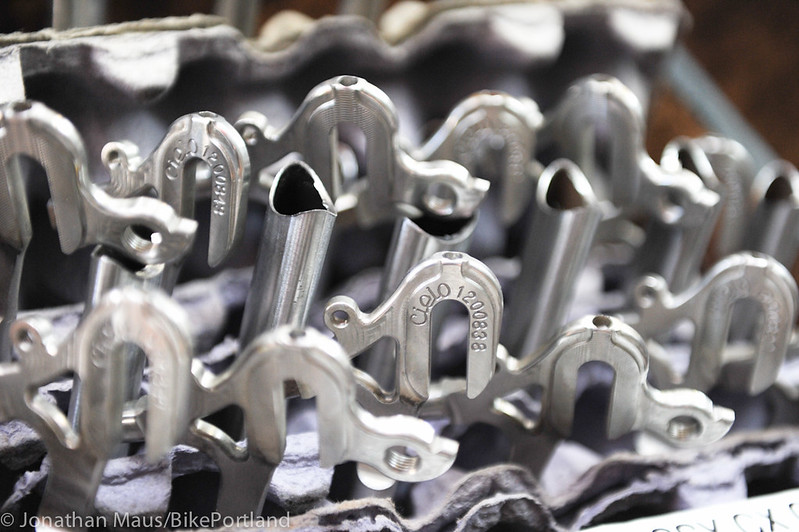 The company also made its own dropouts and forks. 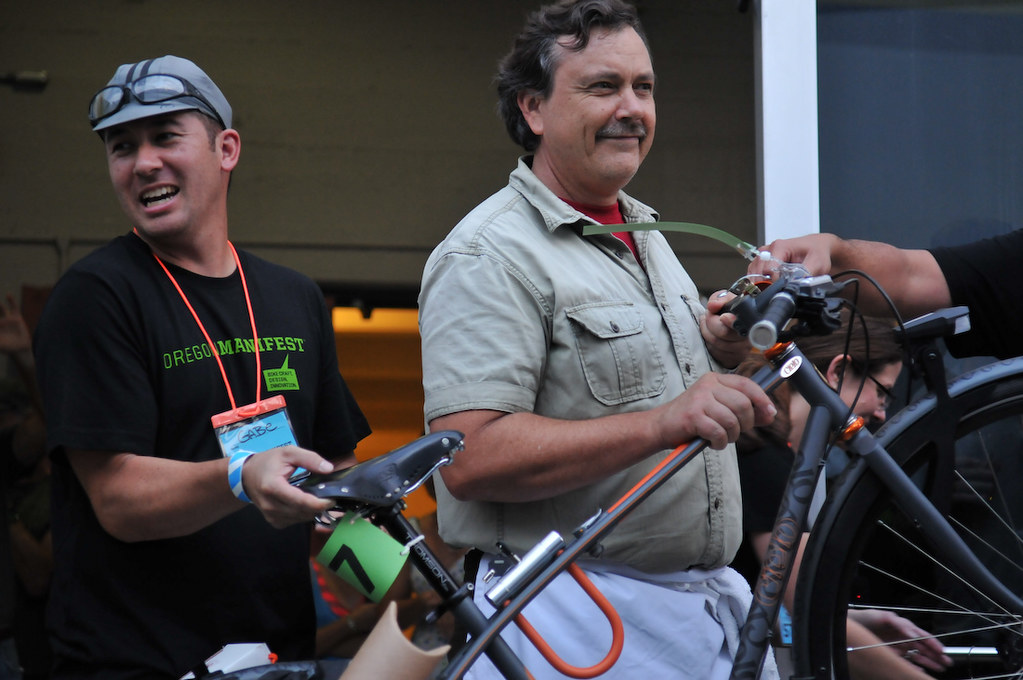 “It was a tough decision that was not taken lightly. Cielo is an important piece of the history and legacy of CKPC.”
— Bob Scales, sales and marketing manager

Reached for comment today, Chris King Precision Components Marketing and Sales Manager Bob Scales said, “It was a tough decision that was not taken lightly. Cielo is an important piece of the history and legacy of CKPC, but at this time we feel the need to focus on our core business of making the best components and bearings possible.”

The company’s Design Manager Jay Sycip, who was hired in September 2008 to manage the Cielo brand, offered a similar sentiment. “It was a very hard and emotional decision as a ton or work and money went into getting the brand back off the ground and moving. We also have a lot of work ahead of us here just in the CKPC component side of things.”

Scales added that the three full-time Cielo employees were let go a few months ago. One of them, Josh Kelley, dominated the local mountain bike and cyclocross racing scene for years astride his Cielos. This season Kelley will race for the Breadwinner Cycling Team.

In addition to focusing on their component business, the end of Cielo means CKPC can become a stronger partner — instead of a competitor — for the many bike builders that spec their parts. Sycip said the company wants to, “Support all the frame builders that support us in our component business,” and Scales added the move will lead to, “Expanding on existing relationships by providing a platform and voice for brands that choose to spec Chris King and our made-in-house bearings on their builds.”

If you own a Cielo, the company will continue to honor existing warranties.

Done in by those darn plastic bikes

I doubt it. Either the economics were not there for small scale production or the demand was such that ramping up would mean large expansion/investment that would not pay off long term.

Guessing they made money selling off the brand.

Knowing Chris, I seriously doubt the brand was sold (although I haven’t confirmed either way). He’ll just put it back on the shelf where it sat for 20 years before he dusted it off the last time.

“Once settled into a large manufacturing facility in the northwest industrial district and with a healthy business (the company now employs over 130 people), King rekindled the Cielo brand in 2008.”

This company does not have nearly 130 people anymore.

Layoffs sound like they happen quarterly now (which never gets reported in the ra-ra yay Chris King lazy rehash of their press releases). The company is clearly in some dark times and it’s not just Cielo.

“In addition to focusing on their component business, the end of Cielo means CKPC can become a stronger partner — instead of a competitor — for the many bike builders that spec their parts.”

Another funny way to spin things in a press release. The story that their biggest demographic has been Japanese steel frame fanatics and bike mechanics after a bro deal, and that the brand has otherwise never taken off and hemorrhaged money right from the get go for almost ten years, isn’t all that glorious. I think few framebuilders ever saw them as any formidable competition. This is about trimming the fat to keep their heads above water and avoid bankruptcy.

Neil, those are some strong statements, that have the “ring” of truth to them. Do you have any evidence to back up claims that CKPC is in overall financial trouble? Just curious.

Neil must be familiar with the bike industry in general, once you leave the fanboy instagram pages, all bike sales are slow, so for that to be reflected in a niche high end product manufacturer sounds like business being business and for CK to right size their business based on demand is what companies do that have lasted 40 years.

The hilarious part is that they make a product that everyone likes to love but no one likes to buy. They make their product within 20 miles from almost everyone on this blog, they use all american aluminum bar stock for the shells, and steel for their steel bearings (japanese ceramic bearings). They make products that are not subject to obsolescence and will last many many thousands of miles on your bike. Does all of this get reflected in the price, yes it does, but when you amortize the cost into the miles and years of ownership, they are some of the most affordable cycling products available.

FYI, no affiliation whatsoever with CK, just a huge fan of local made quality products.

Thanks for the comment Neil. I do have a soft-spot for this company since I’ve known Chris for a long time, it was my first job out of college back in the day, and I’m a booster of all things local. Guilty as charged for not taking a more skeptical tone to their news.

I’ll need to look into this and confirm it to consider a story. Even then, I’m not sure delving into the troubles you claim they have would be a story that would be at the top of my list.

It would be nice to think that jettisoning the albatross that was the whole Cielo operation would mean the company would use the savings to offer their employees something that remotely resembles a living wage, but I’m doubtful that will be the case.

Cielo owners are now in possession of instant collector bicycles.

CKPC squandered a perfect opportunity to blame this on the bike tax.

I hope for the best and resurrection…I will miss them at the shows and showroom floor…and enjoy the Cielo I have (like my Lemond after Trek closed it out too). Too bad they did not make this public before the Handmade Bike Show last weekend. I look forward to an update on this and the industry trends (market saturation or price point fatigue etc.).

Pretty sure the serial number on my Sportif is below 20, maybe 10. Was blue, is now orange… plastic-smastic! Am so proud that my bike was made about 1 mile from my home!
Hmm, Mr. King, Mr. Sycip, what next? Oh, I need some touch up paint 🙂 Best of luck on future efforts and thanks.

where can you find the serial number? looking for it on my Sportif Racer and can’t find it…thanks Jim

The cost of living is too high in Portland. I imagine CKPC may suffer the same fate if they can’t keep their labor costs down. Eventually they’ll only be able to afford high school labor living rent fee with their parents. I hope not, I value the components they manufacture.

My understanding is that this (not paying their workers enough to be able to afford the cost of high rents) is why they left Santa Barbara.

It’s interesting, though, because for example, Phil Wood is still in San Jose and never had to move.

What is Phil Wood doing differently?

Although obviously I don’t really know for sure, I worked as a grunt/machinist for CKPC in 2007,08,09, and my sense is that they have a substantial amount of inefficiencies in their manufacturing process, and they don’t seem to know or care.