The combination of cabin fever, need to exercise (gyms are closed), nice spring weather and eagerness to enjoy streets with much less traffic than usual has led to a strange scenario in Portland: Even during a public health quarantine, many bike lanes and sidewalks are jam-packed during peak hours.

This past weekend, streets and bike paths across the city were full of people not driving cars. During my time observing streets in north Portland, the vibe was almost Sunday Parkways-like.

But here’s the rub: The vast majority of our street space is allocated to drivers, leaving just a sliver of space for everyone else. It’s always been like that. These days however it’s even more unfair, dangerous and unhealthy. Public health officials — and even Oregon’s Governor — strongly advise a six-foot distance from one another while out and about.

That’s not easy to do when you’ve only got a few feet of space to safely move around in.

One week ago we shared the idea of north Portlander Sam Balto. He thinks some streets should have limited access for drivers so that more people can enjoy the outdoors and still practice safe social distancing.

In the past seven days that idea has caught fire. Balto’s idea spread nationally in part thanks to the article being picked up by Streetsblog USA. By Friday, the City of Philadelphia had actually implemented a temporary carfree street to make more room for walkers and rollers. By Sunday the idea was hailed by none other than legendary TV journalist Dan Rather as, “A good way to let people outside, while keeping social distancing.”

Then the dam broke further when New York’s governor and New York City’s mayor both said they planned to not only limit car use on certain streets, but to create temporary bike lanes as well. 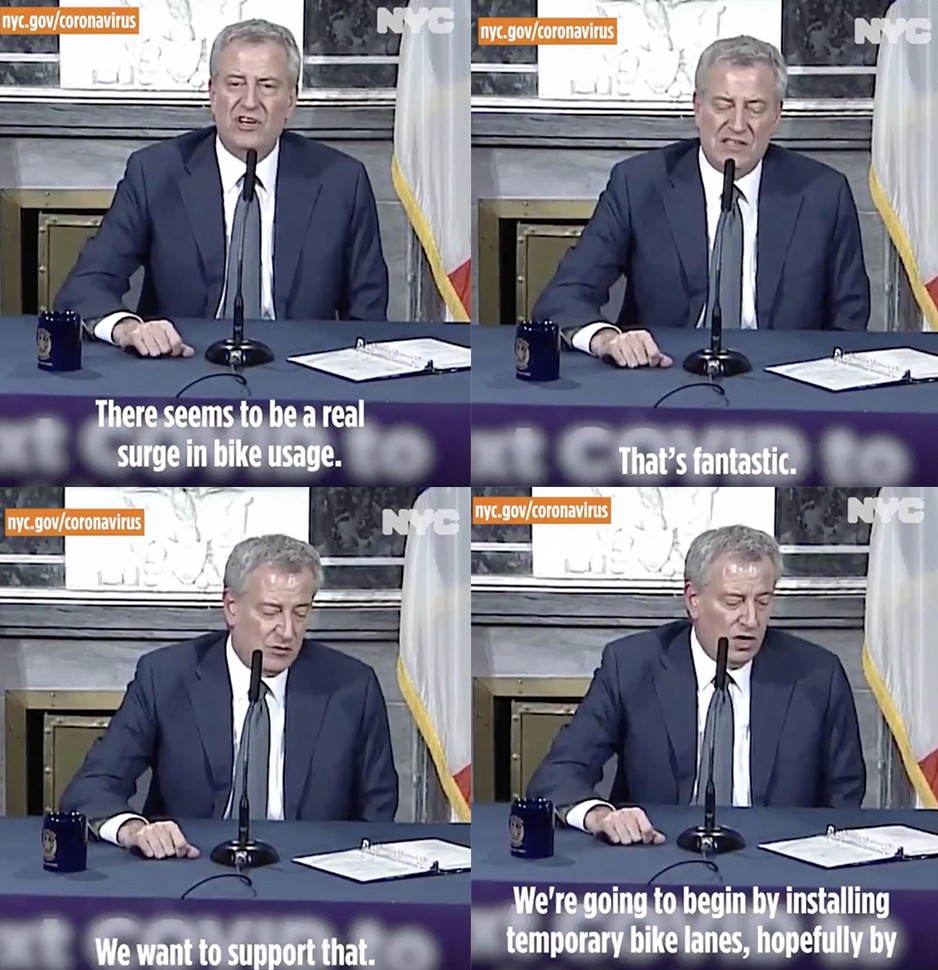 Portland is a far cry from New York City or even Philadelphia for that matter, but given our legacy of bike-friendliness, and deeply rooted love of walking, jogging, and cycling among our population, this might be something worth considering here.

Take a closer look at those images of North Willamette Blvd or the image of the Esplanade from reader Armando Zelada. Note how people are scrunched into the narrow spaces, forced to pass at unhealthy distances. Meanwhile there’s an expanse of road space that — even without drivers present — people are afraid to use. On Willamette, this led to people jogging against traffic in bike lanes, walkers using the median, and people passing each other too closely. What would someone using a mobility device do? They would have a very hard time moving over for others. How many people using the Esplanade would use SE Martin Luther King Jr Blvd instead of they could do it safely?

There’s also the fact that when given more space, drivers tend to go faster and drive even more dangerously. If we can limit driving space, we’ll also prevent crashes that will put even more strain on hospital resources.

I’ve asked the Portland Bureau of Transportation what they think about this and I’m still waiting to hear back.

My hunch is they’re not exactly looking for more work to do. The agency is in crisis mode and I’ve heard that maintenance crews are only at half-staff in order to maintain social distancing in vehicles and offices. That means they’re only able to respond to emergencies and basic safety requests. I’ve also heard that the virus outbreak has put an indefinite pause on all capital projects, possibly pushing out all timelines by a year as the construction season gets constrained further with each passing week.

PBOT has partnered closely with the community in the past. If they want to create streets that serve us well during the pandemic, it might be time to do it again.

Further reading from The Verge: There’s no better time for cities to take space away from cars.

I love the 70’s dude in the first picture on North Willamette. I figured that Covid-19 would take us back to the traffic levels of the gas crisis, but I didn’t figure people would return to the styles of the 70’s so quickly.

I did this 21-mile loop over the weekend using the relatively new bike facilities of Foster Road, 102nd Avenue, and the 130s Bikeway. This deliberately avoided the Springwater Corridor and the I-205 Path.:

Saw few cyclists along the route, and never got close to any riders or pedestrians. Jonathan did a write-up on 102nd Ave here:

Here’s another loop of the 50s and 80s Bikeways that was a Pedalpalooza ride a few years ago:

Does anybody have some other bike-friendly loops that avoid pedestrian facilities?

On Sunday I saw that neighbors had blocked one end of a street to cars using those large recycle bins. Some were sitting in chairs in the street, widely spaced, and others in their yards. They were having a nice chat. I hope this becomes a wider movement to offset the negative impacts of social isolation such as depression, and worse. Humans do not response well mentally to extended solitary confinement. There is no time or resources at this point for a complex permitting process. The recycle bins or equivalent should be used as needed. PBOT should consider the dire mental health consequences of not allowing neighbors to safety socialize at a distance.

My front door opens to the sidewalk. For people to maintain a social distance from my door, they would have to divert to the street, which is not something that people would think to do. People walking and run by my door with their dogs and their kids all day long. Given the amount of traffic, I am concerned that I am at risk of contracting the virus since someone could sneeze near my front door.

Summer is right around the corner. Would folks rather stay inside now or drag this out and potentially have to stay indoors during our beautiful Oregon summers?

You could use duct tape to make a path routing a few feet away from your door. Make a sign to explain. Cut into the parking space if you need to; people will understand.

I gues it depends on your expectations… the pictures above are along a busy street in North Portland. I went out Sunday and didn’t see too many folks on the spring water East of Sellwood. At least in the photos you provided there is a decent road and at least a sidewalk. My neighborhood offers potholes, gravel, and street walking. I do giggle when the walking coordinators show up to my NA and try to tell us about alternative walkways as if that will make me feel more confident doing what I already do but adding some easily ran over plastic wands. So yeah, it depends.

Over here in Bend, the most popular hiking/walking place is Pilot Butte. You can create a 2 to 3 mile loop, with a healthy climb to the top. At this time of year, with the weather we have been having, well over 1000 people a day are on the Butte. As of today, it is closed, whatever that means. The State closed the one large parking lot, and is saying to stay away. Makes no sense to me. I can see closing the parking lot, but a large proportion of the hikers walk to the Butte. Now, what will happen, is that people will still hike, but will head to the Riverfront Trail system, increasing density, and raising health risks. Makes no sense at all. There are over a dozen ways to access the Butte, so there is no way they can enforce a No Hiking ordinance, and they will not even try. But, I’m guessing a large number of law-abiding folks will hike elsewhere. I plan on challenging the ordinance.

The idea is to reduce crowds. If the policy deters some people from showing up at places like Pilot Butte (which I can only imagine would be incredibly overrun otherwise) then it’s working. Sure, some will move down to Drake Park or the River Trail, and then city officials have to think about acting, then they do that. But not everyone is going to move to the riverfront. Many will spread out to less-popular but nice areas like Horse Butte, and that’s what we need.

http://72km.org/virus/ Here are a bunch of snaps I made on Sunday along the Esplanade and Springwater in follow up to the above riverfront picture. I have never seen so many families cycling…we need these people on the streets all the time. Was it cabin fever or a combination of fewer cars on the roads & oppositional behavior (my own probably)? I go to Oaks Bottom almost several times a week and it is normally not this crowded on Sundays except after a sunny day following a week of rain…what mixed set of feelings: great activity in the times of virus. How conflicting?!?

This is why I like the City Of Vsncouver, BC’s bikepath designs so much. They have separation for cyclists and pedestrians on TWO wide separate paths with a strip of planting inbetween. For example at Stanley Park.

The only thing similar here is a teeny teeny strip of newly built path on the SW Waterfront Greenway for a few blocks between SW Whitaker and SW Lane. It’s a great example of how to provide space for different modes.

Infortunately, being the City of Portland that built it, the signage for it is predictably appalling and confusing, so everyone just bikes and walks everywhere on it * eyeroll*.

The whole “social distancing outdoors” situation seems kinda silly to me. Yes, you could be infected if someone sneezes or coughs on you, but is there any clinical evidence of transmission in this way? You are far, far more at risk indoors, in confined spaces where microbes are trapped in the air or lie on surfaces.

I say let people be outdoors as long as they are not coughing or sneezing on each other, and refrain from touching surfaces.

I wonder about this too. If anyone has info to share that would rule. I want to go run, but I don’t run on streets, just trails. It seems so amazingly unlikely I’m at risk of anything happening, unless like Fred said, someone sneezed, somehow, like right in my face. If I’m wrong I’d like to know! I want to go run!

This is the best article I saw so far.
https://www.cyclingnews.com/features/commentary-why-its-better-not-to-ride-together-in-the-time-of-coronavirus/
And you can see some of the comments too…

Everything is a risk at this point, also if you hurt yourself and need to go to the hospital…
Stay safe!

Like A J Zelada said, it’s wonderful to see so many families (not to mention dog-walkers!) out out walking and riding. With school out, kids are out with their families everywhere, and lots of family recreation is going on. A lot of these kids are going to remember that one dimension of this awful time fondly. I won’t be surprised if a new generation of kids will be inspired to ride as adults based on this experience.