PBOT adds to bikeway markings along Orange Line in southeast 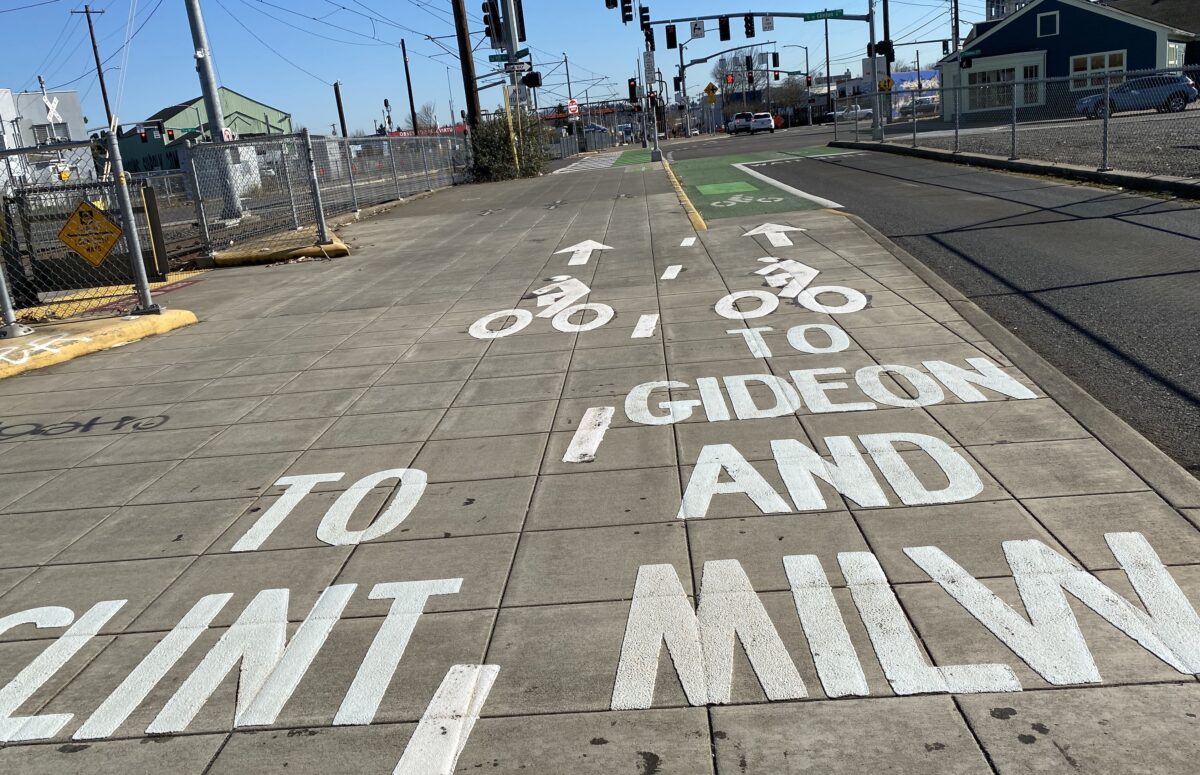 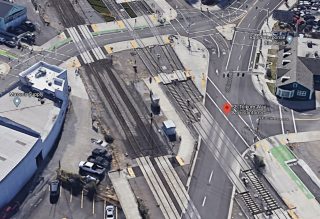 It’s been well over five years since TriMet and the City of Portland opened the bikeways along the Orange Line MAX in inner southeast. Despite spending an unprecedented $40 million (not counting the Tilikum Crossing Bridge) to make biking and walking on nearby streets better, there was confusion and grumbling from bicycle users from Day One.

“I got turned around twice trying to navigate the maze of crossings between SE 8th and SE 12th to get to Clinton,” wrote one reader in a comment when the facilities opened in October 2014. “I still haven’t figured out how to get to Clinton,” said another.

That confusion led to a serious injury collision between a bicycle rider and bus operator in 2015. In 2019 PBOT settled a lawsuit based on that collision for $145,000. PBOT Commissioner Chloe Eudaly said at the time that the intersection where the collision occurred — SE Milwaukie Ave and Tilikum Way — was “complicated”.

Late last month PBOT added new markings to the intersection to make it less so. 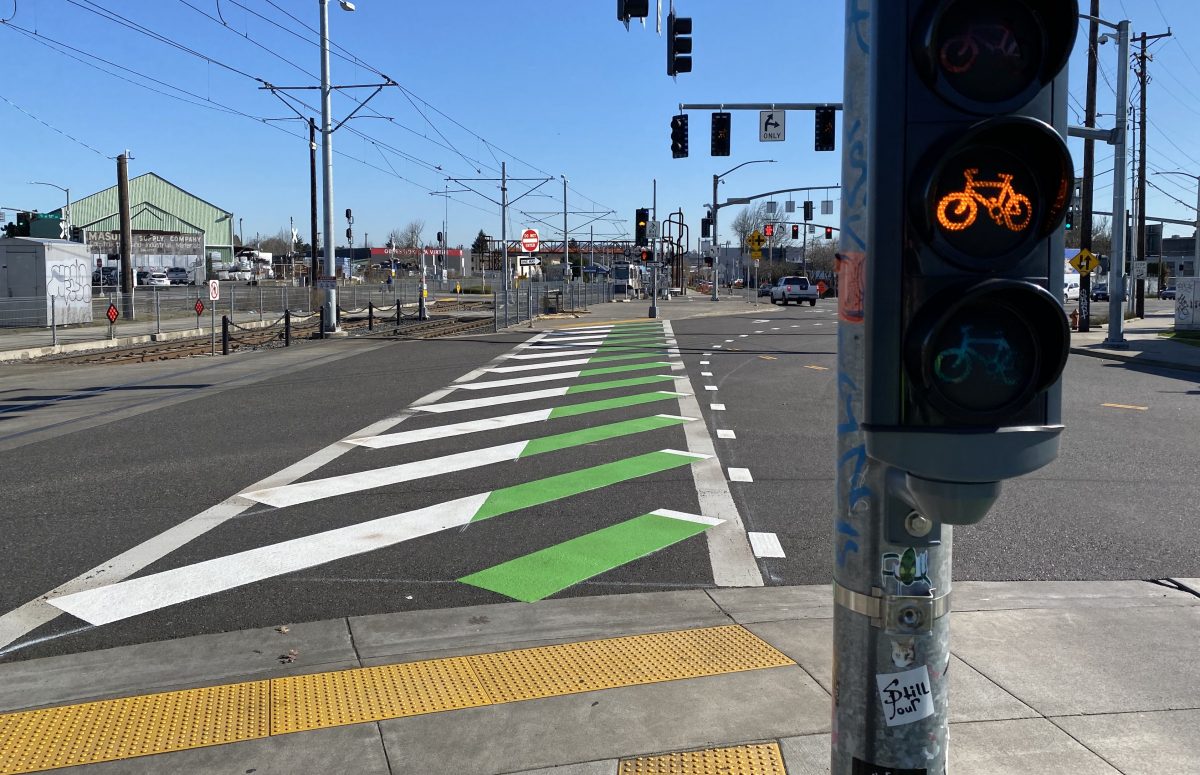 
As I rolled up to the intersection recently I thought someone had tagged the sidewalk. “TO CLINT” and “TO GIDEON AND MILW” read giant while letters on the sidewalk adjacent to Tilikum Way as I headed eastbound toward Milwaukie. With two separate bicycle symbols and arrows, PBOT hopes the new markings will do a better job directing traffic at this very non-standard junction of streets, sidewalks, and rail tracks.

PBOT has also added new markings in the crosswalk of SE Milwaukie. One side is white and the other is green. Usually green and white are used to separate bicycling (green) and walking (white) routes. But since this is such a high volume bikeway, perhaps in this context they’re also meant to separate bike users riding different directions.

I’ve asked PBOT to explain what spurred these changes. I’m curious if they were done in response to general complaints and concerns or if they’re a direct result of the recent legal settlement. I’ll update this post when I hear back. UPDATE: PBOT Public Information Officer Dylan Rivera says, “Yes, these new markings are some of the adjustments we have made as a result of the suit.”

Do you use this route? Do the new markings help clarify where you should go?

I have known two guys named “Clint,” one salt-of the-earth, one utter toad.

I still haven’t figured out the way PBOT wants me to get to Clinton. I don’t think these markings help clarify that.

My strategy at this intersection involves a complicated formula of other riders, signal timing, train rumbles, moon phase, and the whim of my fancy that particular evening.

My way, look around to see what everyone else is doing, then do something that doesn’t get me mangled.

Roger Geller of PBOT told a BikeLoud-organized group in April 2015 that, to avoid conflict, eastbound bike traffic was to use the street and only westbound bike traffic was to ride in the crosswalk or across the sidewalk island between 11th and 12. However, the left-turn arrow traffic light on Gideon to 12th is not properly sequenced with the bike green light, thus dramatically discouraging this.

Significant two-way conflict occurs on the sidewalk island and in the crosswalk, especially during bicycle rush hour.

This set-up is “bikes-on-sidewalk BS”.

1. Eastbound cyclists should use the street to get from Tilikum Way to Clinton.

2. The light sequencing at 12th should be synched so that cyclists get a left-turn arrow when the eastbound bike light is green.

3. The signs and stenciling directing eastbound bicyclists to use the crosswalk and sidewalk island should be removed.

4. Signage and pavement markings directing cyclists to proceed left to Clinton, straight to Gideon, and right to Milwaukie could be considered if located inside the green bike box in the bus lane.

I hope Scott Kocher and his client will consider a legal change to the stipulation for these pavement markings in their lawsuit settlement. Their good intentions have only served to further codify a mistake that should be corrected instead.

A quibble, but the words should be printed top to bottom or made smaller so they make sense in one gulp at bike speed. We’re not cars.

They actually are printed top to bottom

They look “top to bottom” to me.

Sadly, these white stencils on grey concrete are going to loose their effectiveness soon (especially in low light winter conditions)…I wish local agencies would always use the black outlined stencils when planning concrete facilities. Yes it costs more but it works longer.

I was there a couple of times recently and I took for granted that the green markings in the crosswalk are for bikes and the white is for pedestrians. If that’s what they meant, they screwed up by making the green section way too narrow for bidirectional bike traffic. Also, I fail to understand why bikes and pedestrians have to be separated only at the crossing, given that they are not separated in the rest of the multiuse path. If PBOT meant to signify the direction of traffic by color, then they really screwed up by using nonstandard and ambiguous markings. If there’s anything PBOT should’ve fixed, it’s the traffic signal phases that force cyclists and pedestrians to wait way the hell too long despite little cross traffic. If cyclists regularly ignore the light, which they do in this section, that’s an indication of a major design flaw.

PBOT, we need to talk about your paint fetish.

Thank you, I did not know that.

PBOT: setting new standards with every project, and with every modification to a project

Could we just get the standard green wayfinding signs, but with much bigger text?
Those signs are usually pretty accurate and helpful, aside for needing to be stopped, 4 feet in front of one to actually read it (not exactly conducive to biking).

When sitting-in on the Tilikum planning meetings I offered the suggestion that one side of the structure should be two-way for pedestrians and the other side two-way for cyclists. Someone mumbled that ADA would not allow that, for what reason I do not to this day understand.

The completely separated design would be safer and more comfortable for pedestrians, plus making approaches for both bikes and walkers much simpler both west and east, even as far east as 12th and even to Milwaukie.

Ultimately it probably will be reconfigured like that. The mess at Clinton and elsewhere then could be cleared up.

They are not countless, they have names and stories. You speak as if the homeless were human garbage and the landfill is overflowing on our streets. I’m not happy with the current situation, but your disflgusting use of them in an argument you have little dedication too exemplifies what the real problem is. You can’t just bash heads in and make problems go away.

PBOT also recently added a far-side bike signal here, I believe. That was previously a constant source of confusion for people who waited past the small near side signal head.

Hey PBoT, 6” of white duct tape and clint becomes something a little different.

ha!
The legacy of incompetent planning and execution by TriMet gets better with every passing year. Can’t wait to vote for the Purple Line!

It’s just amazing how many out of work transportation planners lurk on this site.

Sign up for those jobs and show us how to do it better.

From the beginning they should have designed and constructed on Tilikum Way a bike/ped bridge span over the entire Milwaukie/SE 12th intersection with long ramps ala the Tilikum Bridge rise and fall; constructed a bridge leg north/south over all of the tracks off the Tilikum bike/ped span at 12th; closed Clinton from SE 12th to 13th; provided local access only to address 1225 from SE 13th, or buy the property and used the entire ROW; used the Clinton Right of Way between 12th and 13th to construct a stairway/helix ramp/ elevator (moved from SE 16th crossing over RR tracks to SE 12th). North/south bike/ped traffic still has the crossing of the tracks to navigate but how much of that is there in comparison to the east/west traffic. This design would have eliminated nearly all of the interaction with motorized vehicles and rail traffic and actually be safe for bikes and peds.

Middle of the Road Guy
It’s just amazing how many out of work transportation planners lurk on this site.Sign up for those jobs and show us how to do it better.Recommended 1

Well, I have been known to lurk from time to time. I’ll own up to that.

But never have I been employed as a transportation planner.

Unless one counts my brief career as a young man in rocket science.