Family Biking: How to fit two tweens on a family bike (the end) 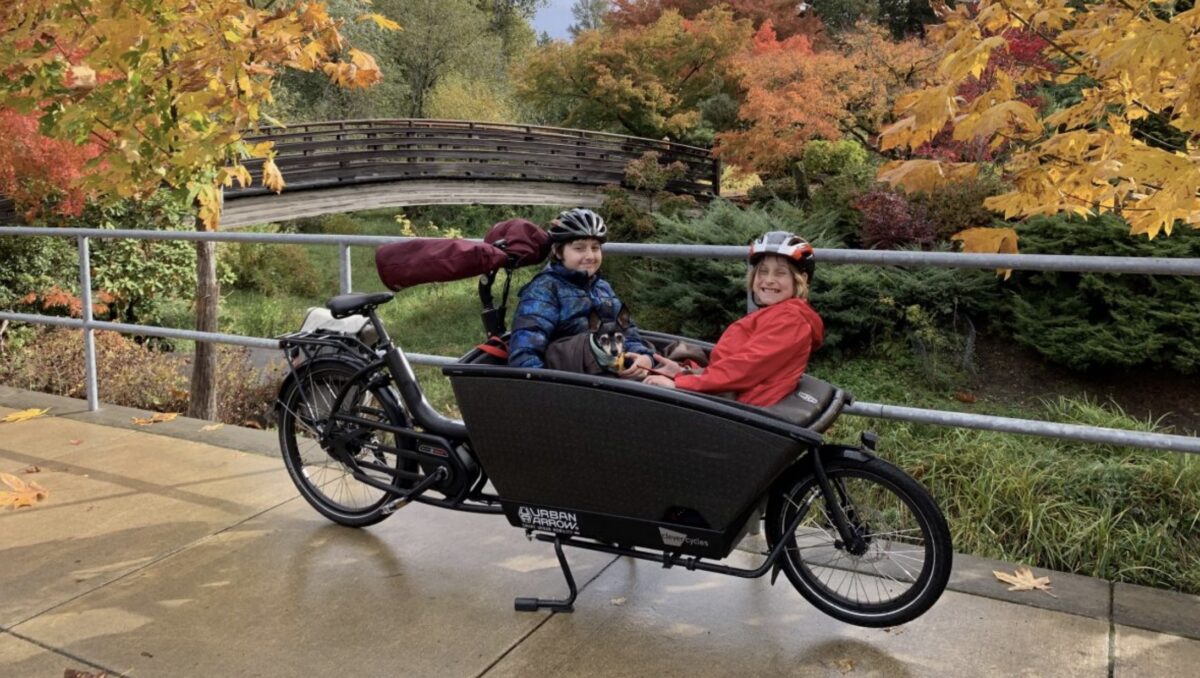 The Urban Arrow was comfy for a 30-mile day.
(Photos: Madi Carlson)

It’s time for the final installment in my series of posts about carrying two bigger kids on a family bike (don’t miss part one, part two, and part three). I’ve come to the conclusion that there’s no simple, off-the-shelf solution to fitting a 10 and a 12-year old weighing 170 pounds onto a bike, but there are solutions out there and some of them don’t take much customization. And that’s just today, who knows what the near future may yield as the families with small kids on e-cargo bikes find they need bigger solutions and the market is ready for what I’m exploring now.

I don’t think this is such a far-fetched idea: 12 years ago it was very difficult to find a kid bike seat. I scored mine on eBay after much searching and bidding, kicking myself for not buying one when visiting my relatives in the Netherlands six months earlier, assuming I could find one just as easily at home.

My first post led to me getting to borrow an Urban Arrow Family model. If the interior of the box was an inch or two wider it would work perfectly for my needs. As it is, I need one kid to sit on the front bench, facing backwards, which means the weather shield won’t fit over him. So it works, even if it’s not the perfect solution, and I’ve learned how great it is to maneuver this much cargo weight in the low front box — I can walk the Urban Arrow while it’s full of kid weight whereas I can barely hold my Surly Big Dummy longtail cargo bike upright.

But what does work well for two bigger kids? A lot of things! This isn’t by any means a comprehensive list, but I’ve got some great ideas. For the solutions with just the adult pedaling, most riders will want an e-assisted version for a two-tween load. Many will even want an e-assist for the bikes that have pedals for everyone. Oversized bikes are heavy and kids don’t always provide enough pedal power to make biking in tandem easy enough. 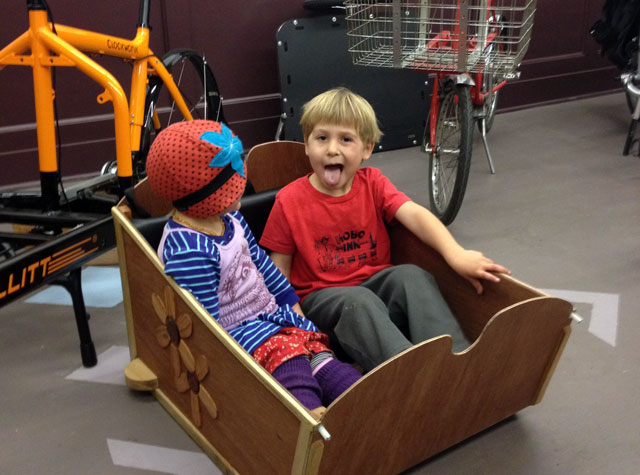 Picture this two-kid Badger box with a third four-year old. That’s the width of the three-kid box.

The Portland-made BadgerBikes three-kid box on a Bullitt or E-Bullitt at Splendid Cycles here in Portland will hold two big kids.

➤ Custom bakfiets and box
Jake Ryder builds custom cargo bikes and boxes for his Fiets of Strength brand. Made here in Portland, your regular bike converted into an appropriately big cargo bike.

The Madsen bucket bike holds four little kids on two benches so it’s definitely got room for two big kids. Madsen recently came out with an e-assist version and Seattle’s Bike Swift makes a Madsen electric assist kit for those wishing to convert an analog Madsen. 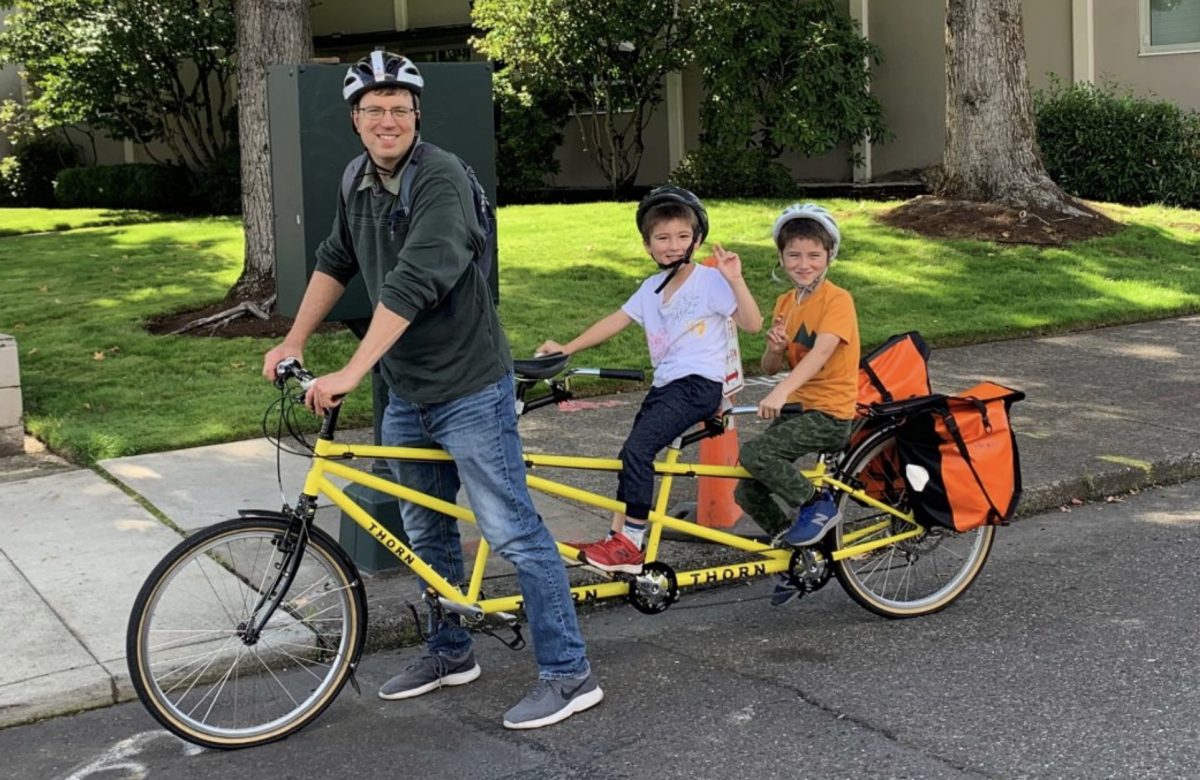 A bike built for three.

The bike in my photo is a Me’n’u2 triple from Thorn Cycles in the UK. Closer to home, Bike Friday and Co-Motion Cycles, both in Eugene make triples. My tandem is a used Rodriguez from Seattle and they also make triples (and then some!). 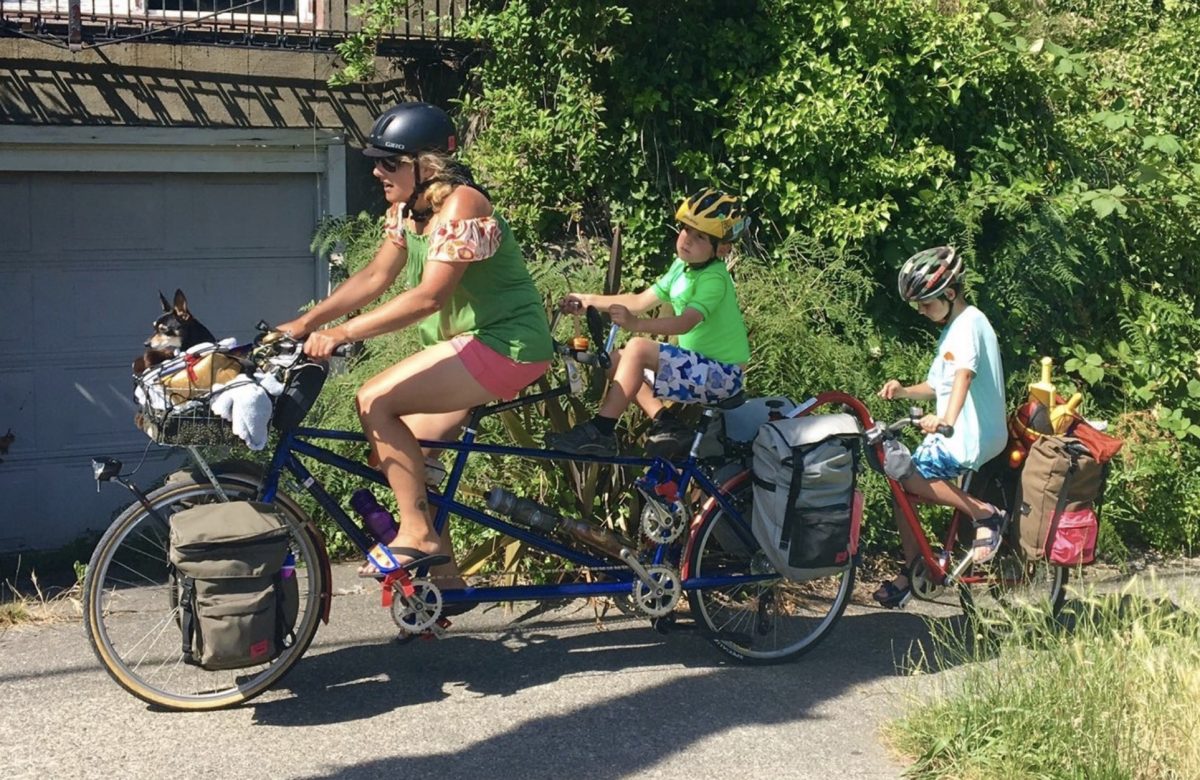 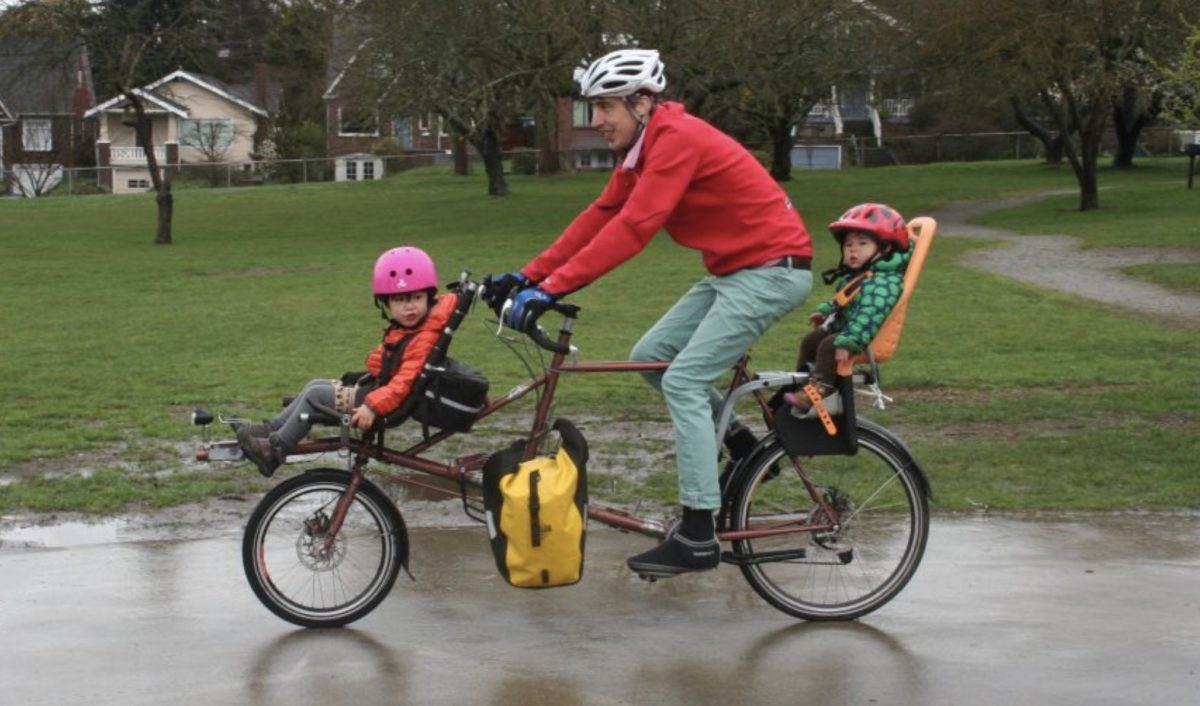 This, but with a trailer bike on the back is fun for three pedalers.

A similar and perhaps simpler solution is to attach a Burley Piccolo trailercycle (weight limit of 85 pounds) behind a tandem bike. We used to ride like this, but my lighter kid is a more consistent pedaler and therefore better tandem stoker and my heavier kid is now too heavy for the Piccolo. I would like to work at riding the tandem (sans Piccolo) with just my heavier kid to work on our communication and his cadence, but my knees aren’t so keen on this idea.

➤ Semirecumbent tandem plus trailer bike
Semirecument tandems, like the Hase Pino and Bilenky Viewpoint are wonderfully versatile family bikes, perfect for adult and kid stokers alike (as well as great front perches for infant car seats) with short wheelbase that makes it easy to stick a trailer bike off the back.

➤ Longtail conversion for all of the above 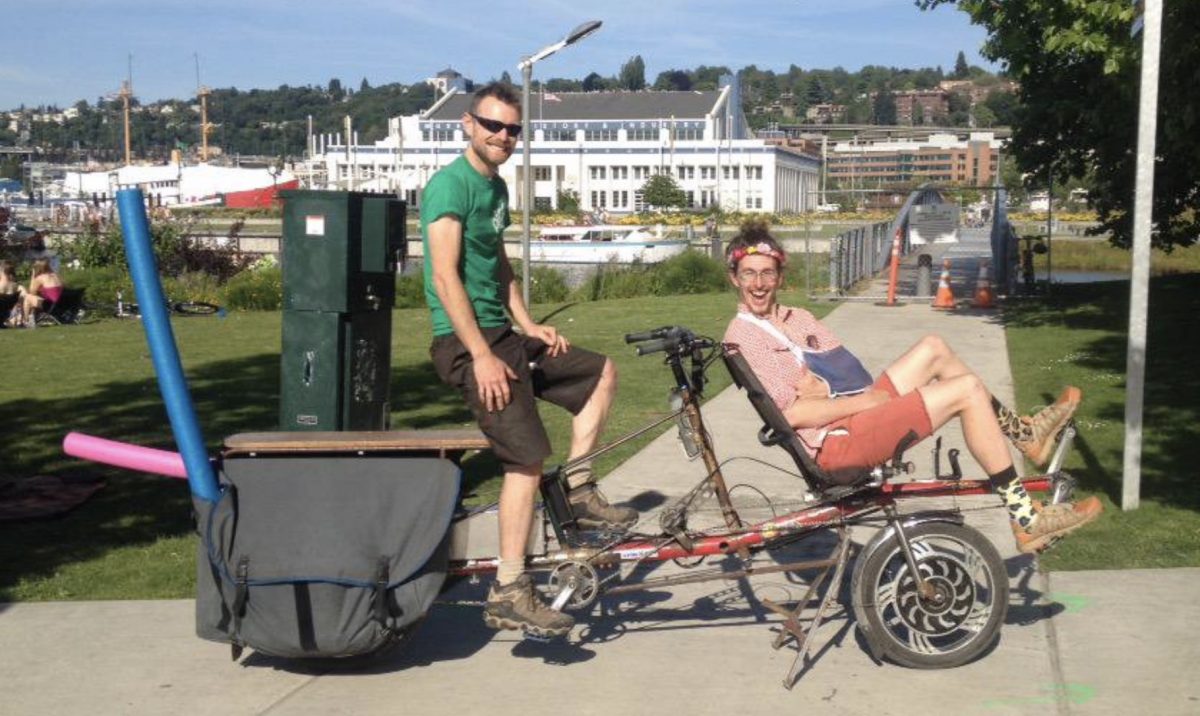 Well, not the Madsen bucket bike, but everything else. Xtracycle’s current bike extender is called the Leap and it works on big wheels and 20-inch wheels. Older, cheaper Xtracycle FreeRadical conversion kits are sometimes easy to find used or as NOS (new old stock a.k.a. unused). Adding a Leap to a tandem adds both cargo space and room for one kid to sit.

Shamu is probably the coolest bike I know. It’s an e-assisted semi-recumbent extra-longtail tandem cargo bike. Created and owned by Haulin’ Colin of Cyclefab in Seattle.

➤ Or a very sturdy rear rack
I’ve never seen an Xtracycled bakfiets, but bakfietsen tend to come with very sturdy racks that can support the weight of a full-sized person. I have seen bakfietsen (mainly Bullitts) with the Cycletrucks Caddyrack. The Caddyrack provides a large spot to put a cushion (or kid seat or trailer bike) and can also tow kid bikes.

In the meantime, I’m still having a blast carrying both my kids easily for the first time since they were little and I’m happily taking them places I would have grumbled about if we were on three bikes. I won’t be replacing my beloved cargo bike, but this is definitely a wonderful car replacement for someone who wants to carry two kids aged through eight and 10 (and even with a third smaller kid on the second bench) with the weather shield.

Do you know of any other creative bike solutions that carry three people aged 10 and up at once? Thanks for reading!

Remember, we’re always looking for people to profile. Get in touch at madidotcom [at] gmail [dot] com if it sounds like fun to you.

I’ve long wanted a Brown Cycles “Kids Tandem”, there’s at least one of them floating around Portland. https://browncycles.com/bc/kidz-tandem/

Then, a comment on using a Yep on a rear rack + panniers. Make sure that any rack you buy, is rated for over 100lbs. I’ve broken the welds on two racks when I had my son on the back of my bullet in conjunction with the yep extender & panniers.

I saw a KidzTandem just a few days ago!

WorkCycles Fr8. With the front child saddle you can carry three passengers (2 back/1 front). I’ve pedaled my spouse+5 year old+6 year old on it with relative ease. I’ve tried many cargo bikes over the years and this one is by far my favorite. I think it has a load capacity over 500 pounds and I believe there is an assist version now as well.

Oh cool! I’ve only seen those with smaller kids on them. Do you think the rear rack would hold 170 of two tweens? My 10yo is on the small size, but he’s still too big to fit in front of my on the front seat–but maybe that works OK for tall riders?

One thing to keep in mind with widths of boxes/compartments is the need for them to fit through doors. The Urban Arrows 28″ width allows it to fit in most all openings, even at a small angle as often required to fit through things just at either side of a door! And of course larger boxes take up more space in paths and clearing nearby things like pedestrians, other cyclists etc! And if a box is no wider than the handlebars it’s a handy way to reference the clearance; much like a cats whiskers!

True! I love how easy I can fit through doorways and rely on storing it indoors. I didn’t realize the “whiskers” thing–I love that! I always wanted to invent trailer whiskers back when I dragged a trailer all over.

Do Portland’s hipster kids even need bikes anymore? Seems most are being pedaled around by parents. Some of those contraptions look absolutely absurd, and expensive. Is this the coming definition of fun? Or, maybe I’m just getting too old?

Haven’t you heard? Here in Portland California is IN. Cycling is OUT.

Do you know any families who have kids and cars? I know people who have kids the same age as mine and they don’t see an alternative to driving everywhere. I’ve just been exploring options that might encourage families like those to replace car trips with bike trips, even if it means the kids aren’t doing any pedaling. I’m not sure why that message keeps getting lost in these posts and generating snarky comments.

Have you seen the Urban Arrow XL’s that are used for passenger carrying in London? http://cargobikefestival.blogspot.com/2017/07/pedal-me-maas-by-bike-on-streets-of.html

Aren’t 10 and 12 old enough and big enough to ride their own bikes? This seems like a solution looking for a problem. I know 7 year olds that pedal their own bikes.

miss_me_with_that
Aren’t 10 and 12 old enough and big enough to ride their own bikes? This seems like a solution looking for a problem. I know 7 year olds that pedal their own bikes.

My wife and I are capable of riding our own cargo bikes, but on occasion we have each ridden as a passenger on the other’s bike. Sometimes of necessity, sometimes because it just makes for a fun date night.

It could also be that a 10 and 12 year old can ride their own bikes, but that they maybe can’t practically ride them for the entirety of a 20 mile round trip.

If you really want to carry two youngsters or tweens, I recommend a triple tandem. I’ve done so with triplets by Bike Friday, Santana, and Co-Motion. All are quality machines that are very capable. Some version are convertible in that they can be configured as either a 2-person or 3-person tandem. However, do not plan to reconfigure it quickly. Plan on a conversion time of at least an hour each way.

When they are on your bike instead of their own, you need not worry about the kids making poor judgments. On a triplet, the kids are actually providing some of the motive power rather than simply being cargo.

You could have been using a triplet with your kids for several years already. With your kids being 10 and 12, I don’t think you have many more years that they will want to be riding with you.