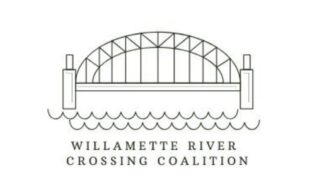 There’s a new effort to show Clackamas County Commissioners that — despite their comments at a recent meeting — there are many people who support a new carfree bridge over the Willamette River between Oak Grove and Lake Oswego. The push to boost support comes as people who live near where the bridge would be located have begun to make their voices known (see photos below).

Looking to push against that opposition, the Willamette River Crossing Coalition has launched a website and petition aimed at influencing a key vote on the Oak Grove Lake Oswego bridge project set to take place this Friday (10/25).

Last week we reported on a meeting of the Board of Clackamas County where four out of five commissioners expressed significant skepticism about the project. Despite a county survey and two official open houses that heard a strong majority in favor of the project, commissioners claimed the project doesn’t have public support.

This Friday the project’s Policy Committee will decide whether or not the project is feasible enough to warrant further study. Committee members include: Milwaukie Mayor Mark Gamba (gambam@milwaukieoregon.gov), Metro Councilor Christine Lewis (Christine.Lewis@oregonmetro.gov), Lake Oswego City Councilor Jackie Manz (jmanz@ci.oswego.or.us), and Clackamas County Commissioner Paul Savas (bcc@clackamas.us). The new group in support of the project wants to gather signatures and comments early enough to deliver them to these elected leaders prior to Friday’s vote.

“The next five days are critical if we are to keep this project moving forward,” the coalition’s action alert reads. “Currently, a well-funded opposition effort to kill the project is weakening support with local elected officials.” Here’s more from the website:

“As our region grows we need a transportation network that is safe, addresses worsening congestion, and reduces impacts on our climate. The New Willamette River Crossing between Lake Oswego and Oak Grove/Milwaukie will provide just that but it is in jeopardy. The project planning committee will vote this Friday, Oct. 25th on whether or not to continue the study for the New Willamette Crossing or kill it altogether. Your signature and testimony are needed today to keep the New Crossing alive.”

Today we received photos of yard signs from the person behind the new website. One sign complains of a view that would be changed. The other falsely claims that the bridge would included buses (there will be no transit of any kind on the bridge):

Willamette River Crossing Coalition is urging people to sign the petition, leave comments/testimony, share it with friends, and consider attending the hearing on Friday. They also encourage anyone who cares about this project to email Policy Committee members

The Policy Committee meets on Friday from 11:00 am to 1:00 pm at the Clackamas County Development Services Building (Room 115, 150 Beavercreek Road, in Oregon City).

Thanks for bringing this to our attention, Jonathan!

I live in Tualatin and I work in Milwaukie. Definitely signed. Although, I would contend that this bridge needs a bus component.

Hooray. I just signed the petition. And over the weekend I emailed each of the Clackamas County commissioners and the key people listed above. This bridge will revolutionize transportation options between Lake Oswego and points east and north. Just imagine being able to safely connect to the Trolley Trail (and on to the Springwater), instead of daring Hwy 43 (not fun) or huffing and puffing up the Tryon Creek Trail only to then endure fast, heavy motor traffic along Terwilliger.

I think this bike/ped connection would be game changing AND I think it would be a really good thing if there were a transit connection in this location. Am I missing something? Seems like a huge missed opportunity to not include the ability for at least buses to make this link, too.

Why not reverse the acronym to have the “Log Bridge,” ie LOOG Bridge?

Because then everyone will call it the loogie bridge.

The “Loogie” bridge would definitely be slippery when wet.

Maybe they will paint it yellow-green.

It’s over 11 miles between the Sellwood Bridge and the John McLoughlin Bridge via the roads west of the Willamette. That’s an outrageous detour that results in car travel being the default choice for most residents. The OGLO would be transformative for connectivity of the regional network.

Transit would be nice too and instead the southern communities of the metro would rather buses wait in the same traffic as everyone else.

Maybe a stupid question, but what’s wrong if it does include transit? Is it just reflexive hatred towards transit? I know they mentioned cost, but I’m not convinced that’s a good faith argument since Clackamas County is lobbying for Highway 212 and other car projects for M2020 bond.

Reflexive hatred of transit, by the Clackamas county commissioners, absolutely. And misplaced hatred, at that.
It’s crucial to state that trimet’s had no interest in putting transit on the bridge/creating new routes through the crossing. There reasoning was lack of density and potential ridership on a bus line from LO to OG. It was 100% Clackamas Metro that was pushing for it, because they push for transit to be added to every project.

The commissioners would appear to think that cars are for serious adults going about real business and everything else is either recreation or a total waste of money.

More and better transit connections will benefit the region, but there’s already the train bridge that OGLO will parallel, so I’d say, let’s win this battle, get the ped/bike car-free bridge, then build political will to add transit on the existing bridge. It worked for the orange line, coming out of Milwaukie, sharing tracks with Union Pacific.
That existing bridge could serve either a new/extended max like or street car. Or, with some mods, it could let buses across.

Major correction: the max orange line has it’s own overpass bridge, at 99e and se River Rd, parallel to the railroad bridge.

So that would lead me to believe a proposed transit line would require either an additional bridge at the Willamette river, unless the railroad bridge could carry the transit lines on its right of way and tracks.

Good question– any Clack Co people here who can answer the question? Or, Jonathan, can you ask the commissioners what the deal is against transit in Clackamas County?

It’s so odd because people complain all the time about the terrible congestion, but are flatly against transit (and bicycle) projects that would alleviate the problem. It’s weird.

It’s complicated. And it’s not just about transit IMO. It’s about not letting Metro get too much power and about a general unease about “Portland creep”. Transit is also much more expensive and I noticed these commissioners seemed to all like the carfree bridge idea when it was about $10 million (which seems insanely low to me), but once the price started going up they’ve had to find ways to dislike the idea. What this reveals is that biking/walking — by itself – is much more palatable to Clack Co region than transit. This also has to do with how Metro came in at the last minute. That’s a perfect example of what Clack Co politicians/the public don’t like: “big gov’t meddling in our affairs”. There’s a lot to unpack here. Don’t forget that in many ways the OGLO is seen by some as nothing more than a bargaining chip to get votes freeway/highway expansions in T2020 (and vice versa). Just like ODOT used Safe Routes Funding and a tiny bit of active transportation money (relatively, IMO) in the HB2017 bill to get everyone to look the other way at all the freeway/highway money it included. And it worked!

Oh, another thing with how transit is perceived south of Portland is that it is something that “they” “those people” use. I think the “crime train” mentality exists south of Portland as strongly as it exists north of Portland. But of course these commissioners are too smart to actually express anything that could be construed like that … which is why I thought Commissioner Schrader’s “you know” comment about Springwater was so revealing.

If the suburban communities don’t want transit, then why are we forcing it on them? Portland itself has plenty of opportunity for new and improved service, esp on the east side. Maybe the Portland Creep would be less of a creep if it was instead something to envy. Build it where people want it first, and expand later.

There are plenty of people in suburban communities who do want transit. Their voices are drowned out by the people who think that Portlanders should be subsidizing SOV commutes by pointlessly widening highways.

It’s a common misconception that transit reduces congestion. It generally does not, because of induced demand. Transit gives people options, but people from LO don’t want that option. They want wider roads, but that is bad policy for many reasons.

It’s also worth reframing the cost discussion in terms of billions of dollars vs actual improvements made.

I-405 in LA added a new travel lane for cars, $1.6 billion. No improvement in traffic speeds.
I-5 proposed widening at the Rose Quarter, $0.5 billion, ODOT has admitted it won’t speed up traffic or reduce congestion.
OGLO bridge, $0.042 billion, by design can’t contribute to motor vehicle congestion, all but guaranteed to get commuters out of cars, going to and from LO and oak Grove.

Yeah, $42 million sounds like a big number, but it’s a rounding error on most municipal or regional projects that people just assume need to be paid for, no matter what.

That must be some really emphatic bussing. I bet they really hate the Kiss Cam.

Don’t laugh, but there are a significant number of people in LO and other suburbs who believe that homeless people will use transit (or the bike bridge) to move to LO and set up homeless encampments.

Straight shot to Tryon Creek State Park. It’s not a baseless concern and it’s completely disingenuous and selectively blind to rag on anyone being concerned about it–even evil Lake Oswegans. Look at what has happened to the Springwater, the 205 Path, Portland’s parks and green spaces. It’s not the Portland of the 90s, and those proposing new connectors/pathways have to consider the very real project impacts according to the conditions of today and the likely future–not the past. Until Portland truly addresses real shelter for the homeless (and I don’t count allowing tent cities), that’s not an idle worry, the proposed bridge being used as a conduit to a vast forested public park, perfect for setting up tents.

I would have been for this bridge in the past, wholeheartedly. I am not, now, given the present state of the Portland region.

That noise is really just a dog whistle.

Vote Up00Vote Down
« ODOT will close northbound span of I-5 Bridge for 9 days next year
Family Biking: Thoughts on carrying tweens and biking less »