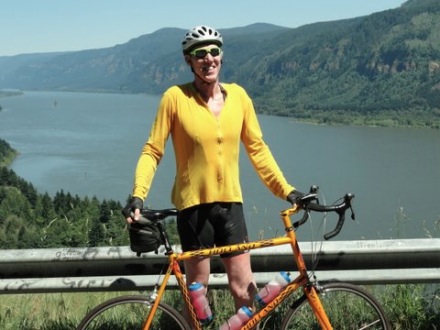 Bill Walton loves bikes. From his college days riding to class at UCLA to his daily ride through Northwest Portland to practice at the Rose Garden Memorial Coliseum, bicycling has always been a part of Walton’s life. So, when the nearly seven-foot tall, Hall of Fame basketball legend and member of the Portland Trail Blazers 1977 NBA Championship team visited Portland for a speaking gig earlier this month, he used the trip as a perfect excuse to put in some miles on the open road.

“He can hardly walk, but can ride like crazy.”
— Jeff Bernards, after a long ride in the Gorge with Bill Walton

After getting in touch with Walton through the Blazers organization, I put him in touch with my friend and bike ride planning expert Jeff Bernards. Jeff is not only an experienced, long-distance ride leader (he currently works with Portland Bicycle Tours), he’s also the biggest Blazers fan I know. Jeff showed Bill some of the best rides in our region and shared photos and thoughts about the experience… 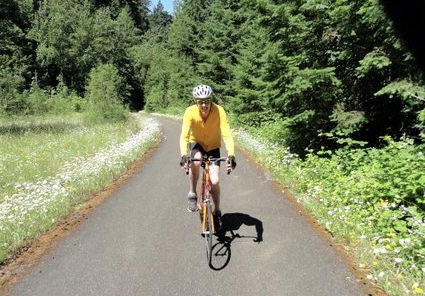 I didn’t know a lot of the details regarding Bill Walton’s basketball career, so I checked out Wikipedia. He has accomplished so much I was a little stunned, he’s so humble and unassuming — except that he’s 6′ 11″. 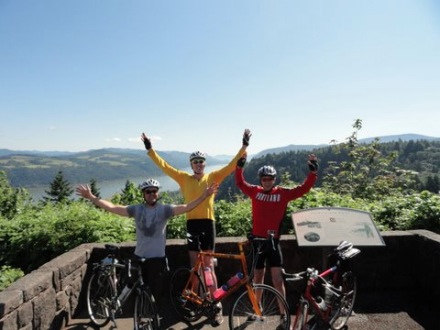 We road to Cascade Locks and grabbed a bite at the local grocery store. He needed to sit and the only nearby seat was a flat bed trailer parked on the street. The owners were so excited to be able to offer Bill a seat. They talked and talked about how Bill was the reason the Blazers won the finals in ’77. We walked over Bridge of the Gods then headed 4 or 5 miles east of Skamania. 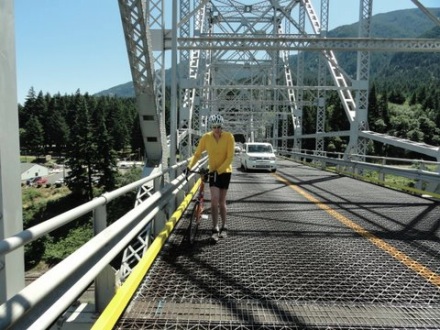 I said we wouldn’t ride back as hard as we rode out. I was so wrong, he powered it back too. He finally pulled away from me at Washougal. 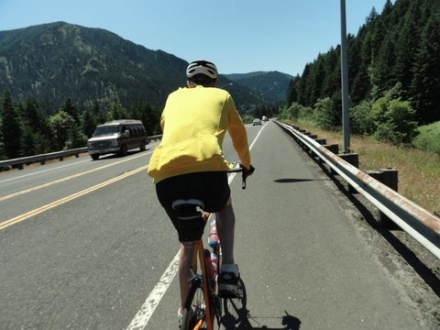 After our adventure in Gorge, Bill was just getting warmed up. He still wanted to ride out to the coast (by himself, with his wife driving a sag vehicle). I put together a route for him to Astoria, via the Banks-Vernonia Trail and Hwy 202 and then the Lewis & Clark Rd. to Seaside and Hwy 101 to Cannon Beach. He called me when he got to Cannon Beach. He did the whole ride in 10 hours! (I swear when we did the Gorge ride he was riding 15 to 18 mph, constantly. I could get him on the hills because he didn’t have the clipless pedals (they don’t have them in his size)).

He called me from his Portland hotel and gave a big “WOW!” over and over. He thought it was an amazing adventure.

This guy really loves to ride, and his energy and enthusiasm for biking — and for life — are infectious. Here’s an interesting video he did in 1974, when he was injured and his ever-positive attitude just shines through. He’s had 37 surgeries; and the last one saved his life. He use to have to eat laying on his stomach because of the pain.

So if you hear people say they can’t ride, because of a little pain, let them read about Bill Walton’s recovery and how cycling saved his life. His life and living story should be an inspiration to all of us. 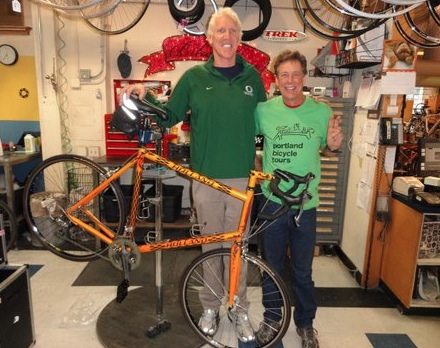 Nice! He ought to ride with Greg Od……oh wait, never mind.

Inspiring story. Thats putting in some miles, especially considering the injuries he has overcome during his career. I’m sure he could have pulled a one dayer on the STP. Ride on Bill.

Check out “Idol Time” by Larry Colton, which nicely chronicles an Oregon coast bicycling adventure with Walton and the author in the summer of 1977. It’s a fun read for anyone interested in that era of Blazerdom. Walton was one of the all-time greats.

Oh, and one small nitpick: Walton never rode from NW to the Rose Garden; it didn’t exist yet! And they practiced at MJCC in the SW hills.

Would it be possible for you to tell us the route you took?

Way to go, Jeff!!! What a great story, thanks for sharing it.

Bill also wrote a pretty good road cycling book back when.
I don’t know if it’s widely known but just a few years ago he was near-suicidal from constant back pain. Some miracle pioneering surgical technique saved his life.

A number of years ago, I saw Bill walking down 23rd Ave with a friend. He had the gait of an arthritic 75-year-old war veteran. Riding must be such a relief for those poor knees (and probably other joints) of his.

why walk over the Bridge of the Gods?

Bill is a really nice guy.

He was a customer at the bike shop I managed in San Diego.

A real challenge getting clothes to fit him.

As a testament to how much he loves cycling, Bill tried to ride his bike in the victory parade when the Blazers won the NBA Championship in ’77. He made it only a few blocks and had to retreat to a car because the mobs were swarming him.

Spiffy
why walk over the Bridge of the Gods?

It’s a pretty gnarly open grate deck with no sidewalk. The odds of going down are pretty high. I’ve ridden it once, and I’ll never ride it again. Walking is the prudent way to cross.

Do they hit you up for a toll fee on a bike?

Yeah, Sasquatch was riding to the coast. You know how many people would have ridden with him if anyone had known. It’s like when Lance goes to a city and thousands show up.

Spiffy
why walk over the Bridge of the Gods?

It’s a pretty gnarly open grate deck with no sidewalk. The odds of going down are pretty high. I’ve ridden it once, and I’ll never ride it again. Walking is the prudent way to cross.

Hmmm… I lead the recumbent gang out to the Bridge of the Gods every year. It makes about an 85 mile loop from the I-205 bridge. Even my wife (who’s a pretty timid rider) rides her bike across the BOG. The only time I’ve walked it was after it had rained.

To each, their own, I suppose. I don’t feel comfortable riding it on a racing bike with 23mm tires, nor does Bill evidently. But I would think it’s a different experience on a ‘bent.

I love it. What a great story ! It always great to get these big guys on bikes. I am thinking of riding to the coast also this summer.

Some great footage of Big Bill doing training rides in rural Oregon in the 1978 film Fast Break, which showed at the NW Film Center a couple years back.

This is absolutely the most legendary, epic, all time great story of bicycling I have ever read. No, really… it is simply amazing… the world is spinning, it’s great, and this story is going to go down as THE quintessential testament to the amazing, legendary, epic, STUNNING experience that is cycling in Oregon. And, it’s also a GREAT, Legendary story. I’m stupefied, Amazed, baffled and stunned at how great and iconic it is. Did I mention how great and amazing it is?

I can hear it now. Funny.

Wow, I’m sorry somebody pissed in your corn flakes this morning.

Why walk the bridge of the gods?
I would guess to enjoy it more? Take in the view? slow down and smell the roses?…