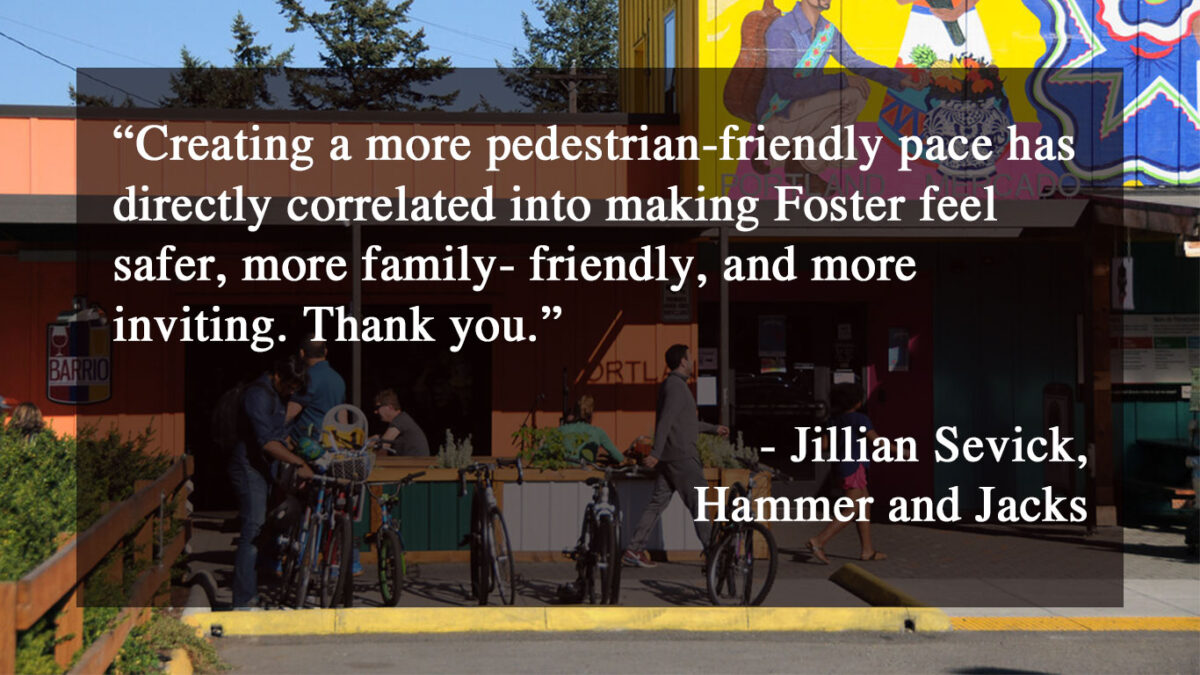 Here’s something that doesn’t happen very often: Instead of backlash over a transportation project on a major arterial, Mayor Ted Wheeler and his fellow commissioners heard praise.


At this morning’s City Council session, four people who represent Foster-area businesses used the open testimony period to share appreciation for the city’s Foster Transportation and Streetscape Project. Years in the making, the project was completed last month.

A notoriously fast and dangerous “freeway” (a term former Mayor Sam Adams once used to describe it), there was always a wonderful commercial shopping district just waiting to emerge from the din and dust of all that automobile supremacy. Since PBOT changed the lane configuration to create dedicated spaces for cycling and walking and less space for driving, the potential of this street that’s home to over 200 businesses has finally been realized.

Jillian Sevick owns the Hammer and Jacks toy store and play area on SE 64th and Foster. With her 5 and 2-year old in her arms she testified this morning that the project has changed the street for the better. “My family and I regularly travel the Foster corridor by bike, car, transit and foot,” she said. “I have spent many years biking in Portland and I have to say the wide lanes, the green boxes, and the double-white lines have transformed Foster from a road I would have never considered biking on, to a pleasure.” 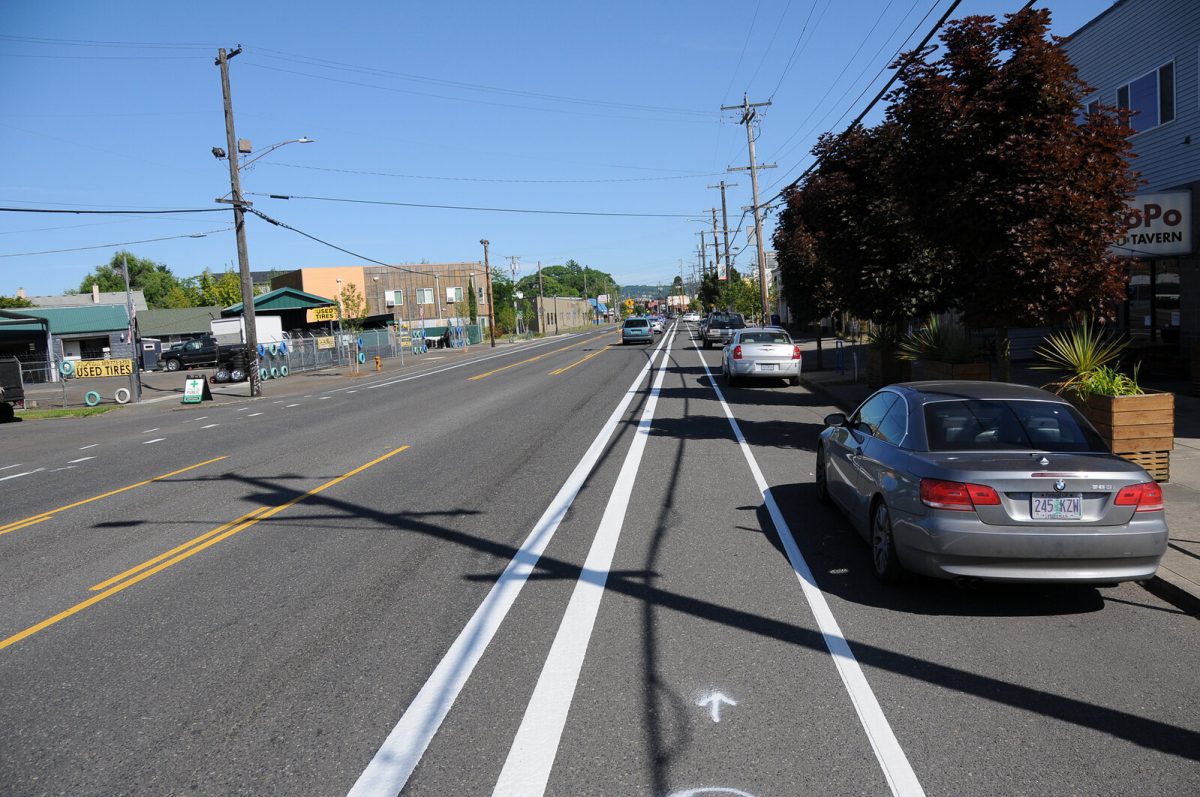 “Day-in and day-out,” Sevick continued, “families walk through my door who a year ago would not traverse Foster and now walk to shops, out to coffee, for groceries, or simply for fresh air. Creating a more pedestrian-friendly pace has directly correlated into making Foster feel safer, more family- friendly, and more inviting. Thank you.”

Another noteworthy result of the project Sevick called out is how people can now move around after parking curbside without being “pinned against our cars and honked at while trying to retrieve wriggling children.”

Another business owner, Matthew Micetic of Red Castle Games (and a former president of the Foster Area Business Association) planned to testify but was unable to make it. Venture Portland Director Heather Hoell spoke on his behalf. After praising the project, Micetic’s testimony read, “Some car drivers have unfortunately rejected the new safer Foster and we’re seeing increased instances of protest driving in bike lanes and other unsafe behaviors.” Micetic requested a 90-days of increased enforcement by the Portland Police Bureau (Mayor Wheeler said he’d raise the question with the Chief and East Precinct).

This is also happening a lot in Gateway on the new Halsey streetscape project. And a few people still park in the protected bike lane.

so, what exactly happened to the traffic calming islands which were part of the new design plan?

There’s a euphemism if ever I’ve heard one. How about “careless” or “reckless” driving?

Admittedly, it can feel like a take-back to lose a driving lane after years of being privileged with over-allocated lane space, but come on.

“Protest driving” is not a euphemism for reckless or careless driving. There is nothing “careless” or inattentive in the deliberate defiance
and threatening maneuvers some drivers are exhibiting on the new Foster.

Chris I
Reply to  Betsy Reese

I think that using the bike lane and/or median to pass stopped vehicles fits the definition of careless driving pretty well, as defined in ORS 811.135:

“A person commits the offense of careless driving if the person drives any vehicle upon a highway or other premises described in this section in a manner that endangers or would be likely to endanger any person or property.”

Agreed, Betsy. I only meant to point out that no driver can possibly be cited for “protest” driving, as it’s not defined in the ORS. Also, careless does seem to imply some cavalier “oopsie” move done without thinking. I think “reckless” would be closest.

Red Castle is amazing by the way. Awesome store.

Euroclassic Furniture is plastered with large signs all over the outside of the building, complaining about the changes.

SERider
Reply to  Dan A

As they have been for the last 4 years.

They have refused to participate in the process, and just like to make a stink.

Mike C
Reply to  Dan A

Thanks for the 411. Happy to not give them my business.

Wasn’t there an article in one of our publications where an old lady was hit and killed?

The Mayor will “raise the question” with the police chief? Hope there was some emphasis in there that just didn’t come through the medium.

I live in east portland and the changes are huge for me. they save me a ton of time when i need to get into town. the whole street feels more alive now. i’d never of used it before.