Prior to the start of the school year in 2016, the dangerous section of North Columbia Blvd near George Middle School in St. Johns was on the city’s radar as a “high crash corridor”; but there wasn’t any momentum or urgency to make it safer. That all changed when then 15-year-old Bradley Fortner was hit and seriously injured by a driver while walking to school.

Now, three years later, the Portland Bureau of Transportation has nearly settled a suite of updates that could slow drivers down, limit their turns, and significantly improve safety.


After the collision, we learned locals have been afraid to cross the street in front of their homes for many years. The wide and fast conditions on Columbia Blvd make it a de facto highway that has all but cutoff an entire residential area from schools, restaurants and other destinations. Fortner’s collision forced PBOT and Oregon House Speaker Tina Kotek to take notice.

At Portland City Council this week, PBOT will accept a $1.5 million grant from the Oregon Department of Transportation. The funds will allow PBOT to make final design decisions and build several updates to nearby streets later this year. PBOT has already used $650,000 in System Development Charges to get the project to this point.

Since our last report in February 2018, PBOT has come up with designs based in part on feedback from the community. The project will be a mix of “access management” that will constrain driving movements from adjacent streets, and a new signal and crossing updates on Columbia. PBOT is also studying whether or not to remove or retain the existing overpass that has fallen into disrepair and gets little use.

Below is the official rendering of the access management elements of the project just east of George Middle School. 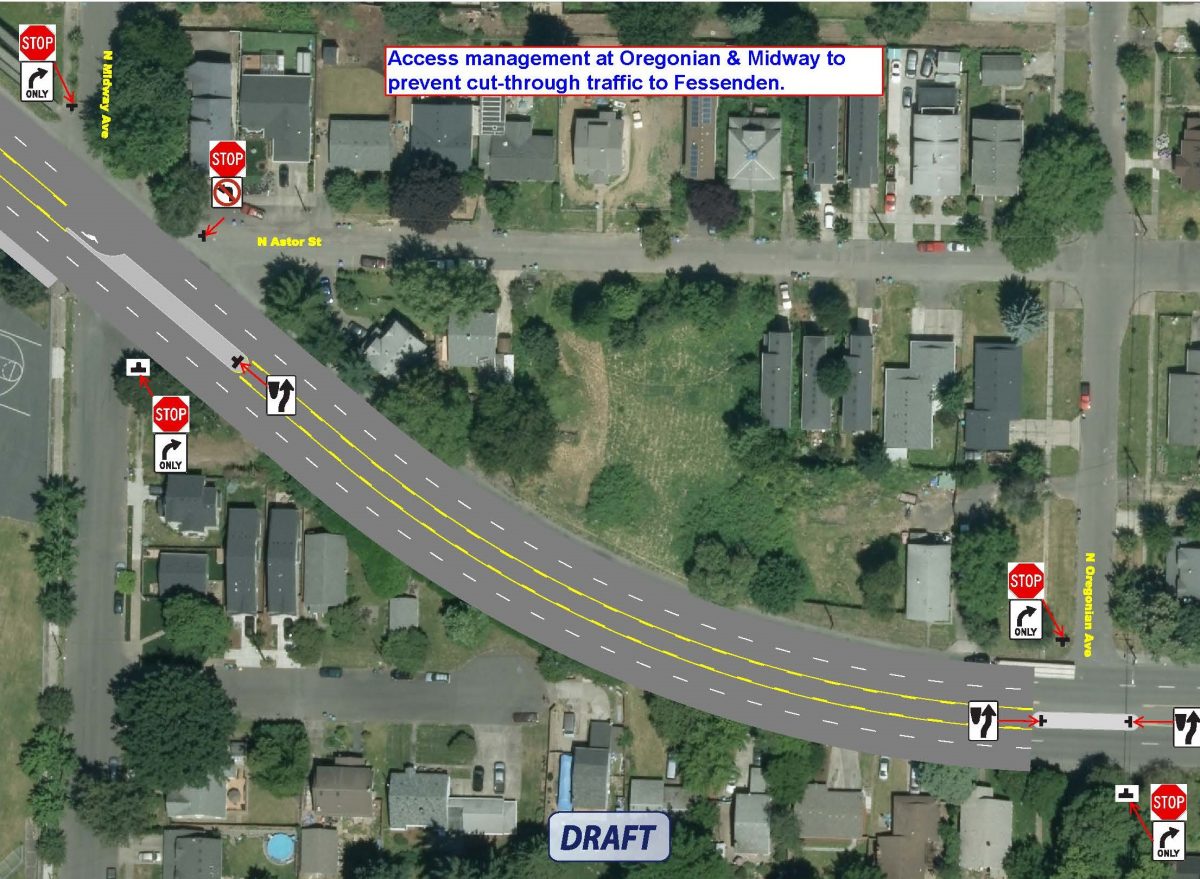 And here’s what PBOT says about it:

“Due to concerns from the community, PBOT is recommending the installation of two access management islands on Columbia Blvd at Midway and Oregonian. Almost half of the traffic from Columbia turns left on the local neighborhood street, Midway St. By eliminating the left turn access from Columbia to Midway and Oregonian, we will be forcing traffic to use the existing traffic signal at Macrum. By installing these two islands we also understand that we will need to modify the timing on the existing signal at Macrum.”

The main piece of the project will be another set of medians and a full traffic signal at or near the intersection of Columbia and N Bank Street. PBOT has drawn-up two options and they’re asking for community feedback before making a final decision. 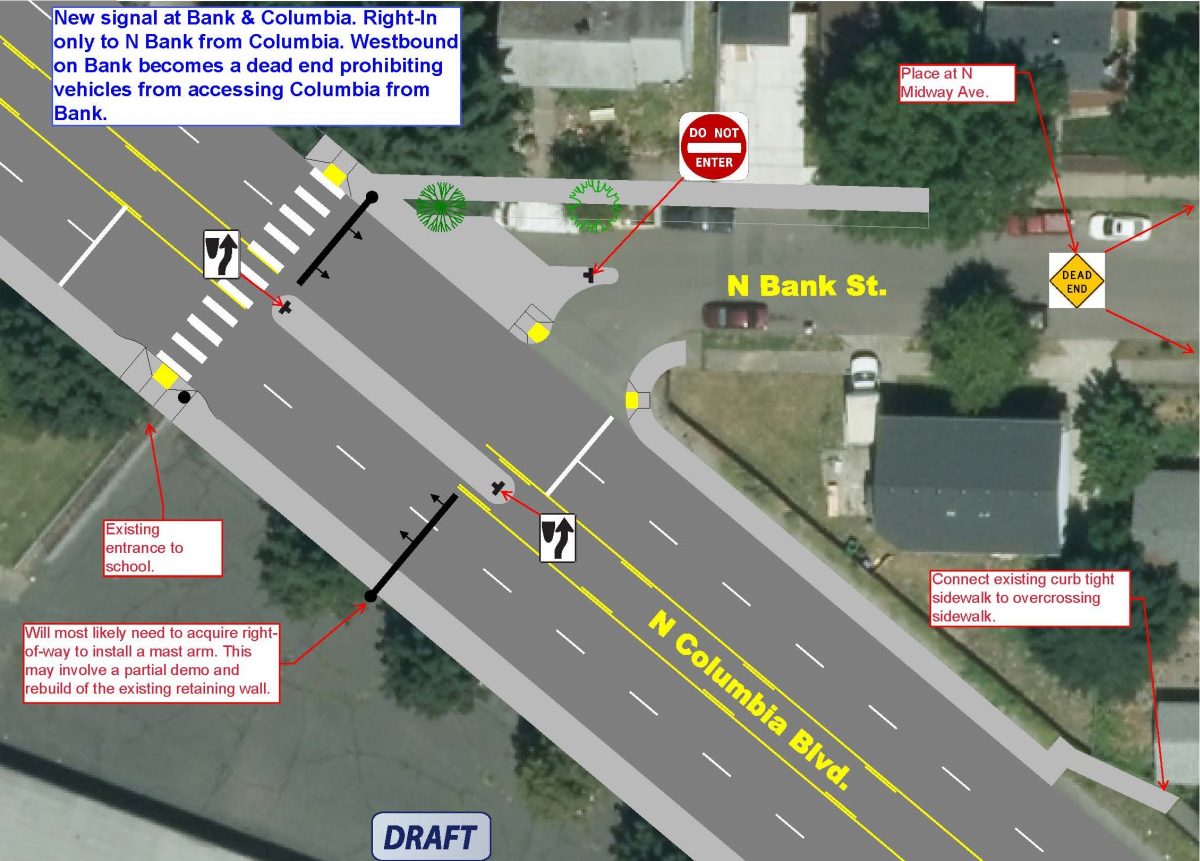 And here’s Option B: 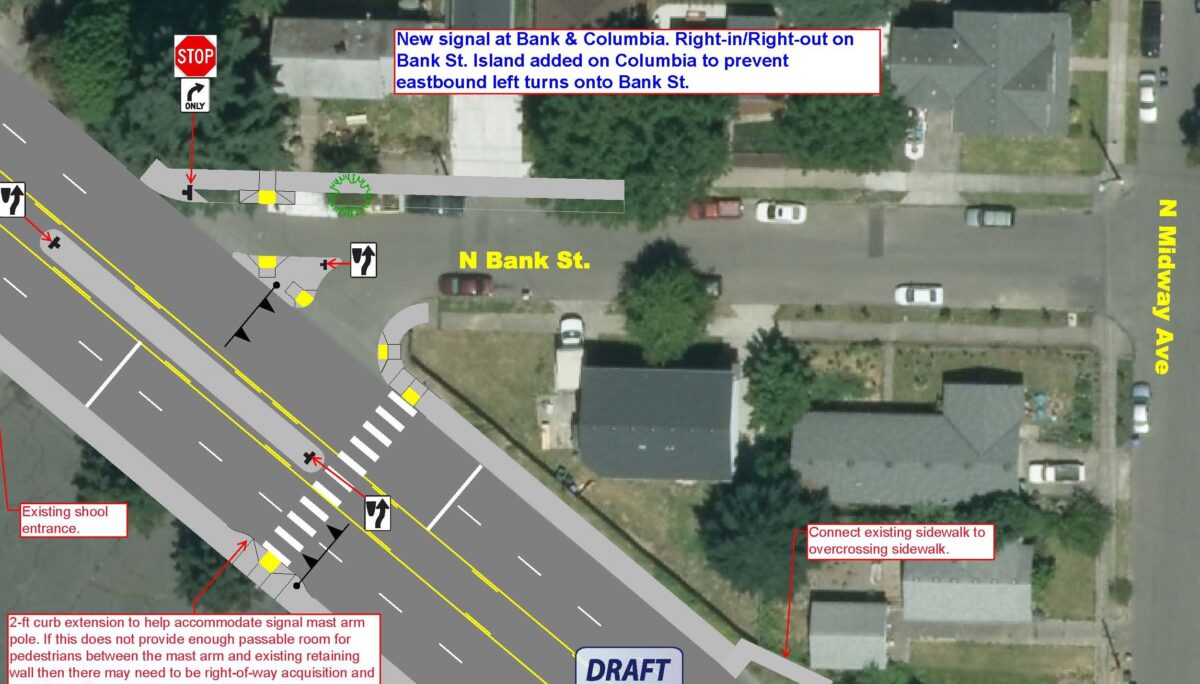 Winton Sandino is the PBOT project manager. If you have specific feedback about the proposals, email him at winston.sandino@portlandoregon.gov.

According to a city spokesperson, PBOT is still doing some outreach and a final decision about the design should happen in the “next month or so.” Construction is scheduled to begin in fall of this year.

In the first plan view, there are zero sidewalks shown. The school appears on the far left, but the map clearly shows there is no safe way to access the school along Columbia or through the neighborhoods! Am I missing something? This appears to keep the 4 lanes of high-speed traffic racing right through here with no way for people travel (unless they are in a car). This proposal looks like an absolute fail to me.

I totally agree, the 4-lanes just means they are perpetuating and exacerbating an existing problem of encouraging high car speeds. What they need to do is create a one-block single-lane bottleneck every few blocks, including in this area, to slow traffic down to 20 mph (twenty is plenty), a proper urban freight speed.

This design may be exactly the right thing to do but it always jumps out just how expensive signals are (ballpark $1m). What’s cheap are speed bumps (or humps or cushions). $2.1m would get you 700 of them.

This design is antithesis of Vision Zero. Looking at these maps, the value of PBOT and our state is clearly on display: we value moving freight quickly much more than the safety and lives of our citizens, especially our poorer citizens. I am so disgusted by this!

Chris I
Reply to  maxD

It’s the illusion of safety. When someone dies using this crosswalk after one lane of traffic stops and the other doesn’t, the report will say “driver stayed at the scene and cooperated with investigators; no charges have been filed”.

The piece of information that is missing from this story is about the existing, fully separated, dedicated pedestrian bridge which crosses Columbia in this very location – it is currently in operation/existence to allow folks to cross columbia between banks and midway. A great, green piece of steel bridge 100% separated and dedicated.

One of the issues here is that very few people choose to use this existing ped bridge and instead just run across the road – which can be dangerous due to the poor sight lines and high speeds of traffic and wide road. The question I have, if folks don’t currently want to use the dedicated pedestrian facility which is already here, will they choose to use a new one? I think part of the reason must be the incline that you have to go up to get across – this is extra work, but part must also be walking over to the access point where the bridge crosses columbia. Folks cross columbia here along a several block stretch, so to use the bridge or new crosswalk facility, they have to walk up a block to grab the crossing. Putting in the Red lights will get the cars to stop, but it still involves the act of walking over to the signalized crossing, pushing the button, waiting for the red light. I’m sure many folks will still choose to cross where it’s closest to their origin/destination, which is the situation with the current rarely used pedestrian bridge in this very location.

It kind of makes me wonder about spending priorities – there is already a fully functional multi-million dollar facility for dedicated, safe, ped crossing here (which failed to work for Bradley). It sounds like it will be replaced (or appended) with a new one in the same spot – hopefully it will work better than the current one.

The cut-through issue will be great for people that live on Midway – that road gets lots of cut-through, and this “no left turn” will work to reduce it.

Christopher of Portland
Reply to  Bald One

Pedestrian bridges often take a very long time to cross compared to running across the street. I haven’t used the one on Columbia, but it looks like a long walk on Google street view. I’m tempted during periods of low traffic at 9th and Powell. The distance required to cross that bridge feels like crossing Powell five times.

Chris I
Reply to  Bald One

And if people weren’t so lazy and would just walk or bike instead of driving everywhere, our children could cross the street safely.

cat
Reply to  Bald One

I live in this neighborhood, a hundred feet from Columbia Blvd (the semi-truck traffic shakes my house). The ped bridge also feeds into the fenced George School property and is very rarely used due to that inconvenience. I don’t think this is a single-fix solution. Lots of shenanigans take place on this stretch of road. The light might help, but its overall poor design in cutting off the northside will be impossible to fix.

paikiala
Reply to  Bald One

This road is the over-dimensional route and the bridge limits high loads.
The four lanes are not needed, and changing the outside lanes to curb-protected bike lanes would still permit wide loads to travel down this path.
My question is, why build medians without crosswalks and why build crosswalks not protected by medians?

Protected bike lanes in combination with median islands will severely restrict over-dimensional loads. I think you have to choose one or the other if you want to reserve this as an over-dimensional route.

How will it restrict over-dimensional loads, specifically?
Trucks are not wider than one lane. The loads may be taller, longer or wider than one lane or heavier than typical.
Median and curb protected bike lanes don’t infringe on any of those dimensions. overhangs wider than a lane can travel above 6-inch curb rather easily. Sign posts in the median islands will still be three to five feet from the edge of the travel lane.

If they are banning left turns, than what is the point of the center turn lane? Why not bike lanes?

I’ve almost been in a head on collision in the center turn lane here, turning onto my own street because of the way the road curves and the excessive speed of drivers.

Chris I
Reply to  cat

Probably would be safer with a turn lane, one travel lane in each direction, and buffered bike lanes on both sides.

There should be red light cameras and permanent speed enforcement cameras with every school area project.

Without enforcement there is almost no chance of the traffic calming features of this project actually reducing the dangerous traffic situation at this or other locations.

It is frustrating as *$%% that we are willing to try anything that doesn’t involve enforcement. Our approach is simply not working regardless of whether we call it Vision Zero.

The legislature sets the rules for photo enforcement, not Portland.

Dan A
Reply to  paikiala

paikiala
Reply to  Dan A

Misstating state law to support your position is not responsible. State law permits local jurisdictions to control parking on its own streets.

Dan A
Reply to  paikiala

Deviating from state law to support more parking at the expense of safety is not responsible. Regardless of what the state law permits.

Then the City of Portland needs to exert some special efforts to get the legislature to change the laws. Currently, the City of Portland is choosing not to enforce traffic laws and pedestrians and vulnerable road users are dying at increasing rates. It’s not working. Enacting Vision Zero is not doing it.

Repeat after me – it’s all smoke and mirrors.

This section of Columbia needs speed cameras. I used to live on a street that connected and you could hear the motorcycles and 2fast crowds racing on Columbia every weekend evening and many week nights.

Speeding is not the standard for permanent photo enforcement. The corridor must be in the top tier of crash corridors of the city.

Not to be lost in the discussion is this is the Truck Freight Route from SJ Bridge to I-5 and East. Columbia Blvd also divides the community, those living north of Columbia have a very separate reality than the rest of their community. Of note, the North Portland Willamette Greenway will be getting a bike-ped overpass from Chimney Park to the Prairie, Metros repurposed Superfund site. I do not know if there is any effort to connect the north of Columbia neighborhood to the new overpass, or if it is even possible.