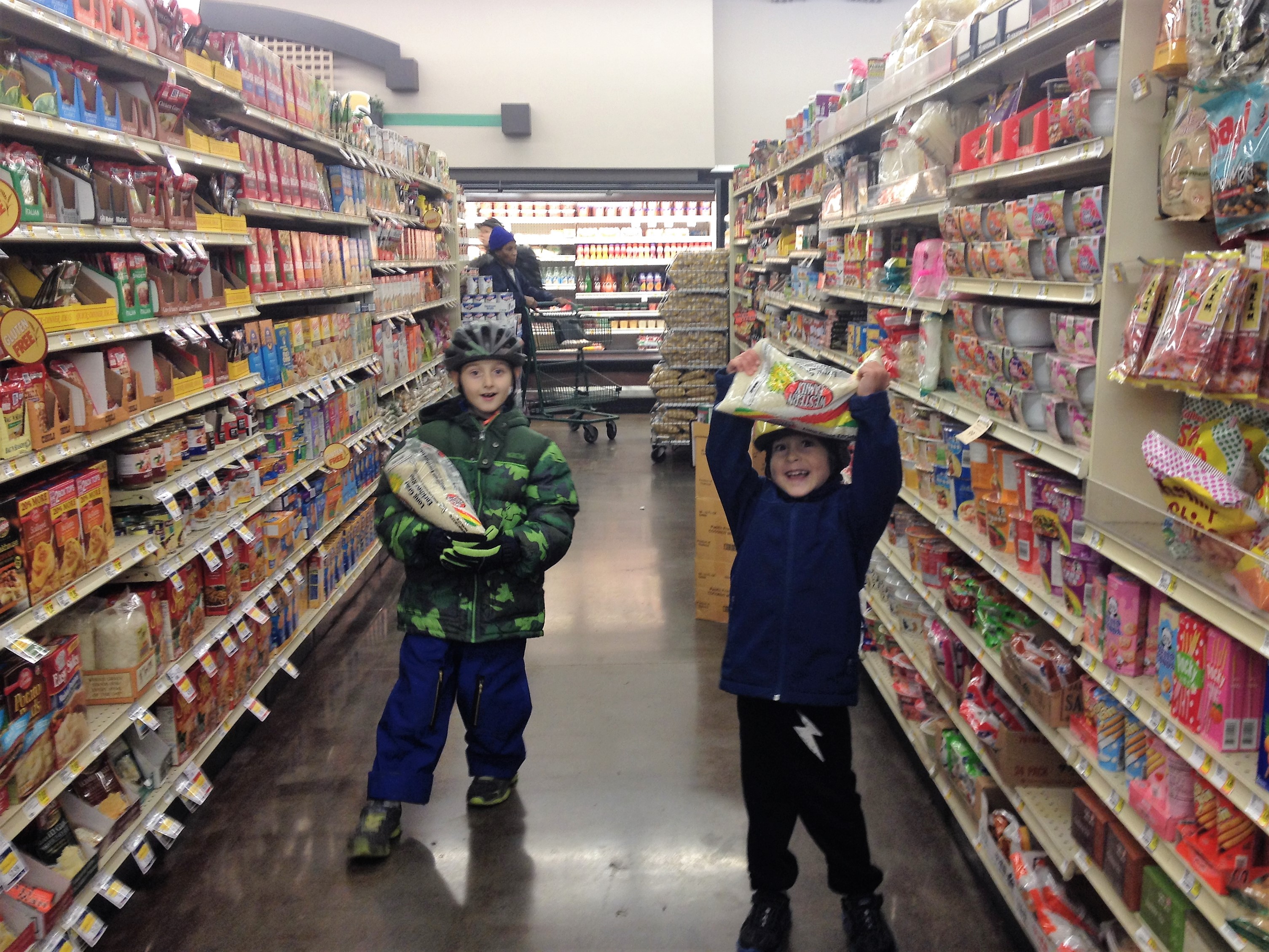 Cranksgiving is a bike-based food-and-supplies drive, treasure hunt, costume contest, and bike race. This is the sixth year for the event in Portland, but it started back in 1999 in New York City. It’s fun for participants fast and slow, and whether you’re equipped to carry a lot or a little, it’s definitely something to bring the kids to.

This year’s edition is on Saturday, November 24th from 12:00-5:00 pm at Nomad Cycles PDX (5820 NE Sandy Blvd). Here’s the blurb from the event page, “Cranksgiving is a tradition. You come, you ride, or volunteer. We provide a manifesto of locations, supplies, and tasks that must be completed. You make it happen with your team.”

This year’s beneficiary is Portland Street Medicine — whose donated bike fleet we featured here on the Front Page two weeks ago.

In addition to purchasing items to donate (expect to spend $20), teams are eligible for prizes in several categories:
➤ Fastest
➤ Most donated
➤ Best costume
➤ DFL (dead…uh…festively last)
Form your team (of any size this year) ahead of time or find teammates on race day. 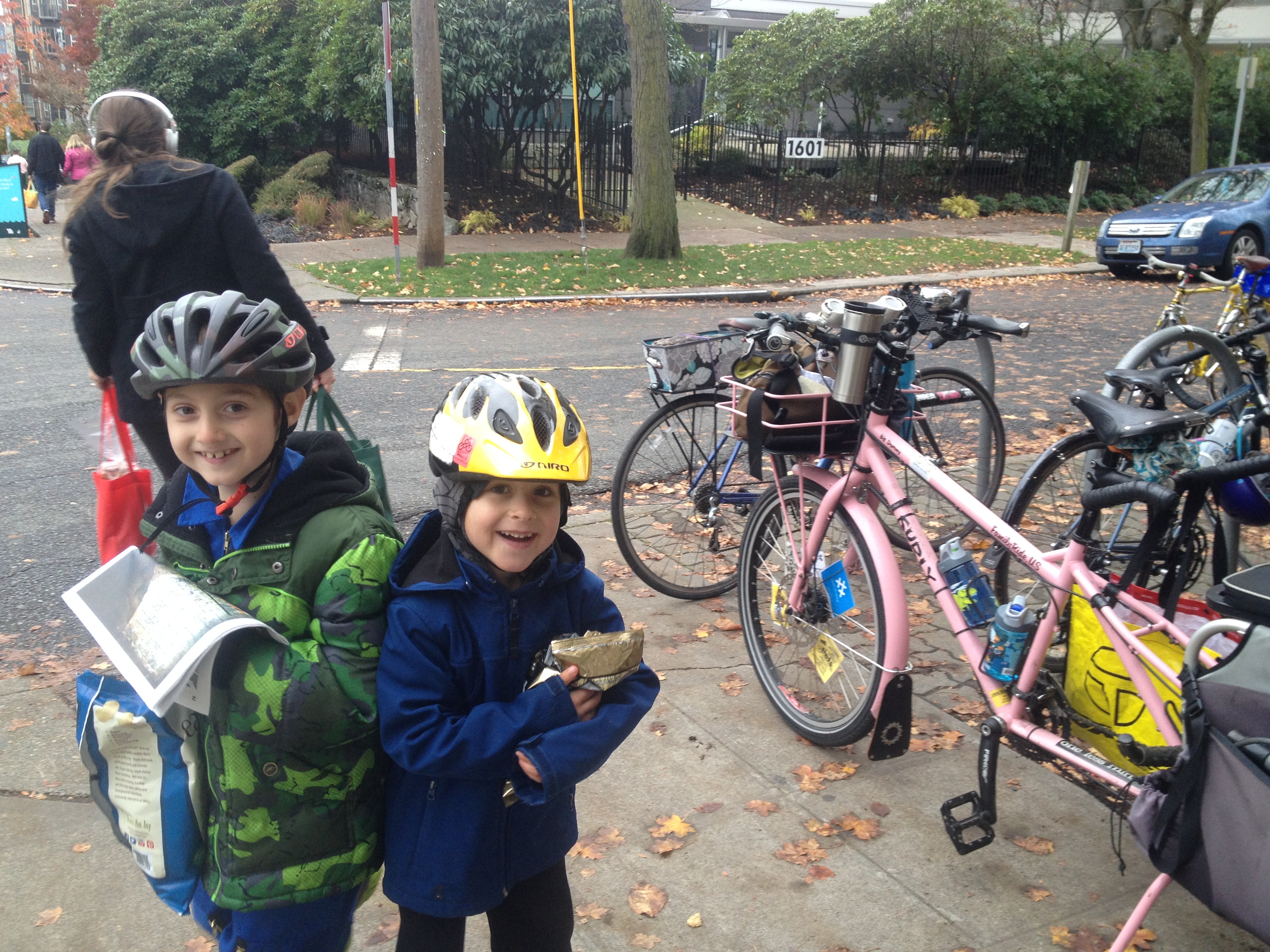 The first five Portland Cranksgivings were hosted by Puddlecycle and reading through the history I was most excited to see a shorter option was added for families in 2015! We’ve participated in four Seattle Cranksgivings and never once made it to the finish line in time, even with abridging things on our own increasingly as the years went by. 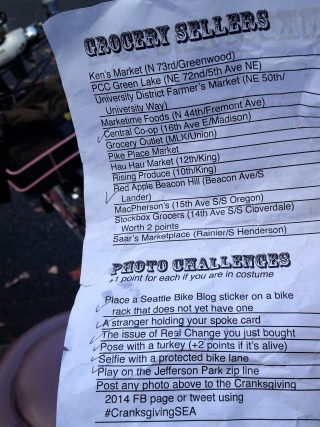 This will be my kids’ first time riding their own bike for a Cranksgiving so we’ll probably take our bikes on the MAX to minimize extra pedaling. Our shortened Seattle events were always over 20 hilly miles (that includes getting back home at the end) so I’m really looking forward to having a different experience this year.

A cool thing about this year’s event is that Cranksgivings typically happen the weekend before Thanksgiving so I’ve already drawn inspiration from other Pacific Northwest events: Seattle had 150 riders bring over 1500 pounds of food to the Rainier Valley Food Bank last weekend and Tacoma had a big turnout for their 4th annual Kidical Mass Cranksgiving for families.

We don’t plan to ride competitively, and probably won’t be able to agree on costumes, but we’re happy to team up with other families, so come out and find us there!

Have you participated in Cranksgiving before? Do you want to share any tips in the comments? Thanks for reading.

I was a volunteer photographer for the first two years, but after watching all the fun I just had to enter as a participant the two years after that. Such a great event!! Three tips:

Spend 3-5 minutes after you get your list actually sitting down with a map. That planning makes things less stressful. Does not apply if you are going for speed title obviously. 🙂

Bring a ziploc bag for receipts! Make one team-member the receiptmaster. Don’t leave them in pockets til the end. I have seen a lot of frantic searching for receipts at the finish.

Actually think about your cargo carry capabilities beforehand. (I am bad at this)

Ooh thanks for all this!

Is it Saturday or the 25th?

Thanks for catching that! It’s on Saturday the 24th and I’ve corrected it in the post.