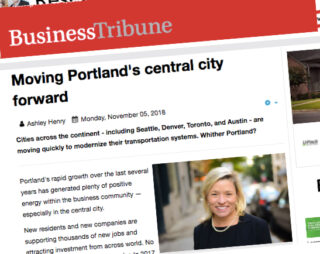 That makes them the first major Portland business group to do so.


In September, the Central Eastside Industrial Council told their members that the most important takeaway from the CCIM plan — a mix 18 projects that aim to upgrade biking, walking and transit conditions — is that the district will lose 250 auto parking spaces.

And late last month, the Portland Business Alliance shared an anachronistic view of the plan that decried what they feel will be a “significant economic impact” if any of the projects reduce auto capacity downtown.

Business for a Better Portland (BBPDX) was created largely as an antidote to the outdated transportation policy routinely promoted by the PBA. Given that the stated focus of BBPDX thus far has been affordable housing and transportation, the Central City in Motion plan can be seen as a test of how far they are willing to go to act as a counterweight to the PBA.

“We know how to move the dial in the other direction and reduce our reliance on single-occupancy vehicles.”
— Ashley Henry, Business for a Better Portland

Based on the opinion shared by Chief Collaboration Officer Ashley Henry in The Portland Tribune yesterday, we can see that the organization is staying true to community expectations.

That being said, Henry’s essay also plays it relatively safe. At times I felt like I was reading something written by the Portland Bureau of Transportation.

Henry ticks the right boxes by outlining Portland’s growth, then saying, “We’ve got to make the streets we have work better.” To do that she says Portland needs transit priority lanes, “more pedestrian pathways to ensure our retail corridors are inviting and safe,” and she says we’ll need, “more protected lanes that make it safer and more comfortable to ride a bike or a scooter.”

Then she says, “The devil is in the details” and recounts conversations with BBPDX members who, “Have varied and strong opinions about the future of our streets.” “Balancing these priorities while accommodating the needs of the full range of people who travel around the central city is difficult,” she continues. “But worth pursuing.”

“I continue to hear calls from community and business leaders for urgent, meaningful action to reduce the region’s impact on climate change. Accounting for about 30 percent of the state’s greenhouse gas emissions, pollution from cars and trucks is on the rise after steadily dropping for more than a decade. We know how to move the dial in the other direction and reduce our reliance on single-occupancy vehicles. Safer infrastructure with a greater range of options will help us meet our climate goals while curtailing the long-term costs that climate change is projected to inflict on businesses.”

I would have liked to see BBPDX offer more specific support for individual projects that are likely to be big political lifts — like the SW 4th and Broadway bikeway couplet — and directly counter some of the PBA’s opinions about the preeminence of single-occupancy vehicles. Instead, it feels as though BBPDX is trying to play it safe with both their own members and the PBA.