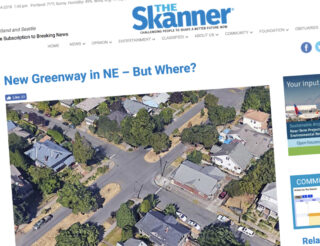 Due to concerns about impacts to local streets — and some residents who say they their voices haven’t been heard — the Portland Bureau of Transportation has extended the comment period for the Lloyd to Woodlawn Neighborhood Greenway project.

“We are planning another phase of public involvement to include more voices, especially the black community members who have been saying they only recently heard about the project,” PBOT spokesman Dylan Rivera said in an interview last week.

Rivera was referring to an August 23rd article in The Skanner newspaper that reported, “While PBOT has held meetings and forums since February, the word on the proposed project has been slow to reach households of color. Local boosters hope more families will participate before it’s too late.”


re: Lloyd to Woodlawn n'hood greenway, seems like some neighborhood oppo might be rooted in race & income concerns. How does @PBOTinfo weigh opinions of diff residents after Williams corridor experiences? https://t.co/hnfK1W6qFi

“We know we need to do more work for outreach generally in the black community and we’re committed to doing that. Across all PBOT programs, not just this one project.”
— Dylan Rivera, PBOT

We first posted about this project in late February. It aims to create a “calm” low-stress street between I-84 in the Lloyd District and Dekum in the Woodlawn Neighborhood. The latest designs show it would be PBOT’s most ambitious greenway project to date. The proposal to dramatically constrain driving on NE 7th (as opposed to routing it on NE 9th) in order to improve access for vulnerable road users along the entire corridor has been met with rousing cheers by a strong majority of survey and open house respondents thus far.

When asked which option was preferred, 83 percent of respondents said they were either “supportive” or “very supportive” of putting the greenway on 7th and implementing diversion to make sure driving volumes would decrease on that street.

But the article in The Skanner, a paper with a stated goal to, “advance the cause of the Black Press,” painted a much different picture. One woman who works on NE 7th expressed concern that spill-over traffic will clog adjacent streets. “Everybody I’ve talked to thinks that is crazy. There is a disconnect here,” she said. Another man who works at Head Start on the corner of Fremont and 7th told The Skanner that the project, “Would make it more difficult for people — frankly, low-income people who are trying to use the services of Head Start.”

Asked to respond to these concerns, PBOT’s Rivera said they’ve worked hard in the past year to reach out to people who will be impacted by the project. “We’ve really tried to do a lot more to really engage the black community in north and northeast by attending events, offering specific open houses in the area… And we’re committed to doing more.”

On June 6th, PBOT co-hosted an event called What’s Happening In Our Streets? It was billed as a, “transportation open house for the black community.”

The situation PBOT finds themselves in today has echoes of the North Williams Traffic Safety Project in 2011. It was just over seven years ago when PBOT and cycling boosters (myself included) were called to task for being insensitive to the history of systemic racism and discrimination against people of color in north and northeast Portland.

Asked how their agency has changed since the Williams project, Rivera pointed out the open house in June as well as attendance at other events like Good in the ‘Hood and Juneteenth. “Overall, we are trying to be more intentional in our outreach to the African-American community,” he said. “These efforts have started and they’ll continue to evolve and change… We’re committed to making sure everyone feels heard whether they first heard about the project in January or July. We know we need to do more work for outreach generally in the black community and we’re committed to doing that. Across all PBOT programs, not just this one project.”

In July, PBOT said a final design for the Lloyd to Woodlawn project would be chosen later this fall and it would be built in spring 2019. Now they aren’t giving any timeframe. “It will take weeks before we know what that next phase [of outreach] even looks like,” Rivera told us last week. “And months to actually conduct those meetings or online open houses or whatever that strategy calls for.”

I contacted Head Start Director Ronnie Herndon for comment but have not heard back.

Thanks for connecting the dots, Jonathan! I know PBOT has been working on internal diversity, equity, and inclusion growth and am interested to see how they’re implementing those efforts across programs. I myself often feel a rush to see active transportation improvements as a unilateral good – I received notice of the initial survey from other bike advocates with encouragement to vote for the NE 7th alignment, so I imagine a number of the other early survey respondents were also folks like me who received it that way. But we must contextualize it against the backdrop of ‘improvements’ in N/NE portland – most of which have resulted in improvements for some, displacement of many others (the construction of I-5, the construction or proposed construction of Legacy, the redevelopment of Williams and Alberta streets, etc.)

I agree with everything that Esther said.

AND I’m still disappointed that the city isn’t figuring this out by now. There isn’t a transportation project that I’m more excited about than this one. I can see tremendous potential should this project get finished.