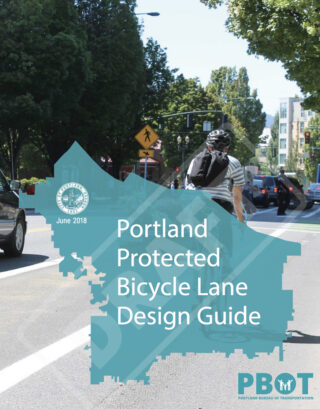 Portland could build 137 miles of protected bike lanes protected from other traffic with a planted buffer zone — and launch a transportation revolution with far-reaching benefits — for just $73 million. Or we could do it for about $34 million using plastic delineator posts. Those are two of many insights gleaned from the 124-page Portland Protected Bicycle Lane Design Guide just released in draft form by the Bureau of Transportation.

When we shared a sneak peek at the guide last month, PBOT Bicycle Coordinator Roger Geller said, “It provides much-needed clarity about what we can build and how it will fit on Portland streets.”

The guide offers engineers, planners, project managers and advocates a road map to retrofit Portland’s streets. From detailed cross-section drawings that can be applied to 28 different street configurations, to clear recommendations on what type of protective materials to use in specific situations, the guide should help hasten the development of protected bike lanes. If you’re an advocate for streets where fewer people die and where everyone — even those who don’t use cars — can get around more efficiently, you’ll appreciate the vibe in the introduction:

“The intent of the designs in this guide is to quickly and emphatically reconfigure Portland’s streets, not just so they operate in a safe manner, but also to communicate that bicycling is more attractive than driving and that bicycle transportation is accessible to people of all ages and abilities…Numerous studies from around the world, as well as our experience and the experience of cities with which we are allied through the National Association of City Transportation Officials (NACTO), have confirmed that providing protected bicycle lanes on busy streets is a key element to addressing the demand for better conditions for bicycle transportation. Such facilities are the highest quality bikeways, and are appropriate on roadways that include higher motor vehicle speeds and volumes.”

For engineers, the guide gives plug-and-play directions on how to redesign Portland streets. It breaks down the six categories of protected bike lanes — from basic ones that use plastic wands, to the City’s preferred design that puts the bike lane at sidewalk level and separates it from cars and drivers with a four-foot wide buffer zone. Engineers can use metrics like current volume of bicycle riders, parking availability, and speed of drivers to quickly determine which protected bike lane design is appropriate for the context.

For project managers and politicians, the guide lays out cost estimates and even calculates the expected decrease in on-street parking supply when various bike lane designs are implemented.

Does your project reconfigure two miles of roadway? Now you know it will cost about $70,000 per mile for low-end protected bike lanes and up to $2.8 million per mile for larger streets where you should separate the bike lane from other lanes with a full concrete median.

Politicians: Are you scared about negative media coverage or do you have an election coming up and have concerns about people who will complain about a “loss” of “their” parking spaces? The guide shows that if Portland implemented 30 percent (137 miles) of the 460 miles of protected bike lanes as called for in our adopted transportation plans we would decrease overall on-street parking supply by 4 percent. If we built 52 percent of the protected bike lanes located in metered districts, there would be an 8 percent decrease. (Note I use “decrease” instead of “loss” when referring to a change in on-street parking availability.) 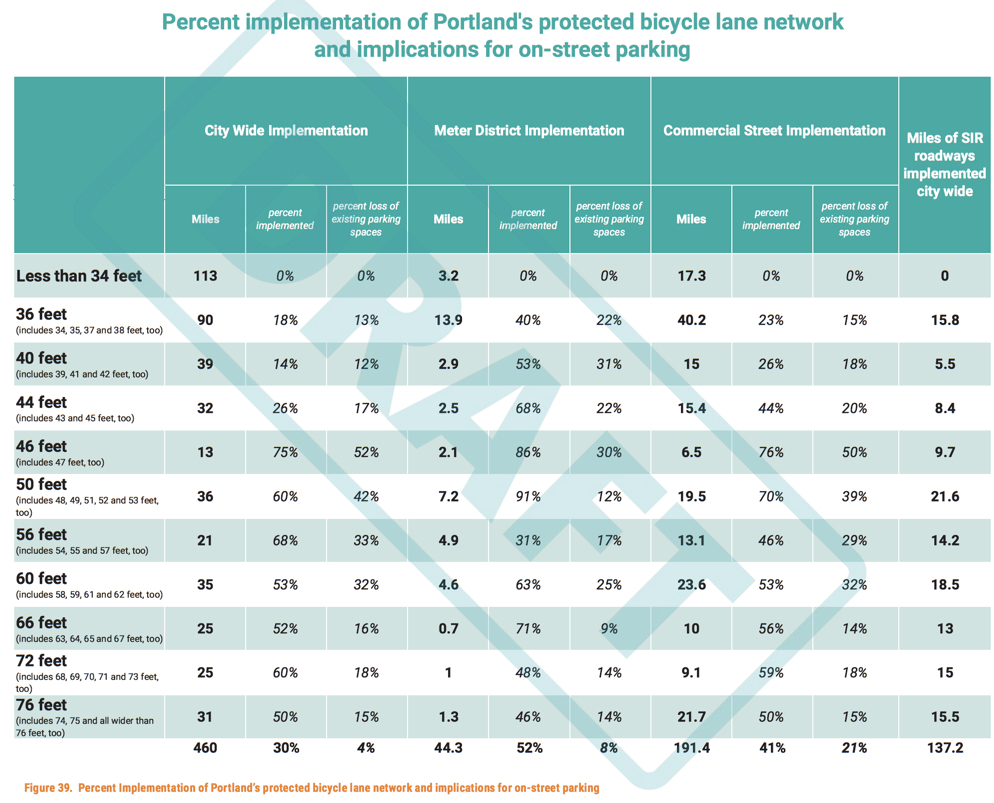 Advocates will be interested to learn that PBOT could implement 137 miles of protected bike lanes using the cheapest design option (using plastic delineator posts or parking for protection) for just $36 million. For context, ODOT will spend $28 million to repave and add lanes to 5.5 miles of I-5 this summer. If we did that same amount using a more deluxe form of separation — a full concrete median — PBOT estimates the cost would be $334 million. 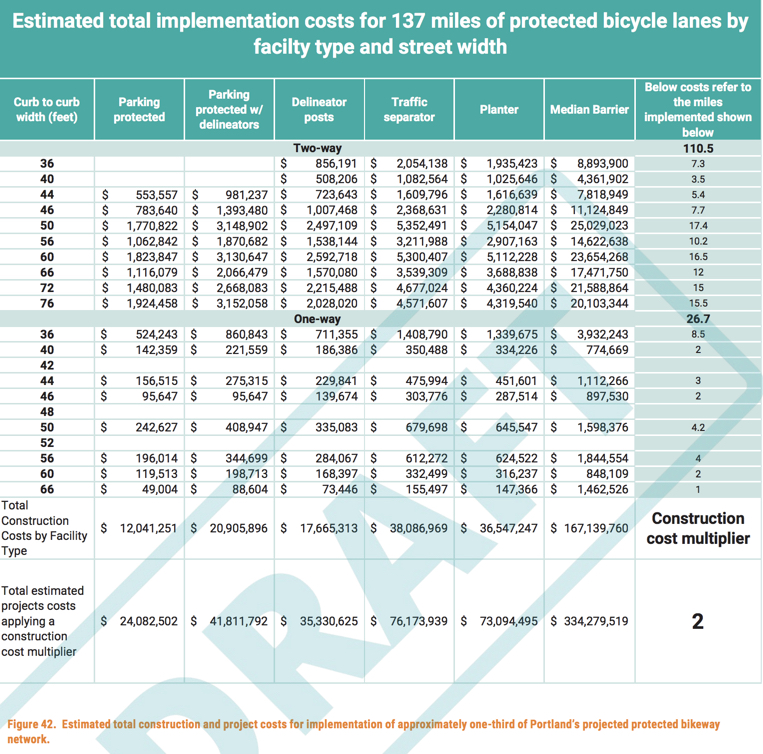 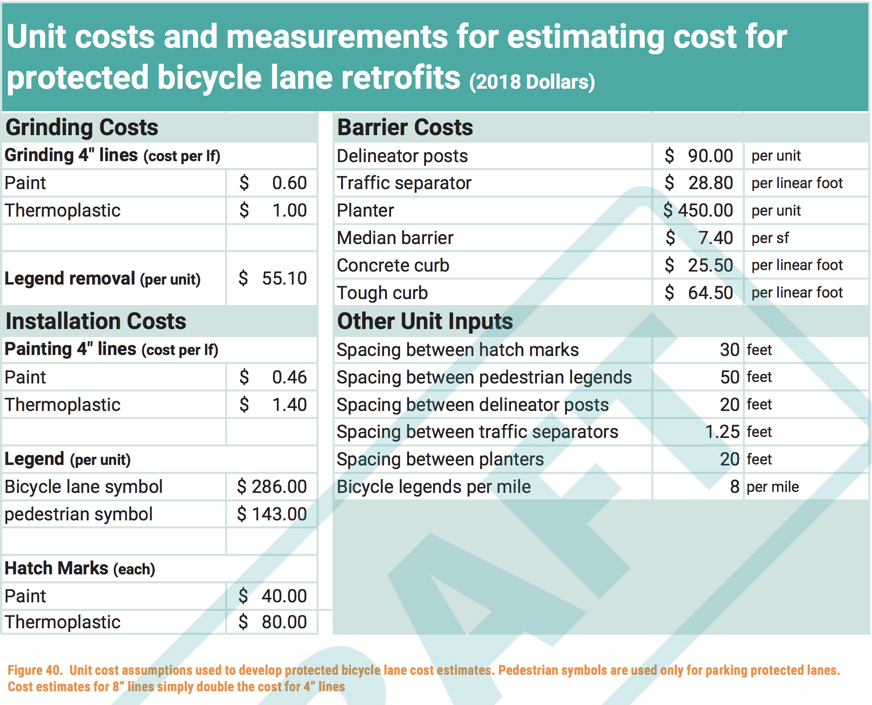 There are even map views of where the new protected bike lanes would go:

PBOT says this draft version of the guide is now out for technical review among agency partners. They’ll also take public comments through the end of July. If you have feedback, please send directly to Roger Geller via email at roger.geller@portlandoregon[dot]gov.

« Golden Pliers, a bike shop and cafe, opens on North Skidmore at Interstate
The tram is closed! How do I go by bike? (Day 1) »