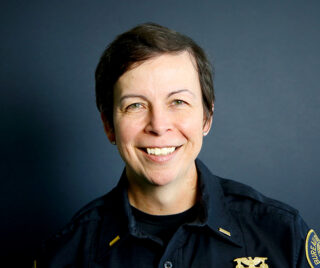 On June 28th, Portland Police Chief Danielle Outlaw will promote Lieutenant Stephanie Lourenco to the rank of captain of the Traffic Division. We follow that position closely here on BikePortland because it’s the Traffic Division captain who has the most influence over street safety and transportation-related issues.

Lourenco will replace Michael Crebs, who is taking a position in parking enforcement with the Portland Bureau of Transportation.

The promotion of Lourenco to Captain is notable for several reasons: Stephanie is the first transgender person in the Bureau’s history to hold that rank, the first non cis-gendered person to lead the division since at least 2005, and just the latest in a long-running trend of short-lived captains at the Traffic Division. Since I started keeping track we’ve had Bill Sinnott, Marty Rowley, Vince Jarmer, Larry O’Dea, Eric Hendricks, Bryan Parman, Todd Wyatt, Eric Schober, and Michael Crebs. This frequent turnover makes it much more difficult to establish the the type of relationships with city staff, advocacy groups, and the community-at-large that we need to fix complex problems.

Lourenco comes to the Traffic Division as a 19-year PPB veteran and has worked as a patrol officer in several precincts throughout the city. Her record includes stints in the Family Services Division/Domestic Violence Reduction Unit and as lieutenant of Central Precinct. A statement from the PPB says Lourenco has numerous commendations letters for her community policing efforts, professionalism and compassion.

Now Lourenco will put those leadership and policing skills to use running a division that’s in charge of vital programs like DUII enforcement, enforcement actions, the Major Crash Team, the Photo Radar/Red Light program, and more.

Welcome to Traffic Division Capt. Lourenco! We look forward to meeting you and working with you on transportation issues.

Welcome to your new endeavor, Officer Laurenco. I hope you’ll find it rewarding. We sure do need the help.

Welcome Aboard, and may a new tide of justice roll in until the traffic scofflaws are swept from our fair land.

Thank you for not taking an autocentric approach to that 🙂

Right. We wouldn’t want to target the vehicles that are causing over 99% of the road deaths out there.

Will there be an open house meet and greet?

The captain’s gender is completely irrelevant. I don’t see why it is even mentioned.

What I want to know is what’s the captain’s support for vulnerable road users and will the captain’s leadership do anything to reduce the apparent bias against bicyclists by some Traffic Division personnel?

I don’t know.
I for one appreciate learning about this aspect. Historically our police forces have tended toward white and male, which isn’t per se a good thing. Whether the also widespread institutional propensities toward violence and bias can be traced to these demographics I don’t know, but I wouldn’t rule it out. To now have a black female head the bureau and a transgender captain communicates to me that perhaps we here can move beyond some of these unfortunate legacies. I’m at least open to those possibilities, though certainly won’t suggest race, sex, & gender are necessary or sufficient to the task. Now we get to find out.

There is of course still a long history of chauvanistic male culture within the police force that probably won’t fade immediately, but a diversified leadership is certainly a start.

Resopmok
“There is of course still a long history of chauvanistic male culture within the police force that probably won’t fade immediately”
of course.

“but a diversified leadership is certainly a start.”
my point.
class=”recommended”>Recommended 0

Of course, the focus should not be on the captain’s gender – but it isn’t.

As an LGBTQ+ person, I appreciate hearing about a career “first” for a trans person, especially in the police department. I’m sorry that reading the half-sentence about it was such an inconvenience to you..

A female or LGBTQ officer can ignore enforcement as well as a white male.

Your statement is not wrong, but it also doesn’t really need to be said.

I exchanged a few emails with the outgoing Michael Crebs regarding ongoing speeding issues that we were (and still are) having in NE Portland.

He told me that on any given day, he only had four officers available for traffic enforcement, and that they were often pulled for other duty, vacations, etc., meaning that he often had less than four officers.

Four officers for the whole city? Until *that* changes, it doesn’t matter who is in charge. Sadly.

All the more need for photo-enforcement. And if they’d jack up the fines, they’d be able to afford more cops.

MQ,
Yours is a common misperception, that citation revenue primarily goes to City coffers. Citation revenue to the city is a fraction of what goes to the County Court system and other funds.
Portland enforces traffic law for safety reasons, not revenue.

And if you don’t understand how important it is to make sure that your police force does *not* become a revenue source for the municipality in which they work… Just review the events in Ferguson MO and the ensuing civil unrest.

It’s bad, bad, bad to get into a situation in which your citizens become a *revenue source*…

S,
The cameras run $35k+ per enforcement direction just to install, and cost v. effectiveness is always a public-sector factor in decision making. The speed cameras are best suited for high volume locations, probably roads above 15,000 vehicles per day. Marine Drive serves about 13,000 where new cameras were recently activated.
I would not wish for a Singapore style police state, and expanding the reach of police powers is a step in that direction. What was it B. Franklin said about giving up freedom for security and achieving neither?

I hope she will consider being innovative in the use of already existing and puchased technology to reduce the subgroup of people driving on suspended or revoked licenses who are megaoffenders with long lists of traffic citations, and/or multiple DUI. This capability exists even with limited resources and only needs to be utilized to a greater extend in order to make the streets safer from the wor st chronic offenders.

“Stephanie is the first transgender person in the Bureau’s history to hold that rank, the first non cis-gendered person to lead the division since at least 2005”

So there was a trans or non-binary lead of the division pre 2005? Or do you think cis=male?

The reason so many officers rotate through this position is because it is a promotional opportunity that helps pad the retirement benefits of PPB’s favored officers nearing retirement age.

Congratulations to CPT Lourenco!! We worked together many years ago for the Coeur d’Alene Police Department. Even then, I was impressed with her intelligences, but more importantly her thoughtful and respectful interactions with the public.