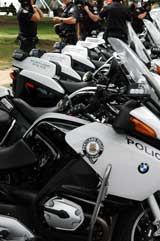 The Portland Police Bureau has named Vince Jarmer as the new Commander of the Traffic Division. The change became effective as of August 9th.

Jarmer was formerly the Lieutenant of the Traffic Division (under former Commander Bill Sinnott) and was most recently Captain of the Personnel Division.

Jarmer takes over the commander position from Mark Kruger, who will return to his role of Lieutenant after serving as Acting Commander since January.

A former head of motorcycle officers at the Traffic Division, Jarmer has been involved with bike issues in the past.

The Traffic Division plays a major role in the bike community. They write the vast majority of bike-related citations and they provide escort at bike parades and other events.

Probably cause for celebration around these parts, but if Kruger returns to his old position of abusing protesters, not that much to celebrate.

I do hope that this can lead to an open dialog and some change.

How about we send a collective \’congratulations\’ card to him?