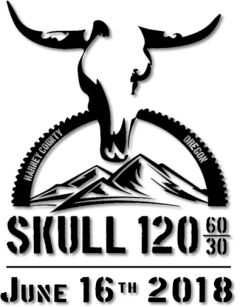 About 130 miles east of Bend lies the small, high desert town of Burns, Oregon. People from the Northern Paiute tribe have lived there for thousands of years. Today, like many eastern Oregon towns, the area gets by mostly on farming now that most of the big timber is gone.

But there’s another natural resource that is just coming into its own: unpaved roads that are perfect for bicycling. And an interesting partnership of local, state and federal agencies are leading the charge to promote them. The marketing vehicle for this new discovered asset is the Skull 120/60/30/Relay ride — a combination endurance/gravel/cross-country/sightseeing race/ride that will roll out on its second annual edition June 16th. 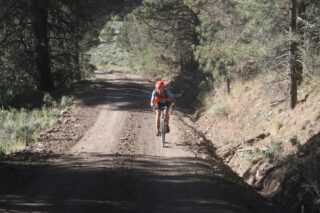 Billed as “America’s gnarliest gravel race,” the route takes advantage of remote dirt roads and goat tracks to lead riders on a memorable adventure in the Malheur National Forest northwest of Burns.

The Skull is the culmination of a collaboration between Harney County Chamber of Commerce, Oregon State Parks and Recreation, the U.S. Forest Service, and the BLM. “The SKULL 120 atmosphere is very casual,” says one of its boosters, Eric Herboth of Ren Cycles, “and the focus is on having fun on our public lands.”

Local racing veteran Seth Patla did the 120 route last year and says the Skull is the toughest gravel ride he’s ever done.

Herboth says beyond the riding, the event is about supporting resource stewardship and land conservation. “As civic-minded outdoor enthusiasts we can be quick to recite lists of what our fellow citizens in remote open spaces shouldn’t do with the land — don’t drill it, don’t mine it, don’t log it, don’t graze it, and so on. We should all know by now that a negative list of don’ts is far less effective in spurring greener avenues for rural economies than a positive list of things we can do.”

Route designer Cameron Sanders with the US Forest Service says the event is part of their effort to, “Increase social equity and economic resiliency through cycling and cycling-based tourism.” Sanders and other promoters of this event are looking to build the Skull into a large event that helps put Harney County’s cycling assets on the map for people from all over Oregon and beyond.

It’s just a five-hour drive from Portland and there are plenty of places to camp and stay overnight. Register and learn more about the event at AdventureHarney.com.

CORRECTION: This article was edited to reflect the fact that members of the Northern Paiute tribe weren’t just the first people to live in this area — they still live there! Thank you to commenter Vanessa for pointing out my mistake.

just a five hour drive? haha! what a lame way to end an article… can you start stating these things in terms of how long it would take to bike there? if the readers of BikePortland want to get in a car they can map it themselves…

btw, it says to use Hwy 26 whether you’re driving or biking…

How do you get your name to change colors. That’s neat.

Unless you plan on exploratory charting your own route through the forest there aren’t really many options for getting to Central and Eastern Oregon without using major Hwy’s. Going through the Gorge then south would add over 100 miles… kind of a strange critique of this ride/post. Far majority of participants will drive but many of them likely are the type that would also do long bike touring trips using the hwy’s you seem to be saying are ill suited for cycling.

I will admit the long drive is only thing holding me back from being an absolute “yes”. Getting 5 hours East for a 6am Saturday start is tough.

Middle of the Road Guy
Reply to  Spiffy

You must really hate CycleOregon then. Gotta drive to those starts also.

sorry you didn’t like the ending Spiffy. That’s just how it came out. I assume no one would be interested in biking to this event or I would have put it in biking terms — which is something I have done many times in the past.

Thanks for being a subscriber! I appreciate your support.

I’ll be flying in from Alaska and then gravel bike touring out for the race. It will be a marvelous way to spend June 🙂

Hi Cameron. I’m very close to registering. This is my kind of challenge and I love being in eastern Oregon. Might see you out there.

Cameron didn’t design the route I did! see you on the 16th? I will be doing the skull 60 on my mtn bike since I am a mtn bike racer not much into Gravel grinders.

I pedaled thru the area about a decade ago (Izze to Burns) and remember it as off the charts awesome, some of the best bike touring I have been on. Rimrock, forest, wildlife, so remote. I think that loop would make a great bike camping adventure.

I did too, in 2001 as part of Cycle Oregon. Beautiful country. Also did a tour of the North Fork Malheur trail and the Strawberries northeast of Burns, as one of my last official acts as a Northwesterner. Beautiful, quiet and underrated country out there.

Cameron wasn’t the route designer I was. Anyway it’s a great route I am sure everyone who ride either the Skull 120/60/30. See all who signed up on the 16th

You write “For thousands of years people of the Northern Paiute tribe lived there.”
The Burns Paiute tribe still lives there. https://www.burnspaiute-nsn.gov/

ugh. of course. that’s a mistake I won’t make again. Thank you Vanessa. (and just found out I’ll be meeting some of them at a pre-race dinner on Friday night).