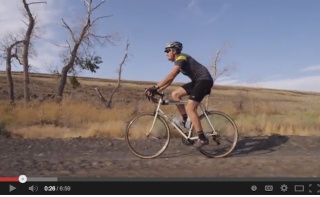 Riding the gravel roads of eastern Oregon.
(Still from video – Watch it below)

Remember last August when I had the very good fortune to sample the Treo Bike Ranch in eastern Oregon? I didn’t mention it at the time, but during that trip we were joined for one of the days by a professional film crew that was shooting for Travel Oregon.

It turns out our riding at Treo was just one of several pieces of an impressive new video just released by the statewide tourism agency. Communities Powered by Travel: Bicycle Tourism highlights several bike tourism success stories. It features business owners and community advocates that graduated from Travel Oregon’s Rural Tourism Studio training program which the agency says, “is designed to assist rural communities in sustainable tourism development.”
The three success stories in the video are Treo Bike Tours, the Old West Scenic Bikeway, and First City Cycles (based in Oregon City). Watch it below…


The video is the work of Maser Films, one of the top outdoor filmmakers in the country whose work includes projects for National Geographic and Oregon Public Broadcasting.

In the video you’ll see several clips of us riding the gravel roads near Phil Carlson’s ranch in Hardman as well as some breathtaking footage of some of the best riding our state has to offer. Mixed into the riding scenes are interviews from bike advocates and the business owners who have invested to make their destinations attractive to bicycle travelers.

That comment I made last week on your meeting with the mayor of The Dalles was only mostly kidding.

Over the last 9 years we’ve watched your voice, message and influence grow. What might have started as an effort to do something you like as work has metamorphosed in to Oregon’s bicycle news/social/advocacy nexus. If you don’t have designs on some sort of political posting the political process might have a position for you.

Those are some kind words and it’s great that you think this site has that much influence! I think some people are destined for elected office and public service and I don’t think I’m one of them. At least that’s how I feel at this moment. I know what it’s like to give everything for a job (that’s how I built this site) and I know that’s what elected office would mean. I did that already and I regret how it pulled me from my family and put things so out of balance.

I’ve also had some experience being close to politics that I didn’t really care for, so there’s that.

right now I’m only focused on 3 things: family, bikeportland, and riding my bike!

Agree on politics; it’s one of those things we keep around because the alternative is warfare. Naturally all the same dirty tricks apply but there is no Geneva Conventions for political wranglings.

PS: I prefer to think of you as great at your job rather than being the Forrest Gump of Bicycle Journalism.

What a great video! It’s so great that the state gets it when it comes to bicycles and those of us who ride them.