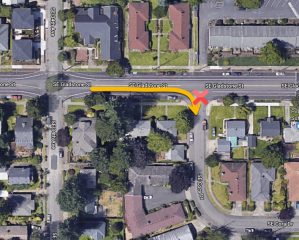 A man has been arrested and charged with four crimes in relation to a crash on April 6th that injured a bicycle rider.

The Portland Police Bureau just announced they’ve arrested 30-year-old Abduraham S. Abubaker at his home (near SE Ramona and 122nd) for his role in a crash that took place on SE Gladstone at Cora just east of 34th last week. This section of Gladstone has two general vehicle lanes, unprotected bike lanes and a curbside lane.

Police say witnesses who saw the crash said a man driving a blue Dodge Stratus turned south onto Cora from eastbound Gladstone “and collided with the bicyclist.” The driver then fled and left the injured bike rider in the roadway. The victim was helped by people who had gathered nearby. They contacted help, remained at the scene, and gave information to officers.

Today Abubaker was lodged at the Multnomah County Jail on charges of Assault in the Third Degree, Reckless Endangering Another Person, Reckless Driving, and Driving Under the Influence of Intoxicants.

Anyone with information about Abubaker or this crash should contact Traffic Investigation Unit Officer Garrett Dow at 503-823-5070 or Garrett.Dow@portlandoregon.gov

Traffic, and vehicle speeds, are picking up on Gladstone. My guess is that people are using it as a shortcut if Powell or Holgate are backed up. The existing traffic-calming devices – speed bumps and traffic islands – don’t work. Most speeders approach the traffic islands like a mini Le Mans course.

Whoa, barely two blocks from my house on SE 35th.

I second Mike’s comments above about traffic increases in past couple years. The bumps and islands help a good amount in my opinion, and I find that most drivers are conscious of the fact they are on more of neighborhood street. That said, to make i abundantly clear I take the lane whenever possible at those islands, as it is not a worthy place to pass (not to mention the fact that a car would need exceed the speed limit to do so, going westward/downhill).

If I had to pin down the biggest Gladstone troublespot though, I would definitely say it is the morning commuters that hop of Holgate on SE 24th or 25th, and then aggressively merge onto Gladstone a few blocks up.

i came up on the rider shortly after the collision. helped him get up and waited till the cops came. luckily there were other people there that saw the collision and got the drivers license number and description. i have only been riding gladstone daily for about 3 months and have noticed there are some very reckless drivers on that road. had one guy pass a car in front of him by going around the right side in the bike lane at about 30. it seems drivers are getting more impatient as traffic gets worse and are become more careless and reckless. as Portland gets more crowded i dont see this getting better, unless more people start riding bikes.