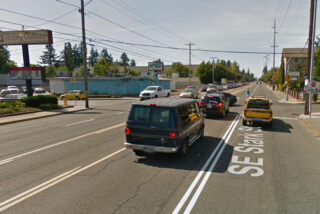 Shaina Hobbs, a policy director for City Commissioner Dan Saltzman confirmed with us this morning that an emergency ordinance (view it below) will be proposed at City Council on April 11th. The ordinance would lower the speed limit on Southeast Stark from 35 mph to 30 mph for a period of 120 days. “Commissioner Saltzman has pushed for this ordinance to come to Council on an accelerated timeline,” Hobbs shared via email this morning.

The ordinance stipulates that the new speed limit would apply to the section of Stark from SE 109th to 162nd and would be effective as soon as new signs are installed.

Similar to the approach the Bureau of Transportation (PBOT) took on SE Division, the ordinance refers to Oregon Revised Statute (ORS) 810.180 (9) which states: “a road authority may establish an emergency speed on any highway under the jurisdiction of the road authority that is different from the existing speed on the highway.” The ORS defines an “emergency” as a, “human created or natural event or circumstance that causes or threatens widespread loss of life, property, injury to person or property, human suffering or financial loss, related to, among other things, transportation emergencies.” As added justification for the move, the ordinance refers to the Comprehensive Plan and the Vision Zero Action Plan — both of which make the safety of vulnerable people using our streets a top priority.

[A copy of the ordinance]
ordinance-Stark-emergency-speed

Pressure on the PBOT and city commissioners to do something to stem the tide of traffic violence on SE Stark near 148th has been building rapidly since 53-year-old Yelena Loukas was killed by a driver on February 1st. Loukas was the third person to die while walking on that section of Stark in less than a year.

“Unsafe streets are a political issue not an inevitable part of our lives.”
— Jenny Glass, Rosewood Initiative

In a statement following Loukas’ death, Jenny Glass of the community development group Rosewood Initiative said, “East Portland streets were designed to move large quantities of cars quickly. The problem is, these roads are not highways, they are our neighborhood streets.” Rosewood Initiative joined hands with Oregon Walks to make several demands on the City of Portland aimed at making Stark safer.

If City Council passes this emergency speed reduction, all three of their demands will have been met.

Last week we reported that Mayor Ted Wheeler’s ‘Build Portland’ initiative — that will issue bonds for infrastructure projects based on future proceeds from expiring Urban Renewal Areas — approved $10 million for safety upgrades on outer Stark. The project will focus investment between SE 117th and 162nd and will include paving, signal upgrades, safer crossings and “corridor safety” improvements.

The Rosewood Initiative updated its members and supporters about their work on Stark in an email yesterday. “The Rosewood Initiative and Oregon Walks have been working feverishly to bring public awareness to the issue,” they wrote, “as well as the needed changes to make our streets safe for everyone.” The email urged people to sign and share their Make Outer Stark Safe for Everyone petition (which has 600 signatures so far) and reminded people that, “Unsafe streets are a political issue not an inevitable part of our lives.”

Advocates say they’re grateful for the attention from City Hall and are currently arranging a meeting with PBOT to look at how to make sure coming changes reflect the community’s needs.

Enforcement? Naaa… No money. No interest.

Speed cameras slow down everyone, myself included. More of them, spaced along major arterials would have a dramatic calming effect. City Council candidate Andrea Valderrama stated her intent last night to do just this. We need safer speeds now, for all citizens.

According to PBOT staff, the experimental speed camera on SE Division has proven to be largely ineffective. Apparently people slow down briefly and then accelerate.

Instead of spot solutions (that are severely limited by state law) we should be pushing aggressively for meaningful systematic speed limit reductions on our deadly arterials.

There is money. There’s a recruiting gap at the Police Department. They literally cannot hire traffic cops.

Yes. No mention of money for enforcement of any kind. Grandstanding.

Lame Duck Politicians are Awesome! They actually do what needs to be done!

Have to say I’m all for this. Even driving down Division seems more pleasant since they put in the speed cameras, so yes, please do the same for Stark!

Kudos to Rosewood Initiative for their advocacy to pull this off.

Glad to see them take some action! I would love to see them install and emergency road diet, just until they can figure things out. I would also like them to consider a City-wide maximum speed limit that would trigger design changes/speed camera/enforcement if it was exceeded by the 85%. Every project coming out of PBOT should be a vision zero project, and a key part of that is reducing speeds. I am thinking of the upcoming Greeley project- instead of narrowing lanes to slow traffic (the 85% is over 55!) PBOT is actually going to widen 2 of the lanes to 12′ and 13′. This puts everyone on that street, regardless of mode, at greater risk! Speed kills.

The emergency speed limit reduction is a nice trick. There’s another trick that can be used. PBoT can do some work on the road, it doesn’t really matter what they do. During the road work, PBoT can conduct a road speed survey, the results of which can be used to reduce the speed limit.

Now isn’t it sad that we have to figure out how to game the system of death that ODOT has put in place? Our agencies should be community partners to make our lives better, not inhuman entities that are literally killing us.

ODOT does speed studies for streets like outer Stark, and won’t do counts during construction.

Jonathan, this is off topic…maybe putting nude photos at the top of the page isn’t the most tasteful. It’s seems to be a random image generator or something? I just bring this up because many of us read this site at our jobs and it’s rather awkward having to explain the nudity (even though the context makes it pretty clear what it is).

I’m getting tired of our elected officials’ eagerness to declare an “emergency” whenever they don’t feel like using the legislative tools at their disposal. What’s the tally now, three? Four “crises” invented by our commissioners so that they can just throw ideas at the wall and see which ones, if any, stick? Is it any wonder that we haven’t seen much progress? Study the problem, develop real solutions, arrive at consensus, then execute. Why do we keep rewarding dysfunction?

Get this: our city government can actually get together and VOTE ON POLICY. That is, when it’s convenient.