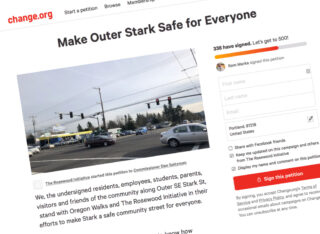 After a woman was killed while walking on Stark around 148th last month, a coalition of community groups and residents being led by Oregon Walks and The Rosewood Initiative have started an online petition they hope will result in help from Commissioner Dan Saltzman. Saltzman oversees the transportation bureau and has shown a willingness to act quickly in the face of tragedy. Last year when a similar spate of tragedies befell another outer east Portland arterial, Saltzman attended a meeting where his PBOT staff presented a plan to tame traffic on Division. “We’re sorry,” the commissioner said, “and we’re bound and determined to do something about that.”

As we reported last month, outer SE Stark has become a repeat location of traffic violence. Three people have died in traffic crashes at or near that same intersection in less than a year and a total of five people have died on Stark between SE 122nd and 162nd since November 2016. Kem Marks with the Rosewood Initiative told us today that, “I just hope people come to realize that Stark is becoming what Division has been, and some of the fixes to Division have moved the problem north.”


Here’s the text of the petition:

We, the undersigned residents, employees, students, parents, visitors and friends of the community along Outer SE Stark St, stand with Oregon Walks and The Rosewood Initiative in their efforts to make Stark a safe community street for everyone.

We don’t need to see stories in the media to know how dangerous Outer Stark St is. We see it every day as cars and trucks speed and drive recklessly through our community. We experience it when we feel the loss of a community member who is no longer with us because of fatal traffic crashes.

— Work with Oregon Walks, The Rosewood Initiative, and other community organizations to develop a comprehensive safety corridor along Outer Stark St

— Include community organizations and members at the beginning of the planning process.

— City Council must fully fund the safety corridor as designed and agreed upon by PBOT, AND community organizations/members.

In addition to signing the Make Stark St Safe for Everyone petition, go to the City Council Web Page for contact information for all five Council Members or call General Information: 503-823-4000 and ask to be connected to Mayor Wheeler and each Commissioner’s office.

In the past week 384 people have signed on. They hope to get 500. Here’s the link to the petition.

Leaders from Rosewood Initiative and Oregon Walks met with Commissioner Saltzman recently. We’ll share updates from that meeting and a response from Saltzman when we hear back.

UPDATE, 3:06 pm: Commissioner Saltzman’s Policy Director Shaina Hobbs told us via phone today that Saltzman “expressed interest” in lowering the speed to 30 mph and he has asked PBOT staff to explore options for doing it either through an emergency ordinance (like on Division) or a request to the Oregon Department of Transportation. “We’re hoping to hear back within the next week or so what our next steps are,” she said. In addition, Saltzman’s office is asking the Portland Police Bureau to use their photo radar van on outer Stark. The biggest news from Hobbs is that PBOT has confirmed they will use Fixing our Streets funding to install a “hybrid pedestrian beacon” at SE 146th and Stark.

Wow, where is everyone?

Outer Stark desperately needs PBOT action to save lives. If you agree, sign the petition.

If fixing Division is simply pushing traffic issues to Stark, then won’t fixing Stark shift deaths to Glisan, Burnside, the 4M, Halsey, etc? It sounds like PBOT is failing to properly plan ahead, and is instead fixing-as-they-go, based upon who dies. A waste of lives and money.

The short answer is, yes, all of the streets need to be fixed. Stark and Division are the worst at the moment, but Glisan isn’t far behind. Burnside is significantly better because it is divided by a MAX line. Personally, I think we should have a MAX line down Division east of I-205. That would drive a complete re-build of the excessively wide street.

Streetcar would be amazing.

Unless the city can get control of these escalating costs, it’s going to be hard to get many new streetcar lines. What might it cost to build new streetcar lines from MLK/Grand out east on Division or Powell or another street, all the way into the 160s and 200s? That’s several miles. $200MM?

Streetcar lines attract lots of private investment. So you’d want to plan the new line as a whole redevelopment package, it seems.

There’s a major fresh-water aqueduct under the center of most of outer Division (along with outer Powell and Caruthers), and the city has ruled out Streetcar and LRT entirely for that street, as well as outer Powell for the same reason, but are willing to consider rail-guided BRT. PBOT lists Division as “poor” or “very poor” (basically failing) in roadway condition and it needs to be entirely rebuilt, so they were hoping a $150 million BRT project plus new sewers and water lines could be used to pay for an eventual street rebuild.

YES! A southern end MAX line along Division would do a lot to reduce auto fatalities. This would be long term, regional planning on a 10-30 year timeline, but this is the kind of pipedreams we need to be examining today for the next generations.

The very idea I should sign a petition for something so self-evident is not only insulting but proves the case implicitly that those in charge are complicit in a sort of negligent malfeasance.

Welcome to the City of Portland, my friend!

I see great merit in lowering the speed of traffic on SE Stark, but I am skeptical that merely lowering the speed limit from 35 to 30 mph will achieve that goal. Neither the Portland Police Bureau nor Oregon State Police seem to have the resources or motivation to enforce the speed limits that are currently posted, do we think that they’ll enforce an even lower limit? We need to be cognizant of the fact that traffic stops are very dangerous for law enforcement officers, and they don’t really like doing them, also there is a limit to how many of the speeding and reckless drivers police can cite (assuming that they assign officers to patrol that section at all).

My preference would be to take a comprehensive approach, not only lowering the speed limit, but adding traffic slowing measures like roundabouts, signals etc. at sufficiently frequent intervals that traffic physically has to move more slowly. I would also advocate adding a speed-red light camera to all traffic signals.

Vote Up0Vote Down
« “Everybody in the industry thought I was mad”: An interview with Islabikes founder Isla Rowntree
The Monday Roundup: Transit’s tech gap, changing speeds, virtual racing, and more »