Partying on the Worst Day of the Year Ride 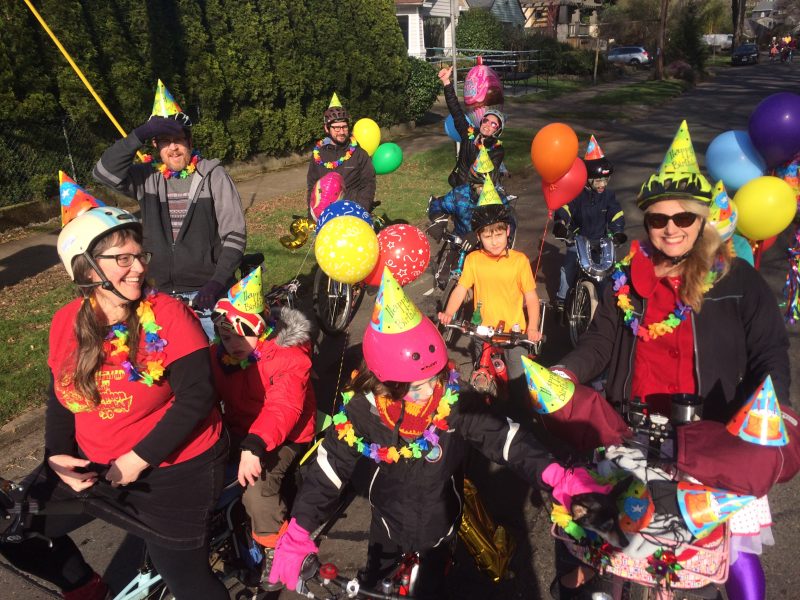 Our group had a birthday party theme. Can you tell?
(Photos: Madi Carlson)

We had a blast on our first Worst Day of the Year Ride.

New this year was a half-price four-mile family-friendly route which was perfect for us. Friends came down from Seattle because their almost-eight-year old wanted to celebrate his birthday with a bikey Portland weekend which made choosing our group costume easy: biking birthday party. I don’t think I’ve ever been on a ride with so many creative costumes and seeing the group finery was reason enough to attend.

So much about the ride surprised and impressed me. First up, I didn’t expect to find a whole street party at the start/finish. Having several blocks of closed roads made for lots of space to get our party of 11 organized and allow the kids to safely find their way to the breakfast bar while I entered the costume contest, one friend registered, and another friend picked up our packets.

The volunteers were numerous and terrific as well. Our four-mile ride had enough pedaling volunteers to stick with each group and help us through intersections and stick to the route. I had expected a self-guided ride. And the route was well-marked in case there were any riders without guides. 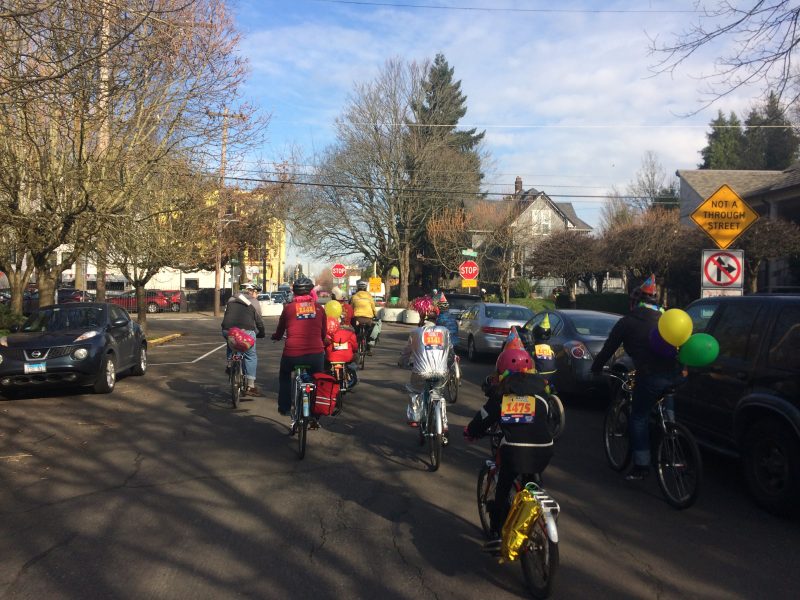 Riding in a big group makes streets feel much safer. 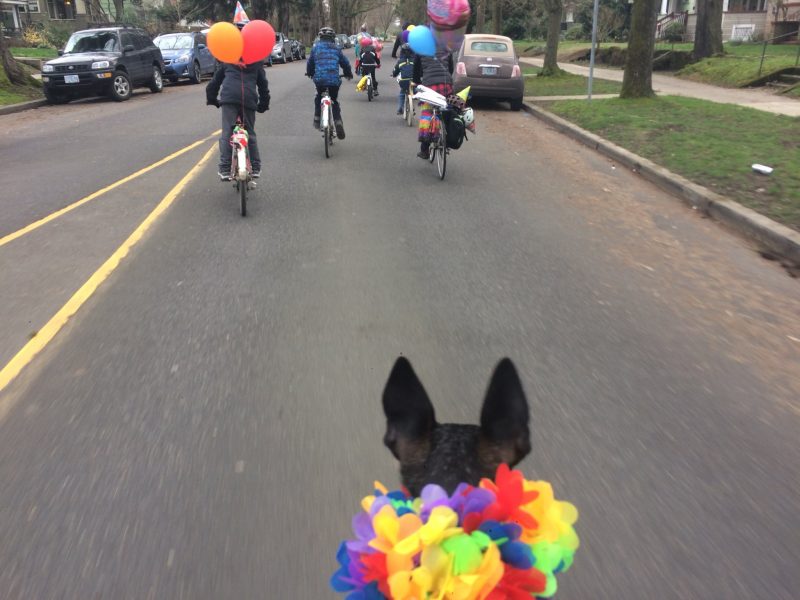 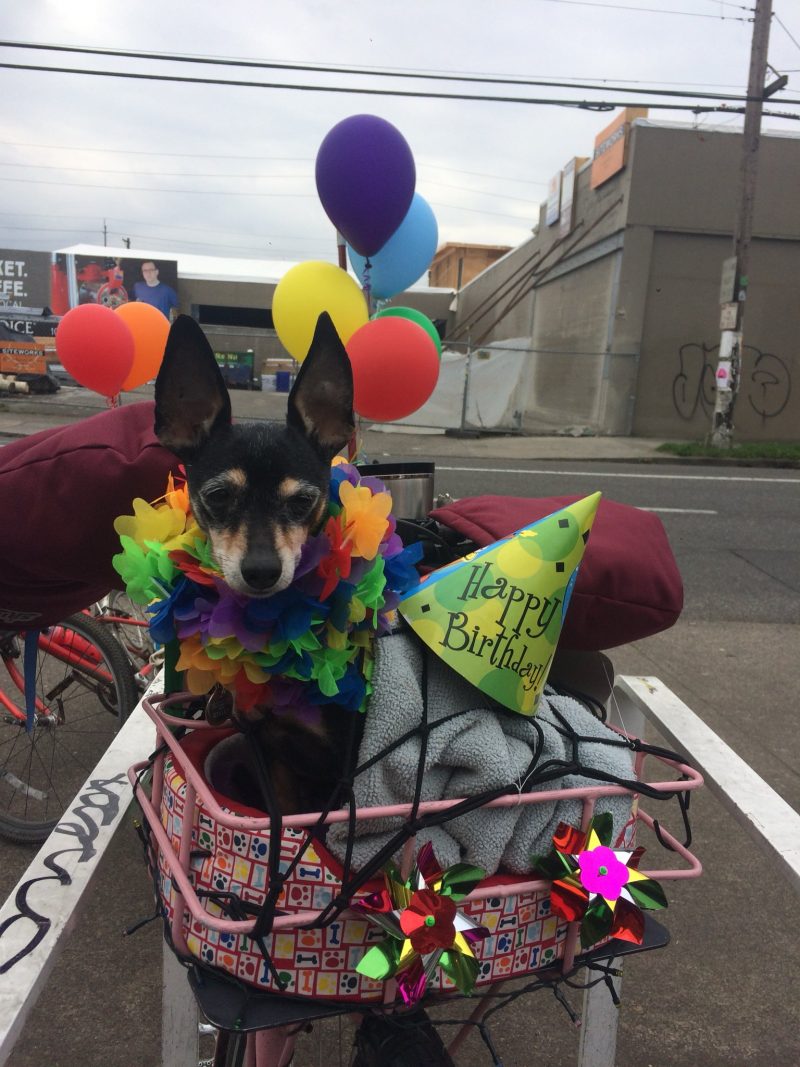 Pixie loves it in my front basket.

The website promised cool rest stops for the 42-mile challenge route only, but we had a rest stop too! And I can’t see how ours wasn’t the coolest: it had a cookie sundae station, slime making booth, sidewalk chalk, and a Clever Cycles bike repair station.

Lunch was advertised as “hot soups and rolls,” but we also got grilled cheese sandwiches! Talk about under promising and over delivering. We also enjoyed the hot chocolate station and another cookie sundae bar, this one with rainbow and chocolate sprinkles.

Lunch was eaten at outdoor stand-up tables in the sun or seated in a tent. It was quite nice out in the sun so we destroyed our pinata al fresco, but lit candles and ate cake in the tent.

Thanks to Community Cycling Center and the rest of the Worst Day of the Year Ride sponsors for giving our buddy “the best birthday party ever!”

Were you there? What was your favorite costume of the day? We liked Captain Underpants best.

Had to work but even watching the intrepid souls coming up Kinston Road in Washington Park made me very jealous. Too bad the weather didn’t cooperate.:)

Aww, Pixie. What a cutie!

The dog dressed like the ewok was cuter, but thanks 🙂

I enjoyed the ride. I saw Chewbacca. Years ago, they would let everyone go at once instead of staggering groups of 25 riders with a 30 second gap. I miss that old format but can understand the change.

Ah, it’s nice for me to hear how the earlier, bigger rides work. I wish we’d arrived a little earlier to see the previous group off (and had time to check out breakfast!)

The ride was canceled a few years back due to the worst weather day of the year…it was the right call from an organizer standpoint…they took heat for it though.
Still makes me smile when I hear about this ride. It would have been interesting to see how many people would have showed up and if they would have completed the ride.

😉 And again! the weather was HORRIBLE!! 😉

Great write up, it makes me want to sign up next year. Nothing like under promise and under delivering. And of course captain Pixie is the cutest!

Ooh, I will ping you joining us and for costume ideas next year!

Thanks for the nice write-up and for the shout-out! The Community Cycling Center was delighted to re-join the event as a partner/beneficiary, and I was personally delighted to be there at the start line enjoying the crowds and the party. My favorite OTHER costumes included: TWO different complete “Wizard of Oz” ensembles, several Sasquatch, Captain Underpants, one Incredible Hulk, and Max and a Wild Thing.

Ooh, working the start line seems like a smart way to see everything! The gorilla and banana taking turns chasing one another were pretty funny, too.