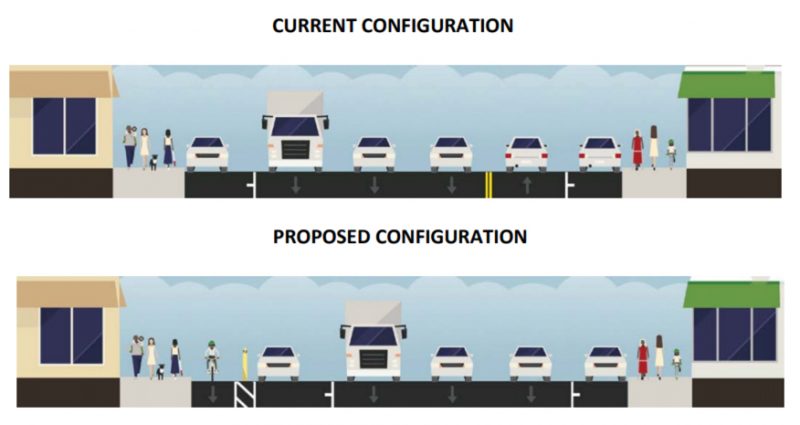 Changes coming to Southeast Morrison will create a new protected bikeway, bus-only lane, safer crossings and better access for freight vehicles between Grand and 12th. Belmont will also get a new bikeway to fill the existing gap between Grand and 7th.


In a PBOT report, only one of the 18 businesses was opposed to the idea and 143 of the 153 people who took the online survey supported the changes.

Back in June we reported that PBOT had proposed this project after years of feedback from users who had safety and operational concerns. Morrison is currently a two-way street with no bike lane a little-used eastbound lane that ends at 11th Avenue. Its eastbound couplet, Belmont, only has a bike lane east of 7th. The project will add a protected bike lane on Morrison and will connect Grand to 7th on Belmont with an unprotected bike lane. The new bikeway on Morrison will feed into the existing bikeway between Grand and Martin Luther King Jr. Blvd that provides access to the Morrison Bridge and Water Avenue.

The change comes after public feedback via a PBOT survey was overwhelmingly supportive of the idea. 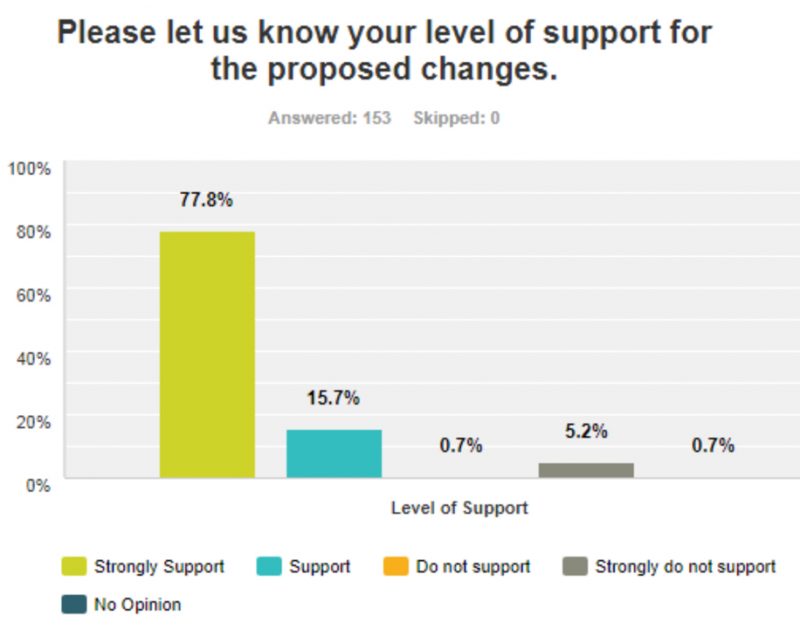 Acting on orders from the Central Eastside Industrial Council’s Transportation and Parking Advisory Committee in May, PBOT conducted and only survey, door-to-door outreach for businesses on the corridor, and did a direct mailing to over 1,200 adjacent residents. In a PBOT report, only one of the 18 businesses was opposed to the idea and 143 of the 153 people who took the online survey supported the changes. 98 people offered additional comments via the survey and/or emails directly to PBOT. The words (besides “street”) that appeared most frequently in those comments were “bus lane” and “protected bike lane.”

Here’s an aerial view of the current striping plan. Notice that the bus-only lane will still have “pro-time” parking which means it’ll be available for parking only during off-peak hours.

From here PBOT will continue to analyze feedback and refine the final design. They expect to complete the project this fall. You can see an overhead diagram of current striping plans and learn more about the project at PBOT’s website.

I wrote the project manager at gabriel.graff@portlandoregon.gov to suggest that the pro-time parking not start until 10AM. Unlike the similar pro-time parking on SE Hawthorne east of Grand, which starts at 9AM. Often people park there starting around 8:45 – and, the fact is that Portland’s rush hour lasts past 9AM now. Bus passengers who might already be running late to work shouldn’t be further delayed by the end of the bus lane they were counting on.

This a smart move. Hopefully it will embolden PBOT to make similar moves around town to improve transit movement and connections for bikes

Turns out people do want protected cycling infrastructure after all. 😉

Definitely a step in the right direction for PBOT. Though stopping at 12th seems like an odd choice since it won’t connect to any existing bikeway at the east. Connecting to 16th would be better.

I don’t disagree, but I think the reason PBOT stopped at 12th is that the boundary for “Central City” ends there.

Only 5.9% of people do not support this? I think the massive amount of support for this shows that people have a much higher demand for quality bike infrastructure then our city is currently providing.

Is anything being done to make Morrison easier for pedestrians to cross? That is a wide, daunting street for ped x-ing.

I just made the crossing by foot yesterday (at 8th). Definitely not pleasant; had to get the attention of a driver turning off of 8th onto Morrison who looked ready to gun it into the same gap in traffic we were trying to take advantage of to cross.

Removing the EB lane will help a lot, but one thing I’d love to see is curb extensions into the parking area on the south side of the street on every corner. 10 feet doesn’t sound like a lot, but it gets you out into the view of drivers, and is a meaningful reduction in the distance you need to cross on asphalt. Add in the protected bike lane (which should generally be easier to cross than the vehicle lanes) and the ped crossing would be in much better shape than today. That said, I’d also want to see a new signal at 9th eventually, I think (with one on Belmont too). That would give every other block a signalized crossing in this stretch.

Maybe there’s more that can be done, too. I would certainly welcome it!

I had to do a double-take to even see what the difference was, before and after.

Oh, there’s a bike lane in amongst those five motor lanes? I see it now.

Vote Up0Vote Down
« Oregon Handmade Bicycle Show freshens up with new location for 2017
The future of Portland housing depends on biking, and vice versa »