Got a project you want to build? Check out PAZ.
(Photos: PAZ on Facebook)

As affordable space to live and work becomes scarce in Portland’s inner neighborhoods, higher rents are forcing many people and organizations to move further out. As this trend continues, Portland Autonomous Zone (PAZ), a member-supported space for making and fixing things — especially bike-inspired things — is struggling to hold onto their space at SE 16th and Woodward.

PAZ was founded by Brian Smith in 2013 with a “focus on bike fun and DIY sub-culture.” Smith, who likens PAZ to “an Eagles Lodge, but with a focus on DIY tinkering and bikes,” is a regular in the Portland bike scene and can often be found astride his tall bike. He’s also a computer and audio expert who loves tinkering with mobile sound systems and once dreamed of a tall-bike powered tour with his punk band. Smith has kept PAZ alive for the past four years by pouring his heart (and sometimes his own money) into it. He has also worked to recruit new members, whose monthly rents help pay for the space. 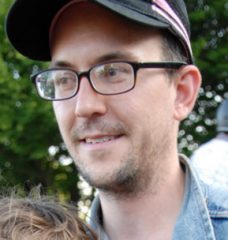 But as rents in the surrounding neighborhoods increase, many of Smith’s paying members have had to move further out — taking their rent checks with them. Smith now finds himself about $2,500 in debt and has started a Go Fund Me campaign to pay it off. He’s thankful that the landlord has kept the rent much lower than surrounding properties (about $1,300 including utilities and internet); but he needs more members and/or donors to keep the space alive.

PAZ is the kind of place you can make or do just about anything. Members use and share all manner of tools including equipment for woodworking, welding and sewing, and much more. The space has a shower, secure storage areas, a kitchenette and two bathrooms. The close-in, convenient location has been the site of numerous free art shows, concerts, gatherings and other events over the years. Their Wednesday Craft Night Workshops have happened weekly for four years. 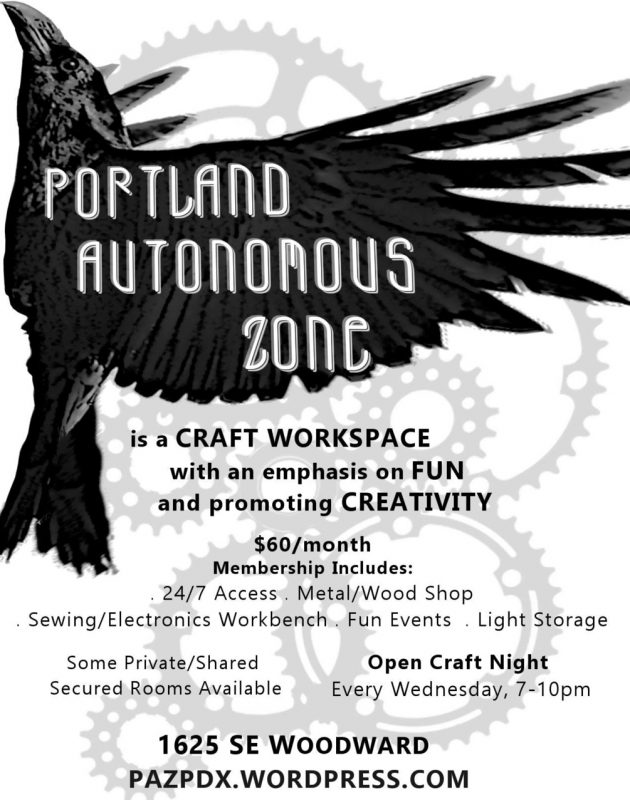 Sole Fiumefreddo has been a PAZ member for about a year. She loves how the space allows here to paint and have access to craft supplies and mediums she wouldn’t normally work with. “I also have the oppportunity to learn about how to fix up my bike or make something new,” she shared with me via email this morning. “Through the social community of PAZ, I’m able to absorb quality and practical skills in a hands-on way,” she added. Fiumefreddo also loves how PAZ members and friends work together to put on bike events. PAZ has served as base camp for the annual Mini Bike Winter, Thursday Night Rides, and many Pedalpalooza events. “The planning and organization of large bike events are huge undertakings,” she says, “but there is so much passion and fun fueling these events, that it turns into a labor of love.”

Nick Schlabach (a.k.a. “Guardrail”) has been a member for over two years. He uses PAZ to make and fix bikes — both for himself, for friends, and often for people who just happen to be riding by (and accepts donations as payment). So far he’s made his Dropout Bike Club bike, tall bikes for friends and a pedal-powered food cart at the space. He’s also been part of work parties to help maintain and repair bikes from the Zoobomb Pyle (the public art sculpture at SE 13th and Stark that’s the meeting place for weekly Zoobomb rides). Schlabach, like Fiumefreddo, says the best thing about PAZ is the community that revolves around it.

“In the rapidly changing area of inner southeast Portland,” says Schlabach, “it’s hugely important to remember what made Portland weird, different and fun and to continue to support that kind of energy.”

Learn more about PAZ and become a member via their website or check them out on Facebook. You can donate at GoFundMe.com.

The only realistic solution is to move further out. It’s not so bad out here near 82nd – biking into inner Portland isn’t that bad at all. If they relocated nearby, membership is something I’d consider…

Yeah moving further out in something we have been talking about if we get evicted. PAZ was formed with goal of forming a strong enough collective to do that, but the rising housing rents have really been hard on DIY scene to thrive. For time being we have rent that is less than anything I’ve seen even on 92nd which is why I’d really like to see PAZ get more attention for what we are doing while we still have space. It’s just a sign of the times that PDX is losing creative class in it’s city center, moving out not just to 92nd, but out of the city all together.

Their website says their not for profit, but have they gone to the trouble of setting up the legal framework to be a non-profit? Something a donation to would qualify as a tax deductible?

I love PAZ but it’s sad everything is pushed out because of high costs now.