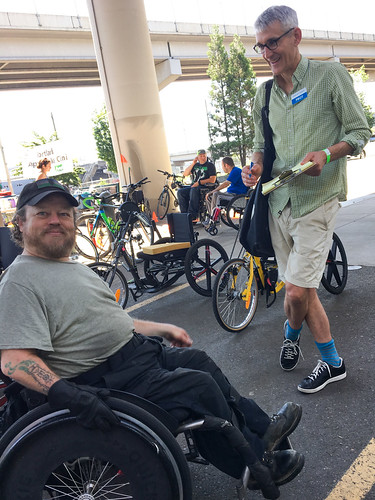 The City of Portland took another step today toward fulfilling a promise they made last summer: To make the Biketown bike share program more accessible to people who are unable to ride conventional bicycles.

If all goes according to plan, adaptive bikes should be available for use by this summer.

To refresh your memory, this issue caught the Portland Bureau of Transportation off-guard last summer, just weeks before the scheduled launch of the Biketown program, when a local advocate for people with disabilities began to question the equity of a bike share system that wasn’t accessible by all of Portland’s bicycle riders. That advocate was Chloe Eudaly, who notched a victory on this issue when PBOT promised to find a solution and then went on to earn a victory at the ballot box when she became a Portland City Commissioner.

Today PBOT launched a survey to garner focused feedback on their plan. According to a press statement, PBOT will make adaptive bicycle rentals available through existing bike rental businesses that located near popular bike paths. Once the system is up-and-running, people who ride hand-cycles, three-wheeled trikes, and side-by-side tandems, would be able to rent one of the bikes near paths like the Eastbank Esplanade or the Springwater Corridor through a City-subsidized program. 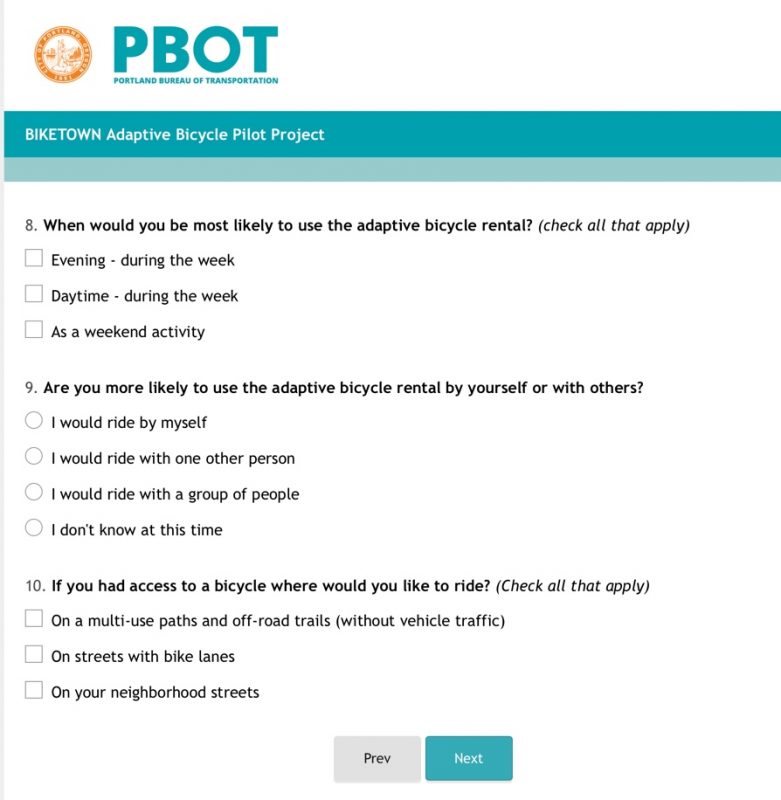 The pilot concept is based on interviews with Portlanders using mobility devices that expressed an interest in an adaptive bicycling rental service. Individuals with disabilities interviewed almost universally expressed a desire and/or need for a staffed service. Individuals explained their need for personal wheelchair storage and assistance with fitting, the need or desire for staff assistance to move between their mobility device and the adaptive bicycle. Because of safety concerns of riding in auto traffic, and a primary interest in exercise and recreation, people wanted to use adaptive bicycles to ride on trails or paths without motor vehicles.

Details are still being ironed out and the public part of this process has just begun. There will be a workgroup and community workshop later this spring. At this point PBOT needs more input from potential users of this service to make sure it hits the right notes. The new survey asks about what types of bicycles are most desired (of the three under considered as mentioned above), which routes people would like to access, how much the service should cost, and so on.

If you or someone you know would use an adaptive bicycle, please share this survey.

This is a much better plan than the one that Eudaly was proposing when she tried to derail the Biketown launch.

Agreed. This is a far more common-sense approach.

That entire comment thread was a bit out of control (myself included) with far too much speculation on Commissioner Eudaly’s intent – most of which was entirely fabricated. In hindsight, I agree she did not try to derail anything, but was merely raising legitimate concerns. I don’t even believe she was proposing one solution over another – most of that seemed to come from the comments thread.

Given the choices, however, I do believe this solution (partnering with local bike shops) to be more feasible than including adaptive bikes as part of the fleet.

You can go to your own link and read her quotes. She wanted them to be “part of the fleet”. That does not work with bike share. That’s all we were trying to say. Providing adaptive bikes is a service that can stand on its own. It will never be part of Biketown, because bike share requires a standardized fleet to function properly.

And I hope you refer to Donald Trump as “President Trump” from now on. We must use titles, after all.

forwarded to a friend that works with the differently-abled…

Just curious, his name’s not Dean, is it?

Wow, this is amazing. Anyone know if any other bikeshare systems around the world have attempted something similar?

I have two neighbors, Brian Willson (double amputee) and Will Groulx (paraplegic) who are expert hand-cyclists.

Brian has 100,000 or so miles on his machines, and WIll has a rainbow jersey (world championship) and Olympic gold medal on his.

Their trikes are very specific to their situations. It is hard enough to build a one-size-fits-all bike, so I ask how rental machines will be adapted to the great variety of disabilities.

Vote Up0Vote Down
« Reward offered for Hawthorne Bridge hit-and-run caught on bike-cam
After year of tragedies, City returns to outer Division with an apology and a plan »