It’s often assumed that cycling is only something that strong and athletic people can do. This couldn’t be farther from the truth.

Not only do people with all types of different abilities enjoy cycling, they do it on all types of bicycles. But for many of them, the barrier to bicycling isn’t physical, it’s financial.

Now there’s a Portland-based nonprofit that’s putting a dent in that problem by raising money to buy “therapeutic tricycles” for people who are unable to ride two-wheeled bikes.


Greater Portland Area AMBUCS (Facebook) was founded last April with the mission of helping people with disabilities become more mobile and independent. One of their most successful programs so far is raising money to buy Amtrykes and then donating them to people in need.

After hearing about this group from a friend of ours who works at Disability Rights Oregon (thanks Esther!), we reached out to the group’s president, Kate Stribling. We asked her a few questions to learn more about their work…

What does “AMBUCS” stand for?

“AMBUCS” is short for American Business Clubs and it was started back in the 1920s as an organization to help people with disabilities. Our chapter, Greater Portland Area AMBUCS, is a local subsidiary of National AMBUCS, Inc. They shortened the name to “AMBUCS” in the 1960s when they became an official 501c3.

Who is behind the local AMBUCs chapter?

Our board is a five member group of volunteers consisting of physical therapists and parents of children with disabilities. We currently have no paid staff members but we are hoping that will change in the coming months as we look to hire a grant coordinator and an office manager.

How many trikes have you purchased so far?

To date we’ve provided 14 Amtrykes (Amtrykes = therapeutic adapted tricycles designed and made by AMBUCS) for individuals of all ages and abilities, across Oregon and SW Washington. We’ve done this through support from National AMBUCS, The Reno-Sparks AMBUCS chapter and from individual donors. 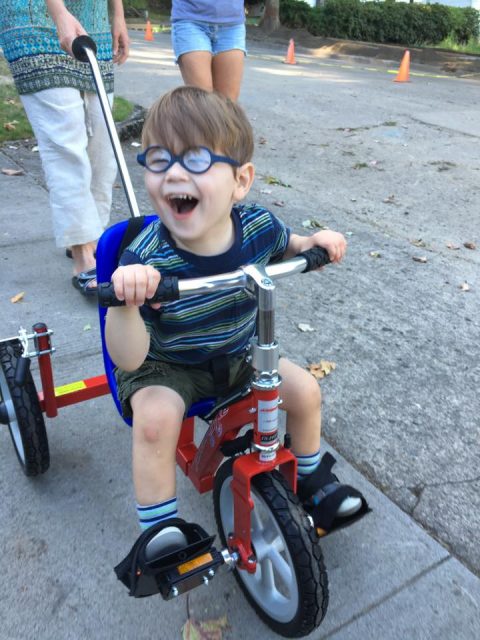 You know the feeling, and now this guy does too!

How are these trikes different?

These bikes are pretty amazing… almost any adaptation a wheelchair has, these have. So for super medically fragile kids, that need extra support not just from three wheels but for trunk and head control or even for a ventilator, Amtrykes are game changers! They let kids with disabilities participate with their families and peers in a super age appropriate way.

Is there a goal for number of trikes you’d like or is it an ongoing need?

The need is definitely ongoing, Therapeutic tricycles do not come cheap, with base models ranging from $1315 – $2064. Despite health benefits, these tricycles are not covered by insurance which means families either have to pay out-of-pocket or receive sponsorship from non-profits (like us) for their child with a disability to be able to ride a bike. Currently we have a GoFundMe campaign going to support adapted tricycles for differently abled individuals in our community.

Stribling says they will give away another five tricycles to Oregon kids and teens this Saturday at Legacy Emanuel Hospital. (Please don’t just show up hoping to get a bike! The recipients have been pre-selected from the AMBUCs “wish list”.)

For Stribling, the inspiration to be involved with AMBUCs came from her work as a physical therapist in Alabama. “Our local AMBUCS chapter supplied a lot of those,” she said. “When I moved here there was this huge unmet need for adapted tricycles… I was hearing from families and even from other therapists that it was hard to get bikes funded… so I thought, let’s start an AMBUCS chapter and get these kids some wheels!”

“Riding a bike should be available to everyone regardless of physical ability,” Stribling continued. “I love riding my bike and I want everyone to be able to experience that same freedom and independence.”

If you’d like to volunteer or get on the wish-list for a trike, check out the group’s Facebook page or email them at pdxambucs@gmail.com.

I have a friend with a trike like this. She likes to bring it into stores.

Billy Goat Vintage gave her a hard time about it.

If you ever see anyone getting shit from a store for their bicycle quality mobility device. Make a scene.

This is awesome. I don’t even think Bike Portland negativity can find anything to complain about with this!

I can appreciate the idea that people of all physical abilities can indeed ride bicycles, but it’s important to point out that most conventional (and more affordable) bicycles available on the portland market tend to present a barrier of physical ability, and if someone wants to ride a trike, recumbent, or other cycle configured to their abilities, they generally have to pay extra.

When we hear reports that such bikes have been stolen, it’s said in such reports that those thefts are especially devastating to these individuals because such bikes provided an incredible amount of freedom in mobility and enhanced their lives beyond the measure of other conventional means (e.g., wheelchairs, walkers, etc) available to them.

It’s not a barrier posed by the biking community itself- it’s one that is built into the manufacturing and design of these vehicles by the industry. But I’d like to see more awareness of this barrier. The idea that “only” strong and physically fit people are bike riders is an incredibly inaccurate idea indeed, but is reinforced by the “tax” that others have to pay for bikes with different designs.

I’m so glad to hear that these groups are working to remove those barriers!

This sounds like a really cool program! It’s good to get ’em hooked on bikes early. 🙂

For older riders with challenges, there is a great shop in Portland called
Different Spokes:

One of the co-founders has headed up Disabled American Veterans for years, and has worked on adapting cycling and other athletic endeavors for years.