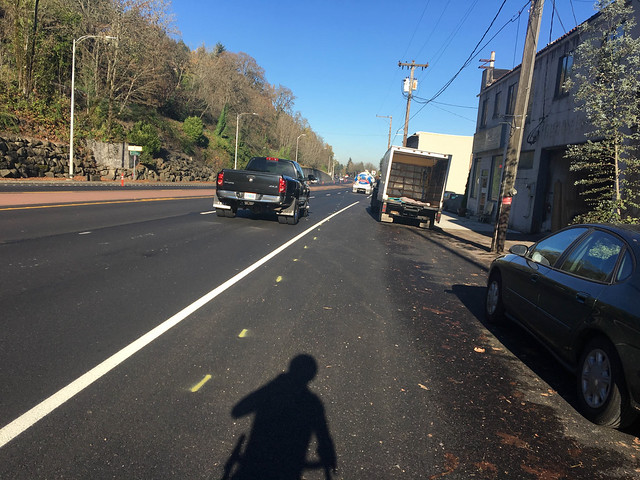 The Oregon Department of Transportation has completed a major repaving project on a key section of Highway 30 that’s a popular bike route between the St. Johns Bridge and Sauvie Island.

Back in March we said this was a “golden opportunity” to make the highway better for bicycling. Unfortunately ODOT didn’t make any major improvements to bike access; but the shoulder is now a more consistent width throughout the project’s seven-miles (between the bridge and McNamee Road). We were also disappointed that the shoulder wasn’t striped until a few days ago — well over a week after all the lanes for auto use were completed and striped.

Portlander Ira Ryan (co-founder of Breadwinner Cycles) pointed out the lack of striping in a post on Instagram:

Dear ODOT or Portland, I have never wished for a thin white line more than riding along Hwy 30 since you repaved it last month. You painted everything else but forgot to give cyclists a proper shoulder to ride all the way to Sauvie Island. Can you make this happen soon? Thanks for listening. Yours truly, scared cyclist. #notsafe #biketown???

I contacted ODOT about the lack of shoulder striping and pointed out that it created dangerous conditions for bicycle riders — especially on a highway that has a 50 mile-per-hour speed limit, a high volume of truck traffic, and is very popular for cycling. ODOT Community Affairs Coordinator Susan Hanson said the striping wasn’t finished because the contractor didn’t have enough days of dry weather to do the installation. In a follow-up question I asked Hanson to try and understand how it feels to be a bicycle rider when all the striping needed for driving was prioritized and completed despite the weather.

“I do understand your view on the order the striping was done in,” Hanson replied. “We will definitely keep that in mind for future projects for the shoulder striping to be done earlier by the striping sub-contractor.”

Hanson also shared the details on how this project has improved the shoulder for cycling:

The shoulders on US 30 in the project area will now be a minimum of 6 feet wide wherever possible. There are a only couple of areas: one just south of Linnton and one around Bridge Avenue where the shoulder will only be 5 feet wide for a short distance.

I rode in the area on Tuesday and can confirm that the striping is finally complete.

It’s important to note that there is a distinction between a shoulder and a bike lane. The stretch of Highway 30 between the St. Johns Bridge and Sauvie Island is technically considered a shoulder. This means it doesn’t have the same legal standing that a bicycle-only lane would have. It also comes with just a four-inch white stripe (fog line) instead of a six-inch stripe. And you won’t see any bike lane symbols. 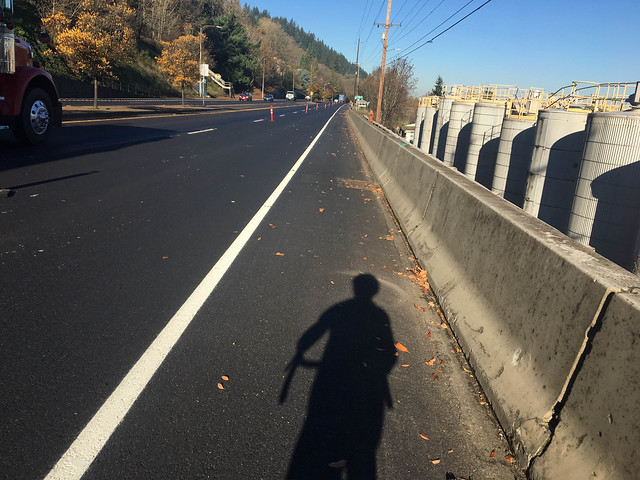 The new pavement is nice and smooth; but I worry that it only encourages higher speeds because people don’t have bumps or potholes to worry about.

As you get into Linnton, the same danger spots remain. This fabrication shop’s truck is always pinching the shoulder in this location… 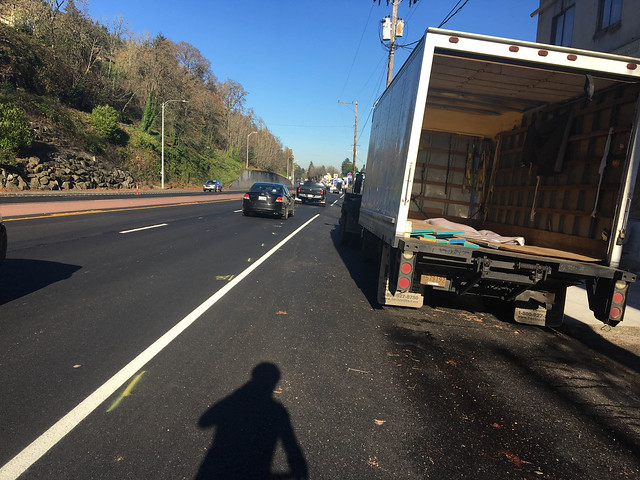 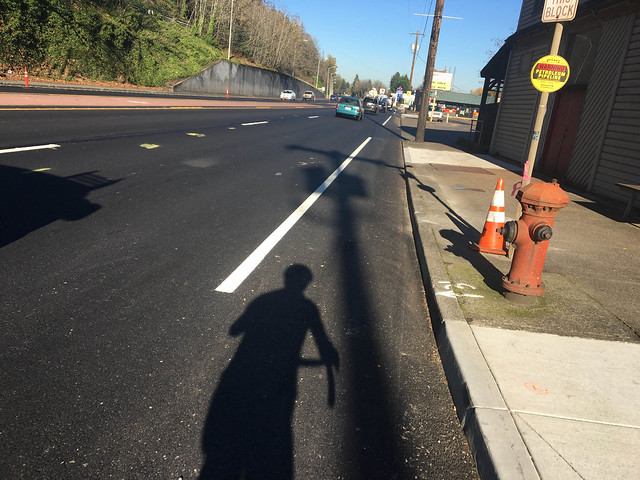 North of Linnton, the shoulder opens way up and there aren’t any driveways to worry about. Unfortunately the speed limit goes up to 50 mph… 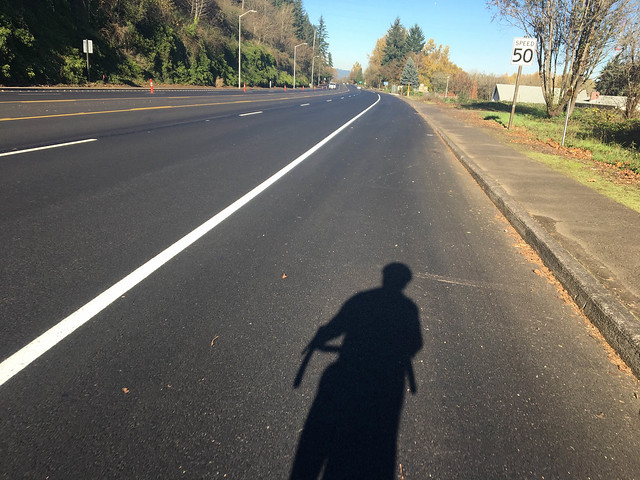 And unfortunately ODOT’s sub-contractor doesn’t appear to care at all about people who travel in the shoulder. They placed several of these signs on both sides of the highway, forcing me to merge with people driving over 50 mph… 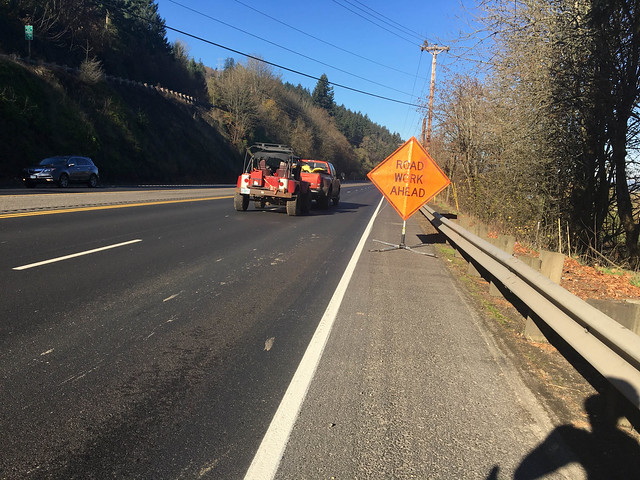 In the southbound direction, I was happy to see that ODOT has added bumps to the shoulder lane stripe. These will hopefully be a visual and audible reminder to people in cars to stay away from the shoulder unless they need to park for an emergency… 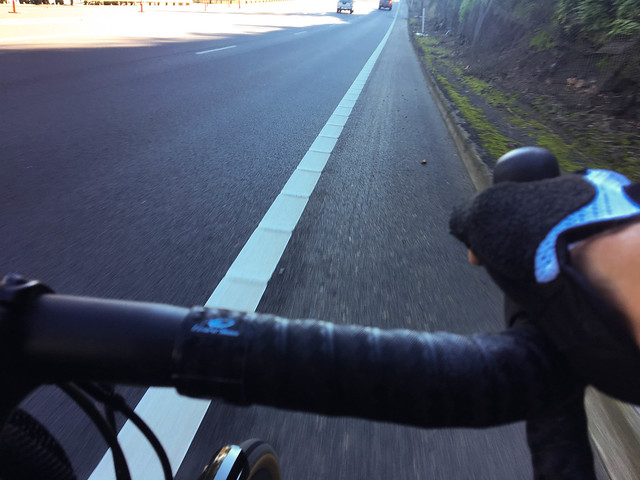 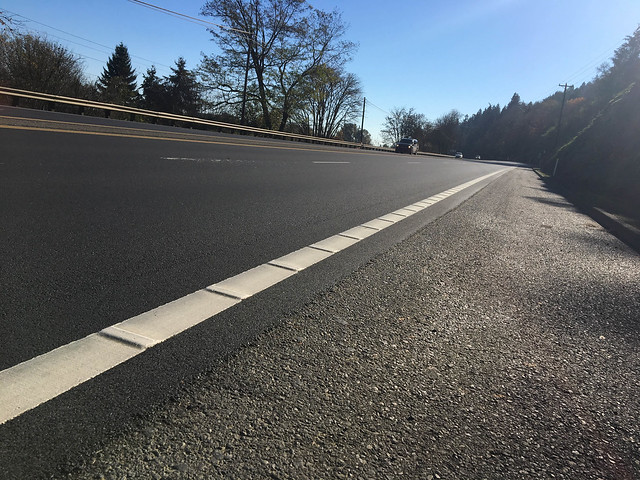 While ODOT is proud of what they’ve done for bicycle riders in this project, I didn’t feel much difference overall. The fact remains there’s a lot more that should be done. Given the importance of this this segment of highway in the regional bike network, it should be considered a bicycle safety corridor with striping, signage, and other design elements that make cycling as low-stress as possible and makes it clear to users they should expect bicycle traffic. As you can see in the overhead image below there’s a painted center median and the standard lanes give motorized vehicle users more than enough space. 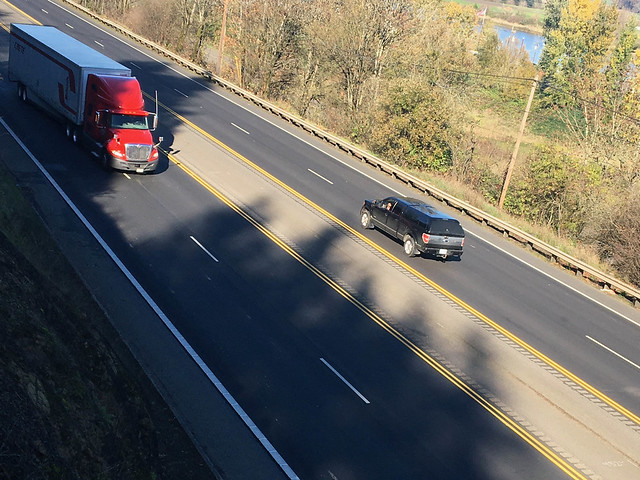 Hopefully in the future we can make more — and more significant — bicycle access upgrades on Highway 30. Until then, ride with caution and make sure you use the ORCycle app to report problems and maintenance needs directly to ODOT.

Have you ridden this yet? What do you think?

Jonathan – per the contractor’s placement of “road work” signs in the shoulder…if this was correct or not…you would need to review the TCP / work zone plan for this phase of the project.

At best – if this was allowed – then ODoT needs to tighten up this practice up for VZ in urban areas and mandate a “shared shoulder friendly” sign [perhaps it is on pole behind the guard rail, etc.]; or

At worst, the TCP for this work zone was not followed through AND not inspected to be corrected…

It is an interesting divergent message that ODoT gives on this project work but not on the Saint Johns Bridge:

“The 12 foot outside lane is required for trucks and buses …said Hanson.

…vs…the 10 foot outside lane w/o shoulder for the bridge.

[What we need is for the Oregon freight industry to come out an support for wider and safer lanes vs. more narrow substandard lanes.]

Thanks for the hard work, Jonathan.

How about a rail-with-trail on the adjacent rail line?

I’d love to see a rails-to-trails project that connects rail alongside Hwy 30 to the Banks-Vernonia trail. Then if we hookup the coast trail to B-V, you’d have a very nice pleasant route to the coast.

Funny, my thought when I looked at the pictures were “that dang truck is always there” and then felt better knowing others notice it also.

TLDR: thanks to Hwy 30, the St. Johns Bridge is still a bridge to nowhere.

Germantown is still a nice climb, but tackling Rocky Point or Logie Trail again is not worth my safety or sanity.

Germantown is the busiest crossing of the Tualitin Mountains after Cornelius Pass. Logi Trail and Rocky Point are much less used.

Can you use the ORCycle app to report a hazard at a location when you didn’t have the GPS running beforehand? As I recall, it’s not like pdxreporter where you can just set a point on the map.

Where are the bicycle stencils?

Well, how do we make it a bikelane?!!

Are jersey barriers that expensive?

Seems an easy solution to preventing head on collisions and to providing a protected bike/pedestrian route.

Jersey barriers take up more space than people realize (close to a couple of feet wide IIRC) and prevent the use of the shoulder as a shoulder for emergencies.

Does that wide middle section between the two flows of traffic extend along the route? Just seems like the roadway could be modulated to allow bike/ped travel, turn lanes, and a shoulder. That’s what I was getting at.

they have their data backwards… not surprising…

wait, maybe when they say inside lane they mean the lane closest to the center median?

seems I’ve been calling them the wrong thing, which according to the google is pretty common…

I had the same confusion when preparing for my Taiwan drivers license in Chinese, it’s taken a few years to get it sorted out in my mind the other way and still gives me pause when I hear it as I mentally check I’m getting the direction right.

Does anyone know if the gravel that spreads into the shoulder from Bob’s Metals lot has been addressed? One of my least favorite parts of that ride since it sits behind a curve and you don’t know whether you’ll be forced into traffic until you’re right on it.

I’ve always wondered how is that even legal?

That horrible curve and the other pinch point at Balboa a stone’s throw closer to Portland are within the next “repave” phase which will be St Johns Bridge to Portland. That will be extremely important. If the recently-completed phase (Sauvie to St Johns) is any indication, sustained pressure will be needed for any improvements to ped or bike access or safety. It feels a lot like begging for scraps. And, when you have a small success you’re happy but can’t help feeling lied to about all the reasons you had previously been told “no.” That experience is not unique to ODOT if you recall the Naito bike lane at Steel Bridge.

I’ve ridden it a couple of times now, once without striping, once with. It’s a little wider, and clean for now. I pick up speed heading into Linnton at which point the parked vehicles, driveways, and cross streets still make me nervous so if there’s no one driving in the right lane I ride a couple of feet into the roadway. I’ve stopped riding up Germantown because it’s too crowded so when I leave St. John’s I ride up Springville when it’s still dry out and now that it’s soggy I’ll head out 30 and climb Logi or Rocky point.