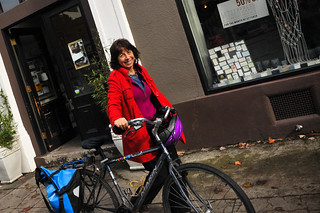 Dulken after a visit to one her customers yesterday.
(Photos: J. Maus/BikePortland)

Welcome to the latest installment of our Bikes at Work series. Read more here.

You might not know her name, but you have probably seen Diane Dulken’s work around town. And if her plans work out, you’ll be seeing a lot more of it in the future.

Dulken, a former reporter at The Oregonian who worked at the Portland Bureau of Transportation’s media relations department from 2013 until July of last year, is now putting her effort into Sunnyside Art Studio. It’s a return to doing art, mixing in her love for cycling, and sharing it all with the city she loves that goes back nearly two decades.

In the late 1990s when Dulken was a board member with the Bicycle Transportation Alliance she created a marketing campaign for the city’s first artistic bike racks. That work earned her an Alice Award from the BTA in 2001.

These days Dulken spends part of her work week creating greeting cards and delivering them by bike to retail stores throughout Portland. She named her business Sunnyside because it’s the name of the school she volunteers at (as a teacher’s aide), it’s the neighborhood she lives in, and “It’s spreads a bit of joy and irony because we live in one of the rainiest places.” 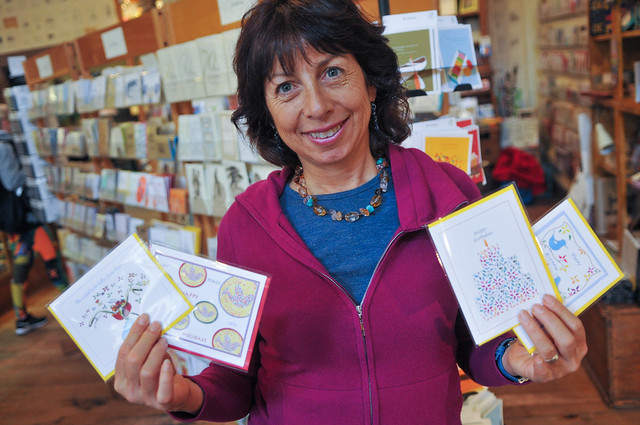 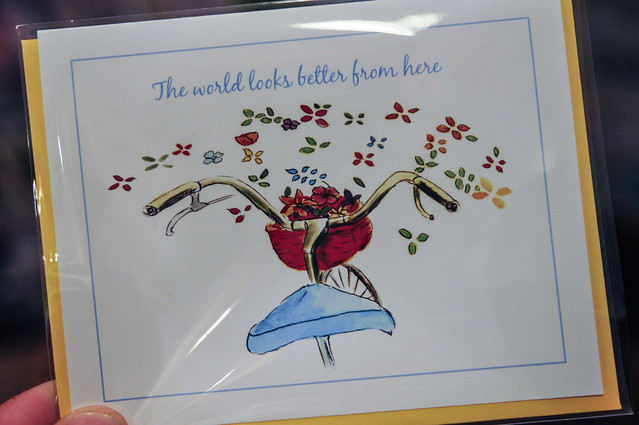 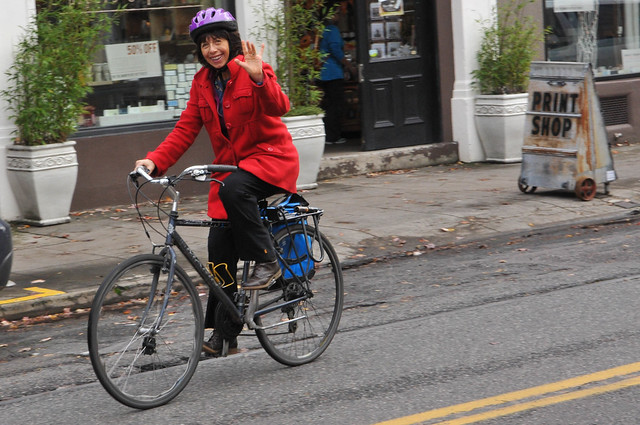 It was her work with students in the art program at Sunnyside Environmental School in southeast Portland that inspired her to create her first cards eight years ago. Dulken says she’s always been an artist but, “My palette got a lot brighter working with the kids.”

Among the 30 designs she currently has on offer is one that includes a bicycle and the message, “The world looks better from here.” That design was commissioned by the City of Portland for use as a thank-you card for participants in the recent Open Streets Summit.

For Dulken, using her bike to power her microbusiness isn’t an advocacy or marketing ploy, it just comes naturally. “It’s the opposite of an obligation. If I had to drive, that would be an obligation.”

If you or your company wants to support a friendly local business that goes by bike, Dulken specializes in custom holiday cards and now is the time to get your order in. You can find Dulken’s cards at Oblation Paper & Press (516 NW 12th), City Market NW (735 NW 21st), the Reed College Bookstore (3203 SE Woodstock), Finnegan’s Toys and Gifts (820 SW Washington), and a few other locations.

Diane was a wonderful colleague and is a great person. I will be placing a custom order for my end-of-year greeting cards. I encourage others to do the same!

I was honored to serve on the BTA board with her and glad to see this next move!

Mighty fine work, Diane.
Looks like I better get you that trailer sooner rather than later….