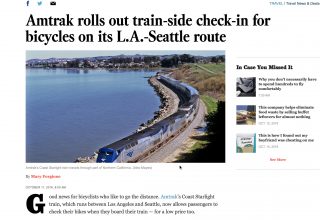 This week’s Monday Roundup is brought to you by our friends at Bicycle Fitting Services, who reminds you that it’s the perfect time of year to dial-in your fit for maximum power and comfort.

Here are the best stories we came across last week:

Bike valet at the train station: Great news from Amtrak: You can now simply check your bicycle as luggage on the Coast Starlight route which goes from L.A. to Seattle.

Utrecht makes it look easy: This transformation of a street in the Dutch city of Utrecht shows the pinnacle of people-centered design. And yes, it unabashedly comes at the expense of space for driving.

An opportunity for cargo bikes?: Good news: University of Washington now has a corporate-funded Urban Freight Lab to figure out more efficient urban, last-mile deliveries. Bad news: The word “bike” doesn’t appear in the article and “drones” and “autonomous vehicles” does.

Perspective on “inner cities”: After an awkward moment in the second presidential debate, The Black Urbanist Kristin Jeffers lays out some important perspective about who lives where (and why).


Best traffic cone evah: The City of Bozeman is sick and tired of people speeding through a certain intersection so they got creative and installed a six-foot high traffic cone. It’s working.

Build where collisions happen: Strong Towns makes the case for using collision maps to inform where to build bikeways. We do this to some extent already, but the collision dataset is woefully incomplete.

Holy mobility: On Yom Kippur in Tel Aviv people know intuitively that driving just isn’t the right thing to do. So they all ride bikes instead and the city becomes a “playground.”

Race promotion needs help: We’ve been intrigued by local signs that it’s getting hard for race promoters to make a living. Turns out it’s also a national problem.

Research on collisions: “Male cyclists, with all else being equal, were less likely than female cyclists to be involved in conflicts and dangerous conflicts at the studied intersections.”

Road safety in Canada: A spike in traffic deaths and injuries to bikers and walker isn’t just an American thing. CBC News in Canada cites an urban planner who says their 2016 stats so far show the rate of people driving into other, more vulnerable roadway users has reached “public health epidemic” levels.

Walk and you will die: A business group in downtown Pittsburgh has found a way to kill their business: They’ve paid to have someone in a grim reaper costume walk around and “educate pedestrians” about safety.

Too wide to ride: This is a scary trend in trail management: Forest Service in Colorado drastically widened former singletrack in the name of “safety for all users.” Barf.

Robin Williams’ legacy: We knew Robin Williams loved bikes, but we had no idea he had such a remarkable collection. And now it’s being auctioned off.

Thank you Denver: This article reads like it came right out of my own dreams. Instead of investing in old technology of parking garages, the City of Denver is making sure any new ones can be easily retrofitted for other uses once private cars become passé.

Read a bike-related story worth sharing? Drop us a line and we’ll consider it for next week’s roundup.

Love the story about designing parking garages so they can be retrofitted in to something useful once happy motoring is over. Recent cutting edge work in the petroleum energy and economics field is showing that due to the declining net energy availible in each harder-to-get barrel of oil the entire age of petroleum powered automobiles could be completely over by 2030. Since there is so much embeded petroleum in the manufacture of each electric car it will only be economically practical to replace a small portion of fossil fuel autos with electric ones. Cycling for everyone is on its way weather they like it or not. The parking garges we are building now will be useless far before they are worn out.

got a citation for that petroleum economic forecast? (not disagreeing, just asking)

Some of the best work in the field of declining ” full system” net energy is being done by a geology/economics consulting firm called the Hills Group, but their reports are behind an academic/industry paywall. Here is a good simplified synopsis of the concept by DR. Louis Arnox

Repurposing parking garages is a bad idea — this city actually needs more of them.

Parking space is expensive and if we simply require those who use it to pay real market rates for it rather than let everyone consume enormous amounts of space at public expense, you’ll find people naturally shift towards other ways of getting around.

Once enough people have decided they don’t like paying the real costs and that capacity isn’t utilized, it then makes sense to dedicate that space to other purposes.

Utrecht makes it look easy: seems strange that cars parking on the sidewalk was the solution…

Utrecht is more like a mini Seattle in terms of density, or about 35x our downtown. Portland is a sprawling suburbia by comparison, not counting our suburbs.

Admittedly, it’s been decades since I was in Pittsburgh, but other than downtown, that was one anti-pedestrian location. Actually, it was anti-anything not motorized. outside of downtown, there were very few sidewalks. Just strolling to the grocery store from my wife’s uncle’s house was a death-defying act of boldness that was met with extreme hostility by the locals. I hope it has changed, but a $50k campaign to blame pedestrians for having cars run them down suggests that it has not..

You take your chances when checking your bike like luggage with Amtrak. They handle both the same way. At the Eugene station I once watched a bike fall out of the baggage car when the handler opened the door. He quickly jumped down and tossed it back in.

B. Carfree
Reply to  Mike

I think the new system requires the person checking the bike to hand it up to the people in the baggage car and be on hand to receive it from them at the end of the trip. That’s the way the Cascades works. I think the person to person interaction of handing over the bike makes the baggage handlers be more careful with the bikes since it’s no longer an anonymous annoying object, but something that belongs to someone in particular.

I sure hope it’s like that since I’m hoping to hand them two halves of a tandem (for double the fee). I’m going to have to go check with a Coast Starlight crew or two to make sure this is okay with them.

I’ve hefted my bike up to the baggage handlers in Olympia, Portland, and Eugene more times than I can count. They have always treated my bike well. So very happy to see the Coast Starlight now available as an option; friendlier times of day from Eugene!

Chris I
Reply to  Mike

I’m sure that’s an exception. I ride Cascades a few times each year, and the bikes in the baggage car always look very secure (you can see them by walking to the end of the train and looking through the baggage car window). I just wish they could accommodate cargo bikes. I’ll do the lifting!

I use the same service out here in the Piedmont. All the service to and from North Carolina also have the bike hooks. Like Cascades, you hand up the bike to the baggage car attendant, who then hands it back to you at the destination. For any destination originating and ending between Charlotte and Raleigh, there is no charge for the bike, but you still need to reserve the bike space; everywhere else the fee is $20 per ticket. I used the service just two days ago, between Greensboro and Durham – the bike was well-handled.

I love the six foot tall traffic cone. There are so many locations where these would be just perfect.

Mike Sanders
Reply to  B. Carfree

GlowBoy
Reply to  B. Carfree

Know what I love about the traffic cone besides the fact that it exists? The crash barrel inside. You KNOW some dork is going to try knocking it over with their vehicle – and end up with a wonderfully rude surprise.

The Coast Starlight now has hooks like the Cascade trains. It’s not a huge number, maybe six? So it’s a good idea to reserve a hook if you can. If the hooks are full I guess you have to box your bike, but I haven’t asked them about that.

I believe that’s right – I rode the Coast Starlight from LA to Portland with a bike more than 10 years ago, and I was required to box it. So, that’s most likely the fallback if they’re out of hooks.

I would love to see some bike hooks on the Empire Builder – opening up summer bicycle touring in Glacier Park.

I’ve always been intrigued by taking my bike on the train, but there are few enough spots I wonder if a folder is a better way to go for people who travel.

What would be really nice is if the airport would rent bike lockers. Unless you ride a total beater, locking to a rack while you’re on a trip is not a realistic option unless you like buying new parts.

The bikes I’ve seen there have all been intact.

…that said, I wouldn’t leave mine there.

I’ve left my Surly touring bike there, it’s an ok bike but has some obvious miles on it. Basically locked like I would on the street. No issues. Strangely the presence of a nearby MAX line did not induce a micro-burst of thievery!

PDX Airport would be a perfect location for a Biketown rack fitted with cargo bikes. There is a signposted bike route along the south side of Airport Way leading to the I-205 trail, but it’s not promoted or well signed from the I-205 trail – or from PDX, for that matter. An entrance / exit for bikes at Amtrak Union Station would help matters there. (Another potential Biketown rack location!)

The real Amtrak story this year is not the valet service, but the fact that the Coast Starlight to California AND the Empire Builder (which goes from Portland to Spokane, Glacier Park, Minneapolis, Milwaukee and Chicago) got bike hooks this year.

But as Bay Area Rider pointed out, only about half the Amtrak stations on these routes have baggage service. The stations without baggage service are often lonely unstaffed platforms where you better be ready with baggage in hand because the train only stops for a minute or so. If you use the bike service, you cannot get your bike on or off the train at these stations, period, so you’re still limited to folding bikes at these destinations. Unfortunately this includes Bingen, WA in the Gorge (as well as Leavenworth, WA, where I would really, really love to take the train with my bike).

Usually with Amtrak, bigger stations mean longer stops and less hurried bike loading–much easier to load a bike in Portland than in Vancouver or Kelso, for instance.

I was going to say, “we” have a car free holy day every week–Shabbat.

Yup, and if I remember correctly, riding a bicycle is also considered work and therefore is forbidden on Shabbat.