The ‘Cross Crusade’ begins a new era this weekend A few of the 1,500 images we’ve taken of the Cross Crusade over the past decade. See them all here.
(Photos by J. Maus/BikePortland)

This weekend the race series that defines cyclocross in Portland will turn over a new leaf as it launches into its 23rd season. First held in 1993 — before many of its current participants were even born — the River City Bicycles CycloCross Crusade has grown past its adolescent years and is settling into adulthood. The antics the series is known for are by no means coming to an end; but you might notice a slight smoothing of the edges and a shift from partying to professionalism. 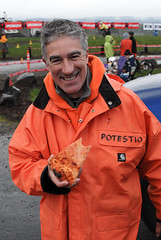 2016 will also be the first season in over 20 years without former leader Brad Ross actively in the mix.

Ross had been with the Crusade almost since the beginning and was the director of the event until he retired last year. During his tenure the series grew far beyond its humble beginnings and grew into the largest one-day race event of its kind in the world. At its peak a few years ago nearly 1,600 people raced in one day across numerous categories from nine-year old juniors to 60-year-old retirees. By contrast, there were only about 70 racers total at the first event in 1993.

This season there’s a renewed energy around the series. The Crusade is changing in ways that will have a significant impact on the local and — if everything goes as planned — even the national racing scene. We talked to co-founder of the series Rick Potestio yesterday to learn more about what’s new.

While some might consider Potestio to be the poster-boy of the Crusade, he’s stepped back for the past few seasons. Now he’s one of eight owners of CycloCross Crusade LLC, a new partnership and significant change from past years. Brad Ross had formerly run the series as a Sole Proprietorship which meant all the decision-making and responsibility rested on one person’s shoulders. The new LLC, Potestio says, gets the Crusade “back to its original vision” where a team of people lead the organization — from running the weekend operations to achieving larger goals.

Potestio says the new committee-based model of decision-making has injected a new enthusiasm into the event. “It’s a big move internally that will hopefully show up to participants who will see a spirited and engaged group of people putting this thing together.” 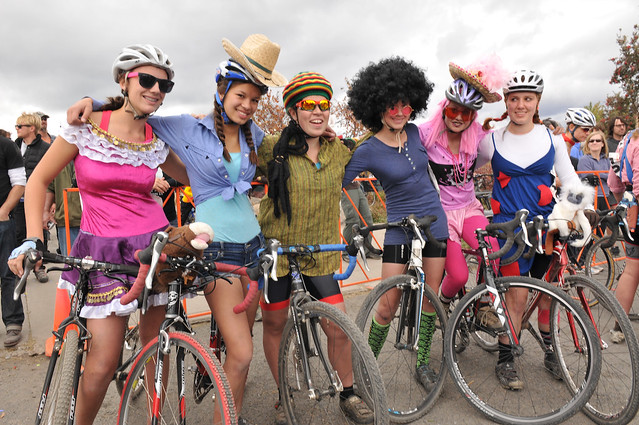 The annual Halloween-themed weekend in Bend is always memorable.

He also said that the Crusade is getting back to its roots: To grow the sport of cyclocross by developing new talent and supporting elite racers. Yes, that means partying for partying’s sake will take a backseat to putting on a world-class race.

“We really weren’t doing the sport as a whole a service if we just focused on the tailgating… We want to get back to promoting racing so riders can develop the skills they need to be competitive.”
— Rick Potestio, CycloCross Crusade

“We’ll never leave behind the middle-aged Cat C racer, that’s our core group and the foundation of fun,” Potestio said, “But we realized we really weren’t doing the sport as a whole a service if we just focused on the tailgating component. We want to get back to promoting racing so riders can develop the skills they need to be competitive on the regional and national level.”

There are several ways the the races will change to reflect this renewed focus on youth and elite development.

You might have noticed in the race-day schedule that the Crusade will now include podium ceremonies throughout the day. Potestio says there will now be award ceremonies for all 25 racer categories. It’s all about “upgrading the race-day feel” according to Potestio. They had never done podiums in the past, he added, because the race production crew was simply too tapped out with other tasks that it never got done. “We just feel like having podium ceremonies is really important, and now we’ve gotten our act together on the production side so we can make it happen.”

The series has been shortened this year due to three double-weekends.

Another big change this year is that the elite racers (men and women Category 1/2) will ride on a different course that everyone else. Potestio says not only will the fastest racers go for 15 minutes longer, they’ll do it on a slightly altered course that’s more technical and challenging, “So they’re getting a course that really pushes them.” This more difficult race will also be more spectator friendly. And, in another change this year, it will be the finale of the day.

In past seasons Crusade organizers moved the elite race to the middle of the day hoping it would attract more spectators. But that backfired because so many other racers (which make up the bulk of spectators) were preoccupied with warming up or cooling down from their own race. Potestio wants as many people as possible to line the course and cheer on the main event. The new schedule allows racers in the largest categories to get done early so they can relax, grab a pizza and a drink, and enjoy the festivities.

Speaking of enjoyment, the race series is still not all about racing fast. There are other ways to win even if you’re first to see the checkered flag. The traditional Grail Hunt is alive and well. The hunt is a citywide scavenger with 13 “relics” hidden along a 40-mile course that’s posted on CrossCrusade.com. 12 of the relics can be cashed in for a season pass ($200 value) and there’s one grand prize that’s yet to be determined (in the past the winner received an expenses-paid trip to Europe for a cyclocross World Championships race).

Potestio says the Grail Hunt, along with the big series-ending party and other surprises (beware of the Black Knight during your race!), are ways for people to have fun even if they are competing for 60th place. 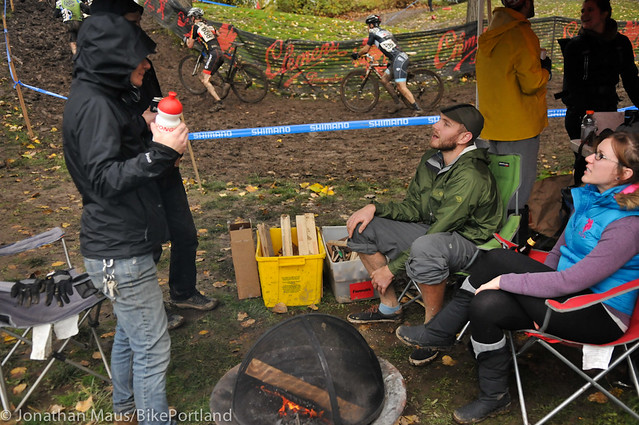 The tent scene is on point at the Crusades.

Since people spend most of their time at a Cross Crusade event off their bike, the race’s festive atmosphere has become as legendary as the competition itself. The expo area and the bustling team tents are the heart of the event. But for newbies, it can be intimidating to break into the tight-knit team communities. Potestio says this year they want to break up those cliques and get teams and newbies to intermingle. “We don’t want people who are new to racing to be intimidated by all the matching kits and team tents. The tents have become like clubhouses. We want to make newbies part of this community.” To do that he’s going to hide free beer in a random team tent and tell a new racer where it is. He might also “fire” someone from one team and ask them to join a different team for the day.

While the Crusade is growing up a bit this year with the owners’ sights set on attracting a World Cup event to Portland someday, you can bet the fun and shenanigans will never end.

“We don’t want to lose sight of this being an Oktoberfest with bikes to some degree, that’s what differentiates us from other races. But we don’t want it to just be a big party in the park. This is a legitimate bike race.”

I’ll be out there all weekend racing and talking to friends old and new. Come introduce yourself!

Get the latest updates by following the Cross Crusade on Facebook or check out CrossCrusade.com.

Our 2016 Cross Crusade coverage has been made possible by River City Bicycles and Giant.

I don’t think that is true actually, but it does make it simpler to cross over to usa cycling events in the matched USAC cat. Obra racers would still have 0 points in terms of qualification events. Or so I understand it.

Jonathan, can you respond to RF’s comment? I’m curious. Thanks!

Rode the Grail Hunt course today. Got nice and dirty 🙂