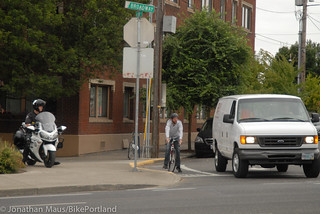 Our roads are so full of dangerous and irresponsible vehicle operators that finding them is usually as easy as shooting fish in a barrel.

Case in point: In response to a spate of collisions caused by reckless and illegal driving, the Portland Police Bureau decided to conduct a traffic safety mission on Friday night. For two hours between 7:00 and 9:00 pm they patrolled the Martin Luther King Jr. Boulevard and Grand Avenue couplet between the Ross Island Bridge and Broadway.

In those two hours they wrote 31 traffic citations and 34 warnings. They also arrested two people — one for driving under the influence and another person for outstanding warrants.

This enforcement action is part of the PPB’s ongoing efforts to support the city’s commitment to Vision Zero — a long-range plan to eliminate deaths and serious injuries on our streets. According to the police they’ll continue these enforcement missions “as staffing allows.”

The City of Portland also partners with the PPB on crosswalk enforcement actions about once per month. That program has resulted in thousands of traffic stops, citations, and warnings since it began in 2005.

Demands for more enforcement are common among many who feel it will lead to safer streets. But experts and advocates who work in Vision Zero and related fields warn that it’s not that simple — especially in light of a system that discriminates against black people and other people of color. This issue was the subject of a recent episode of the Why Isn’t Anyone Talking About This podcast where guests discussed how some communities don’t equate more police with more safety, and in fact often feel like the threat of being killed by a police officer outweighs the threat of unsafe streets.

This is a step in the right direction, but we need our infrastructure to discourage and prevent negligence from killing us. There aren’t enough lawpersons out there to ticket and enforce acceptable driving behavior, nor do we want to live in a police state.

“as staffing allows”? don’t we always have staff for enforcement of the law? maybe I don’t understand why we have police…

how much $ does one of these enforcement actions cost? and how many staff does it take?

where do I sign to have my taxes redirected to these actions?

It would probably be worth your time to talk to employees of the police or sheriff’s department (officers or civilians) about the demand on their time.

Like every other business organization on the planet, they have to make choices about priorities, and staff accordingly. You’re welcome to make traffic enforcement your priority — but then those officers are not responding to domestic abuse, theft, violations of restraining orders, reports of drug sales, or whatever.

If you want more officers on the street, campaign for higher taxes (and be prepared to argue against those who protest the rise of the police state). If you want the officers we already have to spend more time on traffic violations, list specifically the crimes you want them to ignore so they can write tickets.

It’s easy to complain. It’s much harder to address priorities like a responsible citizen.

Can we start with demanding that police officers drive the speed limit, unless they have their lights on?

In my city our BPAC has written to the Traffic Supervisor requesting that officers make a concerted effort to use turn signals, as they are role models. I’ve never seen such a lack of signalling as I have in California.

PPB is roughly 40% under staff, and has been for years. They cannot get additional officers as noone applies.

Portland’s not Missouri, nor is it Baltimore or Chicago where you have a largely white suburban police force patrolling impoverished largely black cities. I think we can set aside the hysterical fear of massive deaths of racial minorities by racist cops. The fact is that our near-complete lack of traffic law enforcement has made our streets into killing fields. Add in the fact that there are very minimal punishments for people who kill with cars, and one can see that if we want to have civilized streets, our largest public space, we need to enforce the law.

I’m bothered that some people feel that traffic enforcement creates a police state. These laws are on the books for a reason and that reason is that without them, or without enforcing them, we have CARnage on our streets. I’m not okay with that.

We do have a problem with unequal enforcement, as well as with inequitable penalties. Portland isn’t some uniquely non-racist utopia — oddly enough.

Let’s not assume that the white guys know best. If Portland’s communities of color have a problem with the police, they’re likely the ones who can best tell their stories. Our job is to listen.

I’m not suggesting enforcement shouldn’t be increased. On the contrary, it needs to go up enormously. However, that needs to be tempered by awareness that we do, in fact, have racism here in the police and justice system just like the rest of America. We also have a penalty system that doesn’t scale with income, so what’s a minor inconvenience for a middle-class family might be a crippling debt for a poor worker.

Enforcement increases must be done rationally and compassionately.

Less than 1/3 of PPB officers live within the city limits.

The problem is not ALL racial. There are many recent college graduates, behind on student loans, in the core of Portland working at minimum wage jobs that could be hired for traffic enforcement specifically. Yet PDX is not willing to hire them unless they are trained specifically for gang violence enforcement.
Hire the college grads, returning Vets, and then the homeless might be able to take the minmum wage jobs that are open.

I am quite certain that a large percentage of the black community would disagree with you on this matter. Portland certainly has plenty of problems with racism and profiling. Referring to fears of racism as “hysterical” does not make the problem go away and in fact, brushes off what is a legitimate issue.

Portland may not be Ferguson, MO, but that does not mean we are free from the same problems.

I’m a white man in Oregon, definition of privileged, and I fear every interaction with the police. Its not an irrational fear. Its well substantiated by evidence here in OR and across the US. That said, bring on some accountability for drivers!

“why isn’t anyone talking about this?” is such a great resource. thanks for mentioning them.

Let’s use lots more photo radar enforcement with a 5 mph buffer instead of a 10 mph buffer. And use lots more red light cameras. I’ve never detected a speed gun and a camera that discriminated on the basis of the ethnicity or gender of the operator.

By the way, I’ve never seen any reports of an enforcement action that reported on the color of the motorists who broke the law.

Use a 10% buffer at the law implies. A 10 MPH buffer is rediculous!
The spedometers on the road now are much better than 1916. So are the speeds.

Motorcyclists on sidewalks!? At least he is wearing a helmet, or Amanda would have a fit.

I would like to see more citizen involvement in these actions. What if we have citizens back-up officers with stopwatches timing a clearly marked interval of e.g. 50 yards in a 25mph zone = 4s. Then, wave down and ticket everybody who goes through in less than 4s. No exceptions.

They always seem to have a few DUII and other arrests with these, despite the warning signs, media broadcasts, and broad daylight. So what about the people they didn’t stop, or every other day?

Glad to see more action, but it barely scratches the surface.

My pleasure! I did it from here, here! 🙂

Except for cheesy enforcement of a stop sign on bikes. That is a complete waste of time.

I actually don’t agree with that… all the time. I got 242’ed at the stop sign on Flint and Broadway, where cyclists can come out of the “wiggle” from Vancouver to Broadway passing the city park. The cop was cool about it and explained that that particular stop sign is important because that intersection is especially deadly to cyclists, and he wasn’t lying. It taught me to be way more careful there… I think selective stop sign enforcement isn’t a bad idea really.

This is a great step, but I’d like to see unannounced traffic enforcement during peak and off-peak hours. I’d like to see these sort of things happen without all the advance notice to the media and with signage. I think it would do more to educate people than these targeted, pre-scheduled, pre-announced things.

Saw this on Facebook today. Look how easy it is for a cop on a bicycle to catch cell phone users.