Tucked into Nike’s exclusive $10 million bike share contract with the City of Portland is a clause that allows the company to put its considerable marketing prowess on display.

Nike has the right to place occasional “wraps” on 100 of the 1,000 Biketown bikes. This means they can change the color scheme of the usually bright orange machines in order to promote whatever they please. Today they announced their first wrap scheme.

When Biketown launches next week some of the bikes will echo the stylings of three historically significant Nike sneakers.

Here’s the announcement from Nike:

When the first verifiable bicycle made its debut in 1819, it was deemed a “running machine.” When the City of Portland Bike Share Program, BIKETOWN, launches July 19, this old moniker takes on new relevance, as 10% of the program’s bikes will feature a limited-edition bike-wrap design inspired by one of three beloved Nike sneakers: the Nike Air Max 95, Nike Air Trainer 1 and Nike Air Safari. And while only one of the silhouettes was explicitly designed for running, all were made to move.

The Air Trainer 1 and Air Safari, creations of the renowned Nike designer Tinker Hatfield, both released in 1987. The Air Trainer 1, famously worn by John McEnroe, redefined cross-training shoes, while the Air Safari has become a cult classic thanks to unmistakable print detailing on its toe and heel. Meanwhile, Sergio Lozano’s Air Max 95 broke new ground in 1995 with Nike’s first black midsole, forefoot air and its immediately recognizable gradient upper.

They also released the three different colorways along with the video. Behold, sneakerheads! 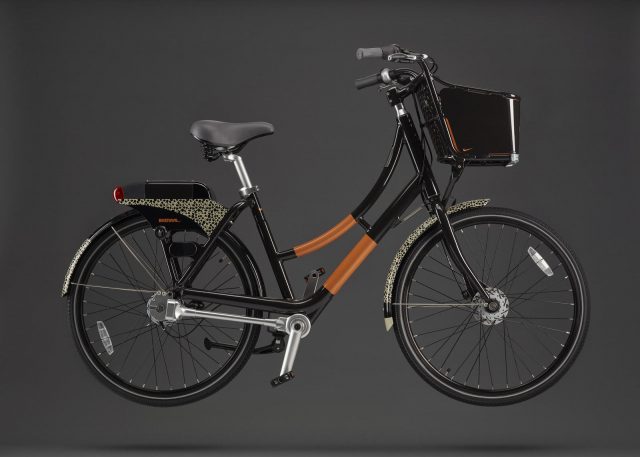 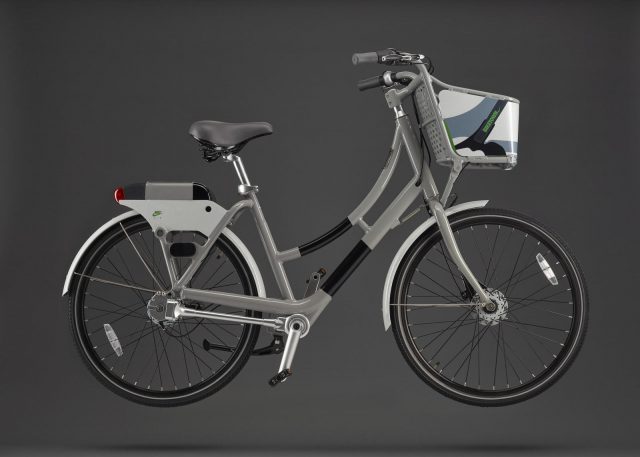 It will be interesting to see how Nike’s march into Portland neighborhoods is accepted by locals. After all this is a town famous for its disdain of global corporate juggernauts. There’s already this one person on SE Taylor and Cesar Chavez Blvd. who’s making his/her feelings widely known with signs that say, “Don’t Brand my Block!” and “Urban Blight” with an upside-down Nike swoosh. Check out these photos sent in by a reader: 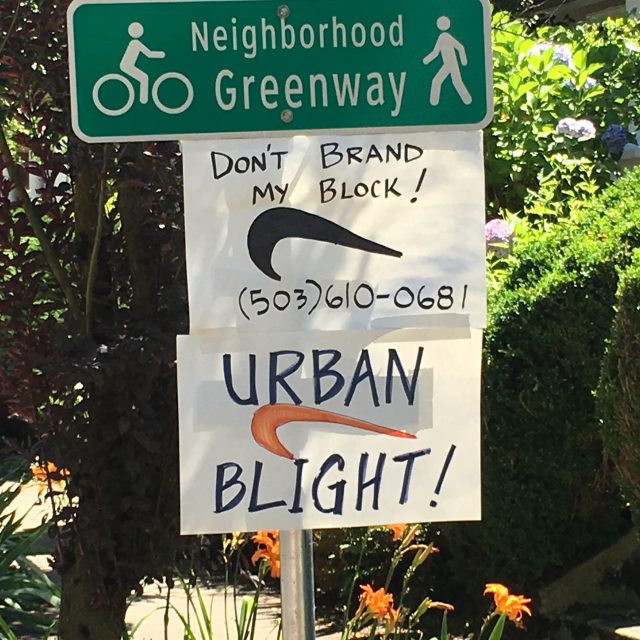 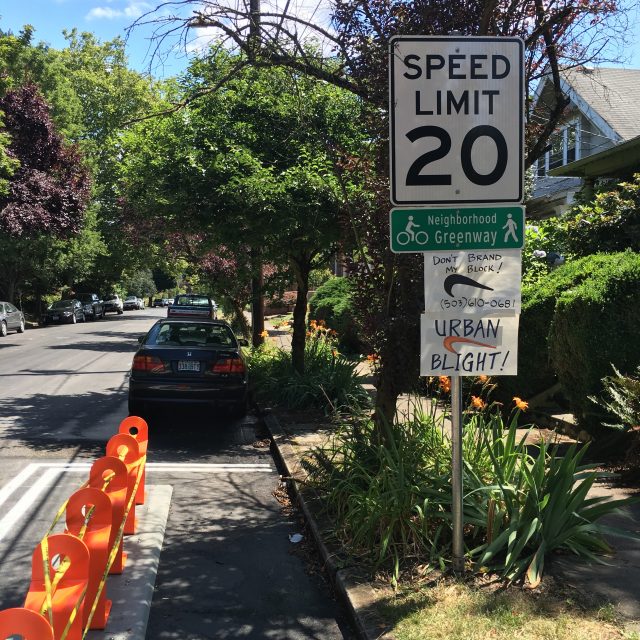 CORRECTION: This post originally used the old name of Cesar Chavez Blvd. We regret the error.

In the video they show some folks using the bikes at night. I see the rear light, but I don’t see a light in the front. Is this something they will have once the system launches?

Adam
Reply to  Chris I

The front light is built into the front basket. Look closely – it’s at the bottom.

Chris I
Reply to  Adam

But apparently are not turned on, or not working for the promo video? I hope they turn on automatically with a sensor, because a lot of people won’t figure out or will forget to turn them on.

mh
Reply to  Chris I

They’re supposed to be integral, built into the frame of the bike, and on all the time. I think it’s just the lighting of the video that made them unnoticeable.

I’ve never heard of any of those things, but thanks for the moneys. 😉

I guess that’s the point of advertising, huh?

Will they cost three times as much to ride? 😉

Chris I
Reply to  daisy

It is really hard to be enthusiastic by any branding they might do on our streets. Meh, thanks for the bike money but I still won’t buy your product.

I agree. I’m sick of all the Ford, Toyota, and Subaru branding on my street.

I was going to say the same thing.

Perfect I can count on all of you to vote for tax increases to fund all these things our government should be doing. Otherwise suck it up and enjoy the sponsorship.

I suppose you have to pick your best enemies. Sweatshops aside, they’re selling shoes (and ostensibly bikes). At lease they’re not Monsanto selling… Agent Orange… wait….

Monsanto no longer manufactures Agent Orange and haven’t for quite some time. Also, Nike no longer uses child labor.

Yet they are where they are today for doing such things.

As if Portland wants a giant Subaru warehouse in NW Portland like what Gresham is getting?

I want one that celebrates by waffle trainers!

Archeologists have unearthed the device and endeavored to recreate his secret recipe-even going so far as to affix waffles to their feet in a desperate effort to find his secret.

Not a huge fan of the Nike branding but I do find Bowerman’s (and Knight’s) story very endearing.

The Taylor/39th person is just upset about losing “their” parking space.

Many neighbors knew nothing about biketown until this one person got notice of the rack being installed in front of their rental duplex (without onsite parking) and started complaining. The pro-parking crowd suddenly became interested, with plenty of Fritz-like suggestions.

Plenty of questionable decisions being made in an effort to preserve on-street parking at/near influential businesses.

Those are some good-looking bikes!

Eric Leifsdad
Reply to  rachel b

I’m not a fan of marketing, but I love the idea of some random bikeshare bikes looking different. Don’t let drivers just get complacent when they don’t see orange. Everybody will get a slightly wider berth because of this.

“Unicorn” bike share bikes have been really popular in other cities. People seem to enjoy discovering them, posting them to social media, etc. Perhaps like a scavenger hunt?

Because Capitalism, people.
If you wanna piss and moan about the pursuit of filthy lucre on Nike’s part, then you have to piss and moan about the part every consumer plays in the equation. Unless you live on another planet or belong to a remote, as-yet-undiscovered tribe somewhere in the South pacific, you consume stuff. As in, you buy stuff. We all do. Because that’s the world.
If you don’t like Bikeshare, or Nike, that’s fine. Get your own bike, paint it any way you please, and wear bread bags on your feet and a tinfoil helmet.
But don’t get all huffy about Nike’s role in this, and by all means don’t park in their bikeshare spaces. It’s not like they’ll be absolutely everywhere.
And oh, hey — the point of this is that more people will ride bikes. Isn’t that a good thing?
Cheers and happy riding.

Remember when we were all thanking Nike for building a bike path to the MAX station?

rachel b
Reply to  Beth H

Adam
Reply to  rachel b

I’m guessing I won’t see you at the next Timbers match then. 🙂

rachel b
Reply to  Adam

Actually, no, you won’t! Nothing against the Timbers. 😉

Pay no attention to the man behind the curtain. Accept the status quo. Take your bread and circuses and stop complaining. Don’t try to make the world a better place. Love it or leave it. Rinse, wash, and repeat ad naseum until your brain is mush. Buy, buy, buy.

“…the point of this is that more people will ride bikes. …” beth h

Let’s hope so. Taylor and 39th/Chavez, is a long way from Downtown. Round about November, December, January, February, or any day when the temp is about 40 degrees, rain is coming down, and it’s the light level is low all day long, I’m interested in watching reports of people will be loyally riding these bikeshare biikes.

Use of public amenities for branding, and advertising private products and services is nearly standard practice anymore, and happens because the public doesn’t apparently care to pony up the bucks that would obviate the need for the revenue subsidy that comes from this use of public amenities.

The street clutter that bikeshare and its facilities present, is one of the system’s least appealing characteristics. The street clutter presented by parked motor vehicles is reasonable in comparison, because that mode of transportation is far more versatile to the wide range of people’s travel needs, than are bikes.

We’ll see though, how biketown sponsored bikeshare pans out. Nike is a good, high profile sponsor for Portland’s system. Some people will want to ride these bikes, or simply be astride one to try look ‘cool’, just because they’re Nike sponsored and gussied up according to Nike style formulas…even if they don’t actually like to ride bikes. That compulsion alone, should bring in some dollars. Any significant numbers of people willing to put up with the vagaries of weather here in Portland, to leave the comfy confines of their motor vehicle, to regularly ride a bikeshare bike instead, will be gravy.

To follow up with what wsbob has mentioned about weather and bikeshare.

I’m also curious how these bikes will hold up in the weather when just sitting out in the rain? Are there supposed to be covers over the park stations?

I was recently in Fargo, ND where they too have bikeshare and heavy winters, granted, a little different than ours, but the bikes were pretty thrashed. I don’t know what kind of maintenance program they’re under.

I imagine the crankshaft drive train is a design with heavy winter in mind.

Thank you! How many people are typing it on their Apple, Intel, AMD powered computer while they wear their prana, athleta, birkenstock, (you get the picture). Unless you all make your clothing from homespun oraganic cotton, from the sheep you raise in your backyard your “outrage” is a bit empty.

Even that cotton is bought as seeds from an agricultural company…

I forgot that these bikes were shaft drive. Anyone know how common non-chain drive bikes are in bikeshare programs around the world?

There was a halcyon time when it was just Civic Stadium. And they named arenas in honor of (for example) veterans, i.e. Memorial Coliseum. And corporate sponsors had the grace to NOT plaster their names/logos all over everything. What a thought!

Doh! This was supposed to go way up there under Matt’s and Adam’s comments. Doh!

Adam
Reply to  rachel b

I’m honestly not a huge fan of corporate sponsorship either, but I’ve learned to ignore it. It’s just one (of many) unfortunate consequences of our capitalistic society. In the mean time, we’ve somehow tricked a multi-national corporation to pay for our bike share program, so I’m happy about that.

rachel b
Reply to  Adam

Agh! I meant “I do my best to ignore it (the advertising) but I fail. !

The colors of rental bikes is so insignificant it should be beneath our notice. Shame on me for not only reading this post but commenting on it too.