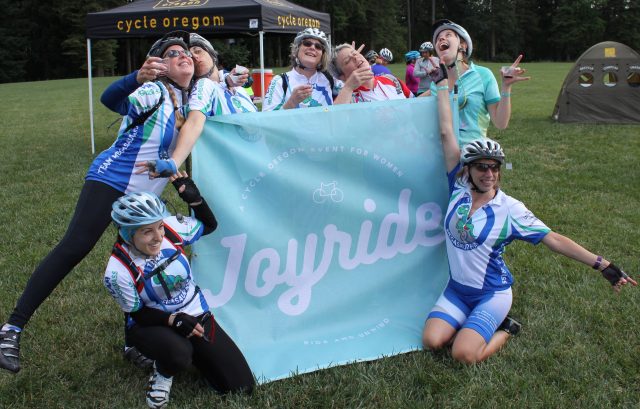 Maybe it was the wine?
(Photos: K.Laudermilk)

In April, Cycle Oregon’s Chris Knott e-mailed me asking if I would like to cover the first ever women’s only Cycle Oregon ride. At the time, he informed me that they had exceeded their original goal of 250 sign-ups and were at 620.

After visiting the ride’s website, I could tell why so many women were enticed. Wine tasting? All local catered lunch and rest stop snacks? Massage therapy and acupuncture? Yoga? Live music? Widmer beer? AND bike riding!? SOLD!

There were three routes to choose from. 17, 38, and 60 miles — all with rest stops that would exceed the expectations of the Queen of England and impeccable signage throughout each route. If you think for one second that any of these routes were lacking big hills, you’re mistaken. You see, ladies prefer their luxury with a side of excruciating physical feats.

You might be asking yourself, Why is it important to have a ride specifically for women? That was a question I had been asking myself the entire week leading up to the ride. It wasn’t up to me to answer that. Instead, I left that up to the numerous women that I met and spent time with on Saturday afternoon. 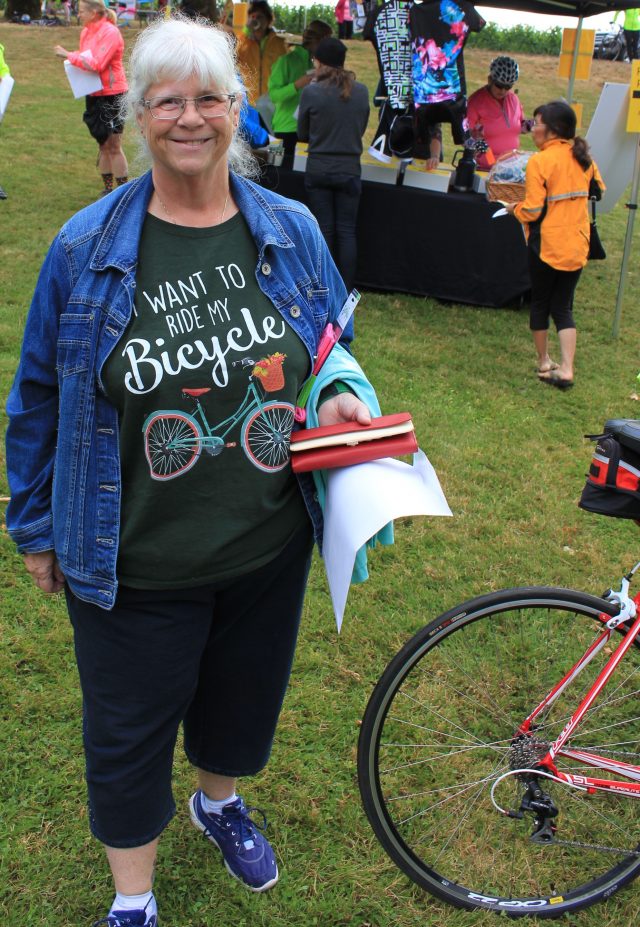 When I asked Val Larson what her relationship to bikes was she clasped her hands over her heart, closed her eyes, and said, with a breathless sigh, “I LOVE my bike.” This was Val’s first time participating in Cycle Oregon. When asked what made her want to sign up for the Joyride, she said that an all women’s ride sounded too fun to pass up. A lifetime bike commuter, she’s happily retired now and can ride her bike “just for the fun of it.” 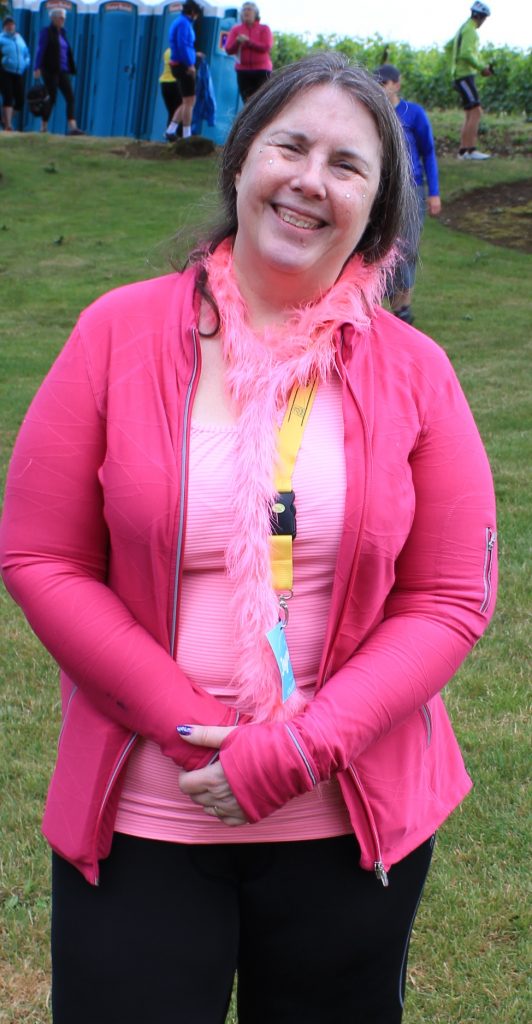 Maggie Hamilton is the kind of person you notice first in a room. Or, in my case, a field. She has an effervescent personality and a permanent smile across her face — not to mention a hot-pink wig that attaches to her helmet and actual sparkles near her eyes. I couldn’t NOT talk to Maggie.

In 1973, she started commuting by bike while working in Washington DC. “Nobody was doin’ that back then! Especially not women!” Maggie proudly stated. After years of dancing and riding her bike, two knee surgeries sadly left Maggie unable to participate fully in her passions. 2005 was the last time she regularly rode a bike.

At 62 years old, she’s been volunteering for Cycle Oregon for twelve years — claiming that, if they started an all women’s ride, she would participate as more than a volunteer. A deep giggle came pouring out as she told me that she thought the first Joyride would be in 2017, not THIS year. “I might fall over, but I’m gonna do it!” she said about the 17 mile ride ahead of her. “This is the first time I’ll be riding for pleasure since I was a kid.”

I have no doubt that Maggie conquered those 17 miles with inspirational vigor.

Literal harp music was playing over the speakers when I ran into (name-removed-by-request) and Shannon Sneed (right). I was ready to pack up my little reporter notebook and begin my 38 mile ride when I heard, “my vagina feels SO supported here.”

I spun around and asked Shannon if I could put that on the record because it made me laugh so hard. Maybe it was the harp music, or the yoga that was going on at that moment, but things were starting to feel a little TOO civilized. We just had to laugh. “Would a men’s only ride feel differently from this?” we all wondered aloud.

Kari and Shannon are the kind of women that I seek out as friends. They’re strong, hilarious, and powerful women. “In all seriousness, this is a really historic week for women!” Shannon said. We all agreed that Hillary Clinton, who had just clinched the Democratic Party nomination, would probably love this ride.

Both Kari and Shannon are moms. “I thought, wine and no kids?! I’m there!” Kari said about her motivation for signing up. However, it seemed like riding her bike meant a great deal more to her than merely getting an afternoon to herself.

After childbirth, Kari shared with me that she suffered some more than uncomfortable physical complications that left her feeling unable to do the kind of riding she had done before kids. She had trained and raced regularly, worked at Bike Gallery for years — riding her bike was a part of who she was. She described to me how the bike she rode before having a baby just didn’t suit her anymore. She wasn’t comfortable on it.

Skip to Kari’s new bike and new relationship to riding. She described a bike ride she recently took on her new steed. The weather was awful, the hills were hard, but, when she got to the top she described how she literally screamed out in triumph. “It was good to be back,” she said with a reminiscent smile across her face. “Riding my bike is like being in a container of my own space,” she described. Shannon jumped in describing riding her bike as a way to “serve herself.” I’m always in awe of how powerful a bike can be.

It was overwhelming how many women shared with me that they would participate in more group rides if they were all more like the Joyride. Laurie Roland, bike riding badass and bride to be, stated “I hope that my friends and I start doing rides like this more often!” I overheard another woman in Laurie’s group say “I’m going to do this again next year! This has been a hoot!” 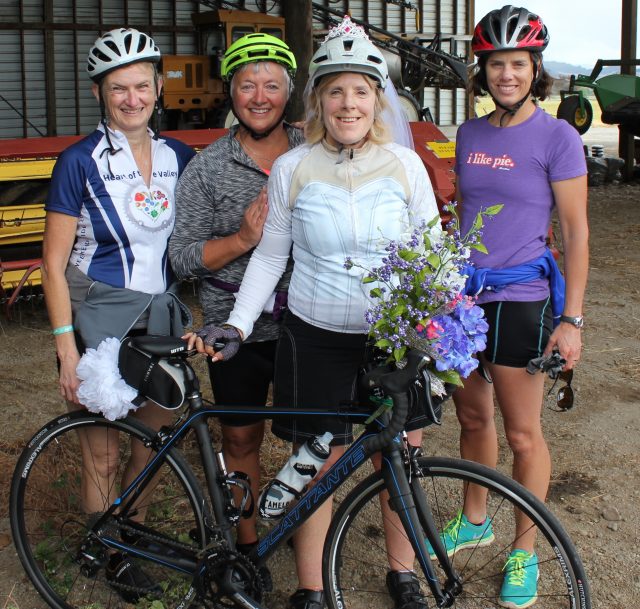 The whole event had such a positive vibe. Everyone seemed to be having the time of their lives. There was no shortage of laughter and chatting. Not a competitive edge in sight. 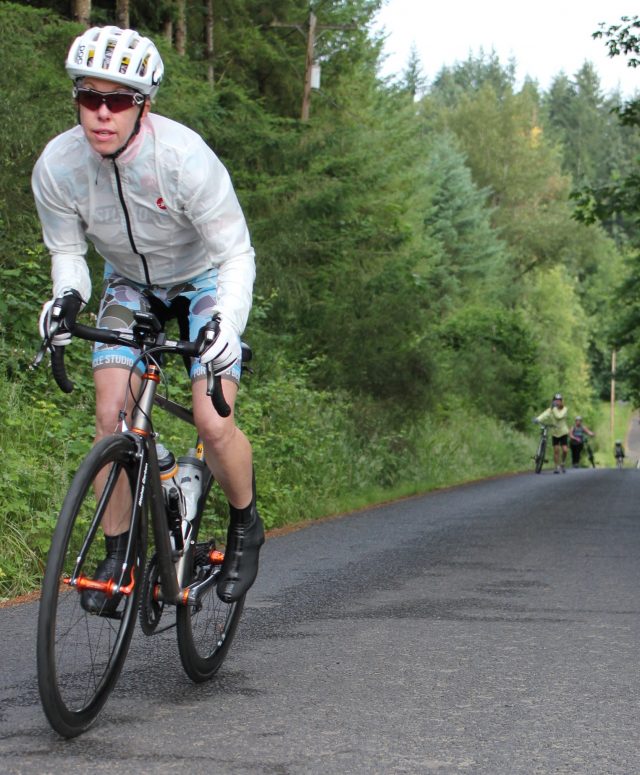 Ride or walk — it doesn’t matter! Just get up that hill! 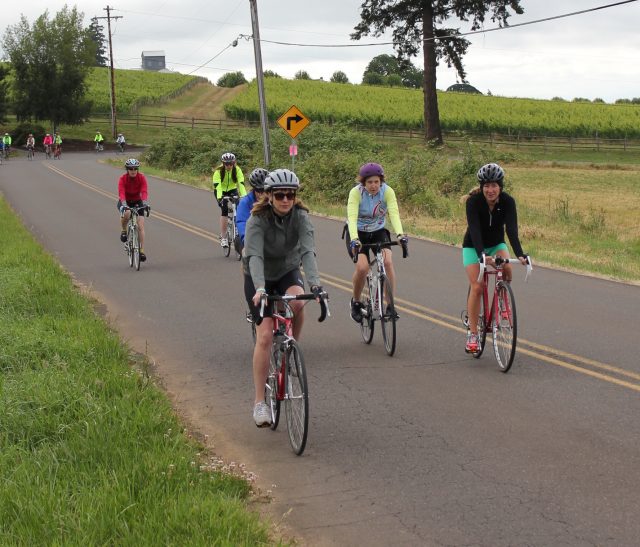 Every time I pulled over to take photos I was met with no fewer than five individuals asking me if I needed anything — was I ok? I felt very supported, just like Shannon said. 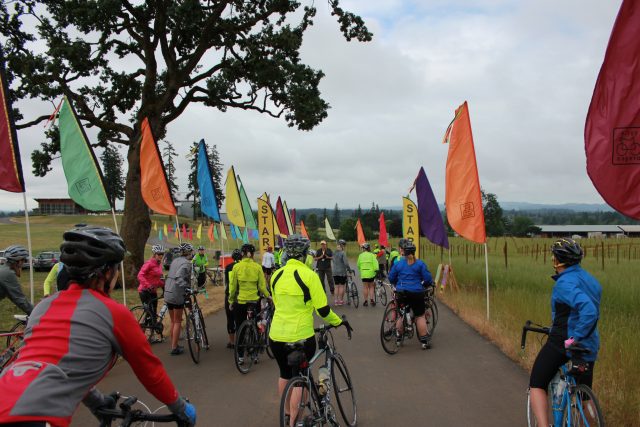 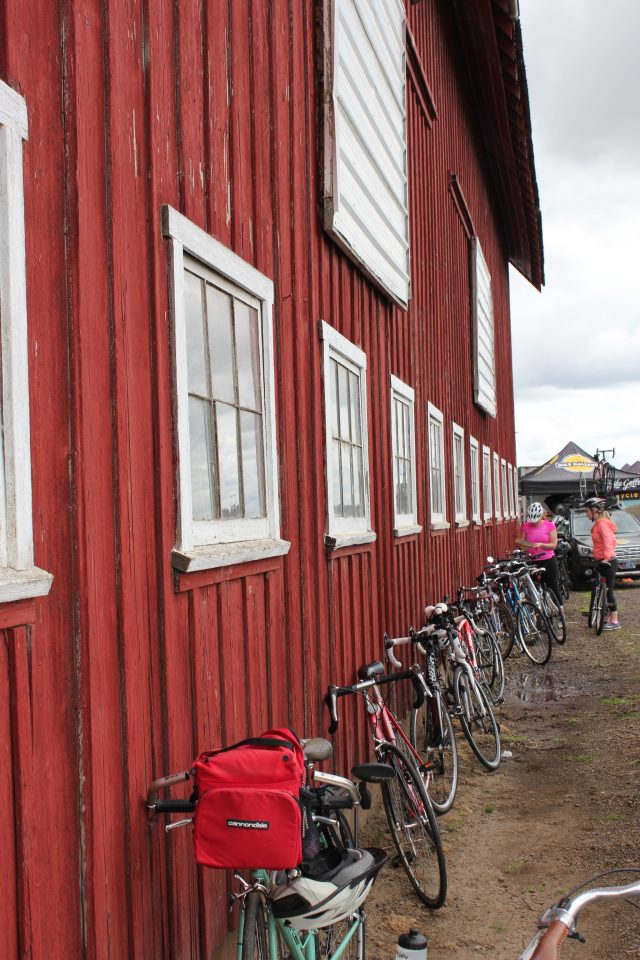 Rest stop number two. A mechanic from Bike Gallery adjusted my gears as I stuffed my face with cheese and hazelnuts.

Would I recommend Joyride to other women? Absolutely! Heck, we should do this more often!

So why is it important to have a all women’s ride? I’m still not sure. All I know is that, though I ventured into this ride completely alone, I felt far from it. As Maggie so perfectly put it, “we’re all just ordinary people that come in all shapes and sizes. We can all feel comfortable here.” Amen, sister friend.

— Gal by Bike is an occasional column about life and bicycles by Portlander Kate Laudermilk.

BikePortland is supported by readers like you. Please become a subscriber today!

And it worked. The government made a ton of money on the payback.

Perfect, profit is all that really matters in the end, right?

Hm. The test of whether something is worth prioritizing is making a profit?

And American workers in the auto industry and their suppliers and people in the towns that had manufacturing plants kept their jobs, paid their mortgages, were able to keep their kids in school, and ….

Oh, I know lots of people on this forum hate everything that has anything to do with automobiles, but criticizing Hillary Clinton for her support of the “auto bailout” in response to a celebratory article about women using and enjoying riding bicycles is pretty ridiculous.

Ok, I think perspectives have now been heard on this. Can we leave it there, please?

I think you should delete the initial comment, as it has absolutely nothing to do with this article.

CaptainKarma
Reply to  Chris I

I do not want to hear about these presidential candidates on a site where we go to share the joy of riding. Not good.

That looks like it was a blast! Great article as usual, Kate!

I asked about volunteering the night the ride was announced. It was fun to help and to stay in the background. Aside from about two minutes of rain, it was a great day!

This sounded awesome, I’m definitely going to keep my eyes peeled for sign-ups for next year!

Very cool! I’d love to do it next year. And great write up, Kate.

The best part was that there weren’t men peeing all over the port-a-johns. 😉

You had me at “cheese and hazelnuts”!! This ride sounds amazing.

Are my travels leaving me muddle-headed, or did that article pretty much say nothing other than it was a great ride, at least in the opinion of the author and the few people she quoted.

I feel like I missed something, but perhaps there is no civil way to put a dislike of a certain gender into words.

I thoroughly enjoyed the ride. My friends and I heard from many women how this was their first organized ride and often the longest distance they’ve done by bike. No where was there a “dislike of a certain gender”. This ride aimed to provide a fun day riding bikes for woman and it succeeded.