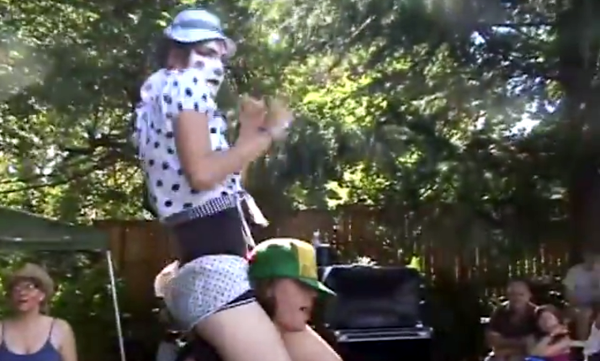 The Portland coverage starts about one minute in, after the show’s opening montage. Clarence documents Timo Forsberg’s marriage to his bicycle; talks to artist Carye Bye about the definition of the unfamiliar word “bikey”; shows a performance of the Sprockettes; and more.

After Eckerson’s visit to the Bike Fair, he takes a trip to Seattle to talk to (current Portland-area resident) Todd Boulanger about bike parking, then hops back to Portland for a somewhat experimental sequence featuring Ken Southerland’s driveway and then joins Shawn Granton for a bike tour of classic east-side theaters.

As this year’s Pedalpalooza ramps up, it’s a window into a past when the festival was a little smaller and a little looser. Here’s to a city that will continue to change and discover new things about its future and its past.

That was an amazing summer for Portland and bikes -so many fond memories. Thanks for the video!

Awesome. Thanks for posting.

Fun to watch, fun to remember! Thanks Clarence and Bike Portland. The adventure continues..!

This was the first summer i missed in Portland. Feels great to see some highlights I missed.

Especially love love love the Urban Adventure League and our old theaters. Ive got a favorite movie experience in each of those (except the Baghdad, where my fav experience is actually my least favorite movie, walking out of “What the #@%@ Do We Know?”

Thanks for the memories! 2005 seems so long ago now. Pedalpalooza was a smaller thing, where you’d probably run into the same group of folks at every event you went to. The “huge” rides then were what? 100 people? And that would probably be just the Kickoff Ride.

What fun bikey days in 2005! I was on that Theater History Ride – I’m the one who saw Logan’s Run twice in one evening.

I now live in Stevens Point, a small city in central Wisconsin, but I haven’t left the Bike Fun I grew to love in Portland behind. I just started my 5th season creating Bike Fun through Poky Pedaling Stevens Point. Shawn and his Urban Adventure League is a prime inspiration for what I do here.

I don’t put on a Theater History Ride – we don’t have enough old theaters here. But I have put on several local-history-themed Bike Fun events modeled after these types of Urban Adventure League rides. The accompanying stories about our city’s past are always well received by those who grew up around here.

We have another Poky Pedaling Potluck Picnic coming up in two days, modeled after Shawn’s Pedal Potluck Picnics. My Tiny Museum Ride in a few weeks – I’ve had two others in past years – is a complete ripoff of the excellent version that Carrie Bye put together back in those days.

To all these Bike Funnists and all others either still in Portland or who have dispersed to other locations just as I have, I just thought you’d like to learn how your influence has spread.

Until this BP post, I had no idea that the BikeTV guy on that Theater History Ride was growing into the driving force behind Streetsfilms. Wow. And his video of scenes from the 2005 Multnomah County Bike Fair brings back more Bike Fun memories.

Thanks to Clarence Eckerson for making his BikeTV video available to BP. And thanks to BP for sharing it with us.

Thanks for the compliments, Bob! 🙂 Glad to see you brought some PDX bike fun out to Wisconsin! If I ever get through that area, I’ll drop by!

<3 Poky Pedaling to Tiny Museums — Huzzah to Bike Fun in Wisconsin. Thanks for spreaking the.. uh Bikey Museum Love.