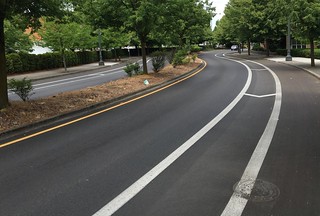 Portland’s infrastructure still has a long way to go before cycling appeals to as many people as walking, taking transit or driving; but it’s moving in the right direction.

The way to get there is not a mystery: We need more roadway space dedicated solely to cycling with lanes that are physically separated and protected from motorized traffic. And each segment of protected bikeway we add makes the entire network exponentially better.

With two Better Block projects running simultaneously last week I realized I could hit both of them on my way home. As I did the ride it occured to me that my route would be full of bikeways that are protected from cars and trucks in some form or another. In fact by the time I got home I’d spent the vast majority of my time on bike lanes or paths that are a step (or two) above the standard, door-zone bike lanes that dominate most cities, including Portland.

Our office is on SW 4th between Stark and Oak and I live up near Peninsula Park in the Piedmont neighborhood of north Portland. Below is the route I took with the little detour to check out the Better Broadway project (which is now over, sadly):

From my office I hopped on SW Stark, which is part of a key east-west cycling couplet with Oak. In 2009 the Portland Bureau of Transportation (PBOT) dedicated one of the two traffic lanes for cycling and then three years later painted the entire lane green. From Stark I connected to Naito Parkway which is in the midst of a three-month transformation where half of the northbound roadway space has been devoted to cycling and walking. 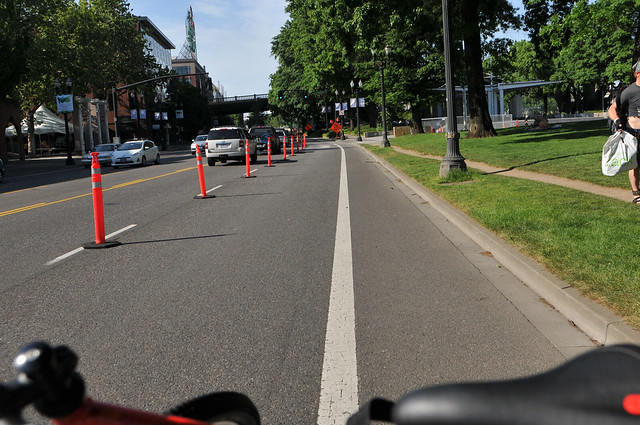 From Naito I jumped up onto the multi-use path in Waterfront Park, across the Willamette on the lower-deck of the Steel Bridge, and up the ramps of the path to the bike-signal on the corner of NE Lloyd and Oregon. From there it was a quick jump through the bike-only lanes in the Rose Quarter Transit Center where I connected to the protected bike lane on NE Multnomah. 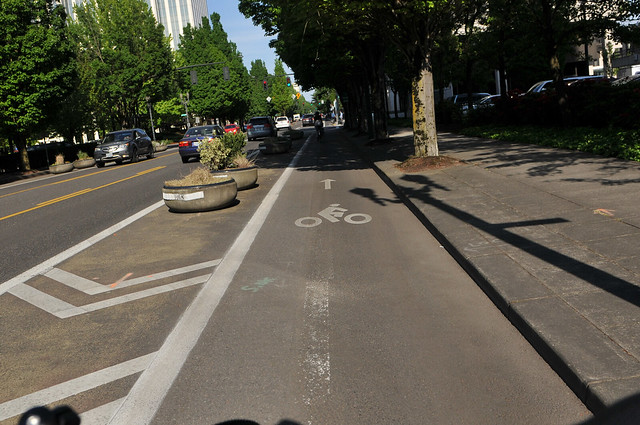 I took the Multnomah bikeway to NE 16th where PBOT has recently added buffered bike lanes. 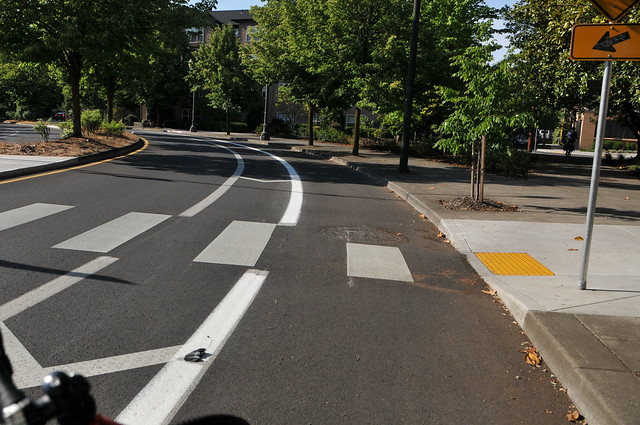 Imagine how much better this would be with some of those Tuff Curbs PBOT just installed on SW 13th at Clay.

Once on Broadway I thoroughly enjoyed the citizen-backed transformation of the street. I biked with plenty of breathing room. On my left parked cars created a nice buffer from auto traffic and on my right I could window shop. It was so relaxing compared to how this stretch of Broadway normally feels. Not only was there more room for biking, the people who were using cars were going much slower than usual. 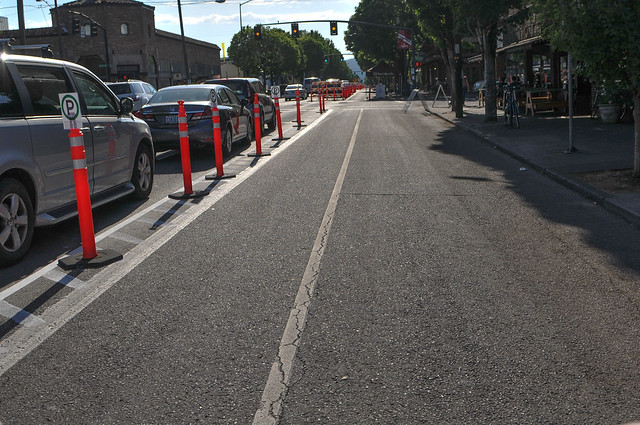 As I continued west and the Better Broadway project ended I was back on the gauntlet of stressful riding in a door-zone bike lane on a fast arterial between NE 11th and Williams. Then on Williams I was once again able to ride on a street that had been dramatically reconfigured recently to have more space for cycling and slower automobiling speeds. 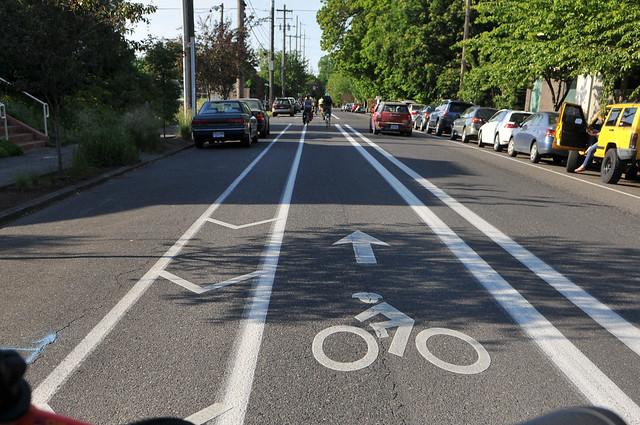 North of Killingsworth I took quiet neighborhood streets to Rosa Parks Way. Rosa Parks still only has a standard, door-zone bike lane but it’s better than nothing, and that’s what it used to have.

It’s easy to pick apart these bike lanes and criticize their inadequacies. All of them have sections where the design has been compromised for myriad reasons. They all need some combination of more physical separation and width and they need to be seamlessly connected to each other with safe crossings, more signal priority, and so on. Most of us agree on that. But in this post I just wanted to give you a glimpse of what’s possible. As we add segments of protected bike lanes like Better Block did on Naito and Broadway, and we add it to the smart improvements PBOT has already made in key sections, it’s amazing how a complete and safe bike network suddenly emerges right before our eyes. The foundation has been built. We just need to keep building on it (and install a lot more of those Tuff Curbs) and we’ll find out that going from good to great is right within our grasp.

It’s easy to pick apart these bike lanes and criticize their inadequacies. All of them have sections where the design has been compromised for myriad reasons. They all need some combination of more physical separation and width and they need to be seamlessly connected to each other with safe crossings, more signal priority, and so on. Most of us agree on that.

I was going to say this, but looks like you beat me to it. Thanks for saving me a snarky comment. 😉

I love the City’s (and PBoT traffic engineers) embrace of these separated bikeways…please do more…though this type of facility needs a little more help to be an all-weather-all-hours transportation facility…how about adding a few reflectorised RPMs at each chevron…if there is no vertical wand / candle or hedgehog. Once winter hits and leaves are on the ground it can be tough to see the lines as they fade during the darkness.

A sand-filled jersey barrier or two at each crosswalk or apex would cost something like $1000/mile?

really?
how many per corner, 4? Here’s one site that lists the price at $290 for each water filled version:
https://www.trafficsafetystore.com/traffic-barricades/jersey-style-light#JSS 100 WHT
So if you wanted to only barricade in the first and last 6 feet on the main road, you’re nearing $1200 per intersection.
If the major intersections are every 1/4 mile, that’s $4,500 per mile, only to barricade the first and last 6 feet only on the mainline. If you want to provide protection at every intersection, Portland spaces intersections about 250 feet apart.

Awesome post. I’d be really curious to see a map of greater Portland and see how much purple is on it.

The worst parts of my rides are the roads with bike lanes. Granted, none of them are buffered lanes.

“better than nothing” is not true for me.

Totally agree. The door-zone bike lanes in front of my house are useless to me, and I typically opt for the street a block over whenever I can. And these bike lanes went in last year even, so they’re up to date with current city standards.

Door-zone lanes are useful for passing stopped traffic (not much else, unless you’re on the other side of the door.)

They’re also useful for “getting bikes out of the way of cars”, in fact that’s the only reason they were invented, as they serve no purpose to the person riding the bike.

Door-zone bike lanes are bad, but I find myself preferring segregated space whenever possible. I hate having to keep looking back to see if a motorist is creeping up behind on greenways or other local streets, especially on uphill portions, because sometimes I know I’m about to get subjected to an unsafe passing maneuver. I’d rather just have my own space when I’m clearly slower than prevailing vehicle traffic (and this is why I hate riding on faster 2-lane streets like SE 20th and 28th). Kind of a shame to feel this way when greenways are what the city hangs their hat on.

Can we get a tally of the amount of separated bike lanes Better Block have put in over last 2 weeks vs PBOT over the last 4 years?

last 4 years seems like a convenient date range, and what is defined by ‘separated’, buffer, raised?

Provide a definition of ‘separated’.

This was one thing I noticed when I came back to Portland after being in Copenhagen. For all the missteps, we do have good bones here, at least in many parts of inner Portland. Its really frustrating because, relatively speaking, what takes that infrastructure from what it is now and to the real 8-80 facilities you might find in Amsterdam, etc. is really not a tall order but its simply never prioritized or funded. Everyone seems to think that we can just keep calling ourselves the best because of policies that were pushed through in the 70s without ever proposing anything bold and new. The Hales administration should be ashamed IMO.

NE 16th & Multnomah is a really unpleasant place to make left turns. If the city ever gets round to upgrading the Multnomah bike lanes to a permanent design, that would be a great location to trial a protected intersection treatment.

This was an amazing post, Jonathan! It really does paint a vivid picture of what is possible, and it gives us some hope! I hope that EVERYONE in City Council, PBOT, Metro, etc reads this post! Perhaps a world-class connected SAFE cycling network really is possible sooner than we thought!