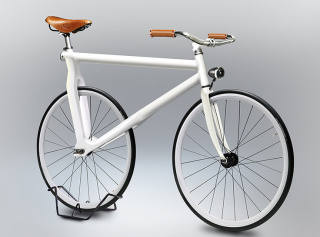 What one bike sketch would look like if it were real.
(Image: gianlucagimini.it)

This week’s Monday Roundup is sponsored by Green Zebra Grocery, celebrating the grand opening of their new store in the Lloyd District (808 NE Multnomah) on April 21st!

Funny bikes: A designer asked dozens of people to draw bicycles from memory, then created 3-D renderings of the sometimes pretty creative designes they offered.

“Textalyzer”: A New York State bill would let police easily check phone records to see if someone was texting before a crash.

Ikea bike: Look out, world. It’s priced at $797 and arrives in August.

Mandatory exercise: When the autocratic nation of Turkmenistan declares bike to work month, it doesn’t mess around.

Anti-distraction option: Smartphones have an “airplane mode,” so why not a “driving mode”? Former Apple employee William Henderson tells the story of what happened when he suggested one.

Infrastructure crunch: Though it was “once at the heart of American public policy,” the United States is now making no net investment in infrastructure after you account for depreciation.

Declining fatalities: In Europe, too, they’ve been falling much faster among people driving than among people biking.

Death counts: Vermont is the latest state posting the year’s traffic fatality counts on signs over its highways.

Death exposure: Drunk drivers in Thailand are getting sentenced to work in morgues.

Housing shortage: Los Angeles and San Francisco are considering amnesty for “bootlegged” apartments that have been operating without permits.

Drunk biking: Like drunk driving, it’s dangerous, though mostly just to people who do it. 15 percent of people injured in bike crashes had been drinking.

Fake gear: BikeBiz.com has collected all its coverage of knockoff bikes and accessories.

Against cars: CityLab goes big and broad. “In almost every way imaginable, the car, as it is deployed and used today, is insane.”

Dismissing features as “paternalistic” doesn’t sound like the company that created an extremely restrictive App Store and for 30 years would only let you resize a desktop window in the lower right corner. Change to the latter alone made it a Day One upgrade when it came out.

And I really don’t know how “Everyone Plays a Part in Chainsaw Safety” didn’t make it here. http://dearestdistrict5.blogspot.com/2016/04/everyone-plays-part-in-chainsaw-safety.html

Excellent article. If we could just paint some pathways for the non-chainsaw-wielding losers to use, then everything would be fine. Those people will need to pay licensing & registration, of course, to cover the additional cost of that paint.

I wonder about the Apple Airplane/Driving mode… Is there an App for that? I wonder how many people would voluntarily download that and use it if it were available?

Parents would buy it and load it into their kids phone if they used their car for dates.

The Article by Marriage has some solid points. As primarily a road cyclist myself I am guilty of treating nearly every moment on a bike as a competitive moment that requires concentrated effort. This is great for road rides and sometimes just practical for getting home quicker on my commutes but having a child recently and getting a bike trailer to take him on weekend cruises with my wife has helped shift my perspective.

I hope to do more adventurous touring and bike camping in this next season in life but for me personally I find the most joy in cycling from simply pushing myself and giving hard efforts (and following the pro scene to see other feats of physical punishment). For some this can be a shallow outlook towards cycling as Tom brings up but I feel there will always be a place for the “Velominati” mindset and that if the masses are infringing on adventure cycling then perhaps the culture of die hard road cyclists is being watered down as well… Great now I sound like a Portlander complaining about Californians.

Like everything in life people will flock towards popular trends. As my perspective towards cycling is slowing shifting from a source of competition and exercise towards a lifestyle and source of adventure / sustainability I hope the public does so as well. This will only happen in a large way the more people ride so we’ll have to take the good with the bad I’m afraid.

Let your image as a cyclist be crafted by the riding you do, not what the mainstream trends of the sport are doing. I have a feeling the adventure / touring cyclist will always be considered “hippies and explorers” even by the general cycling public.

I’d like to suggest you try to push yourself in a different way. Go rent an unassisted longjohn cargo bike from Clever Cycles or Splendid Cycles, load it up with baby and all it’s gear and maybe some groceries too. Then haul all that up Harrison or Salmon or — what the heck! — the Alameda Ridge. There’s personal challenge to be found in family biking too.

Re: . . .Buses: It’s not the bus drivers that are distracted, as the title suggests.

As cycling’s popularity has increased, there has been a cultural shift away from fun and experiences towards a macho world of speed and Strava

I guess transportation cycling is so square and uncommon that it did not bear mention.

They’re less and less likely to talk about the joy of cycling. Again, it bores the shit out of me.

I have a confession to make.
I find cycling boring..

And when I find cycling non-boring it is almost always a consequence of something unrelated to cycling (e.g. people or scenery).

IMO, those who argue that cycling should be joyous, meditative, fun, or some sort of flipping transcendental experience are the flip-side of the same “lycra and strava” bike subculture coin.

You’re doing it wrong. All of it apparently 😉

And for the record, chasing a strava KOM is not boring either.

from The Atlantic: The Absurd Primacy of the Automobile in American Life.

Maybe this was in a previous roundup but it’s worth repeating.

Same article as above.

Speed limits have recently been lowered to 30 mph over much of Burnside, hope it helps vulnerable users.

re: “Textalyzer” … we need this yesterday. As far as I know, every state recognizes driving as a privilege and not a right, and consequently has an Implied Consent law on the books. If you get behind the wheel, you automatically are considered to have given consent to have your body searched for alcohol if you are pulled over with probable cause.

I’m as civil-libertarian as almost anyone, but I support Implied Consent laws. We now know texting is as dangerous as drunk driving. If the human body can be searched for evidence of intoxication, than we can bloody well hand over our sacrosanct telephones if we’re pulled over for suspicion of texting.

By the way, the texting problem is wayyy worse here in Minnesota than in Oregon and Washington. I think the main reason is that like nearly 40 of the states, Minnesota lacks a ban on the use of handheld phones while driving, so people use their phones a LOT more openly while driving than they do in states where handheld use is illegal. As everywhere, the cops lack an Implied Consent law, so they’re working hard to figure out the best way to catch drivers in the act and document it so it can be proven in court:

The fact that you were involved in an accident is evidence that you probably weren’t paying attention.

That we need a mitigating factor only serves to prove that we do not expect any base level of responsibility from motorists.

X person has a wreck. Now, we have to decide if we want to try to screw them by looking for evidence of wrongdoing. White housewife… Nah, she can go on. Smart-mouthed teen? Oh, we definitely need a phone check and a sobriety check on them. Unless they’re driving a really expensive car, in which case their dad will probably have my job. Sure, we tell ourselves that we’re trying to make the roads safer, but every single attempt to do so is a subjective call by the officer, the DA and the judge.

My position is that the wreck is the evidence. Everything else automatically excuses the wreck and relies on subjective judgement to determine fault, blame and punishment. It’s simply not working.

Interesting point. Real safety improvements often take this approach. Any crash is identified as a need for improvement, not just blame. All airplane crashes are investigated to help prevent the next crash, not just assign blame. UPS takes a similar approach with their trucks and drivers.

I’m not sure I understand what you are saying…what is it that is not working?

The sun got in my eyes. I didn’t see him. She came out of nowhere.

Oh wait, that’s the stuff that is working…

Did I mention it’s worth repeating? Next week, I’ll just have Jim Lee read all the articles to me. Reading is hard.

Regarding the IKEA bike, “Look out, world” is correct. Carries a trailer but only one disc brake in front.

Are you basing this off actual spec info or just from glancing over the 3d rendered image? It could just as easily be assumed that there’s a drum brake in the rear hub..

I stand corrected: There is indeed a rear drum brake (http://www.telegraph.co.uk/men/recreational-cycling/ikea-to-launch-their-first-bicycle–and-yes-its-flat-pack/). Thanks for the suggestion!