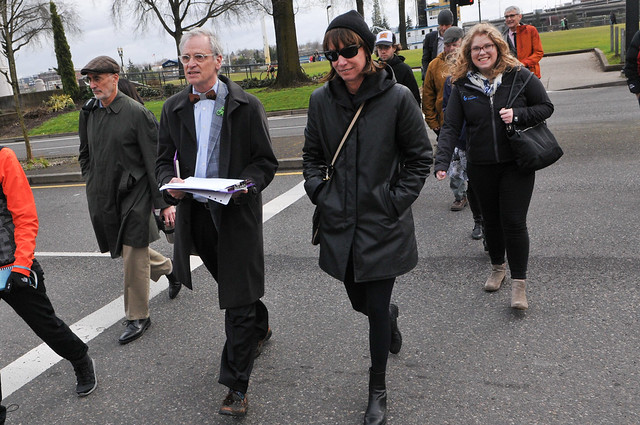 Former New York City transportation chief Janette Sadik-Khan has made the most of her few days in Portland this week. She’s done two official events (a talk at the Mission Theater we reported on Wednesday and an event at Powell’s Books yesterday) and two unofficial events (a media training with Portland Bureau of Transportation and Metro staff and at least one happy hour gathering).

Then on Thursday morning Sadik-Khan and her “Streetfight” co-author Seth Solomonow joined U.S. Congressman Earl Blumenauer and a handful of local advocates and transportation experts for a tour of Portland.

I tagged along with my camera to eavesdrop on the conversations (when appropriate of course) and to chat with Sadik-Khan and Blumenauer a bit. 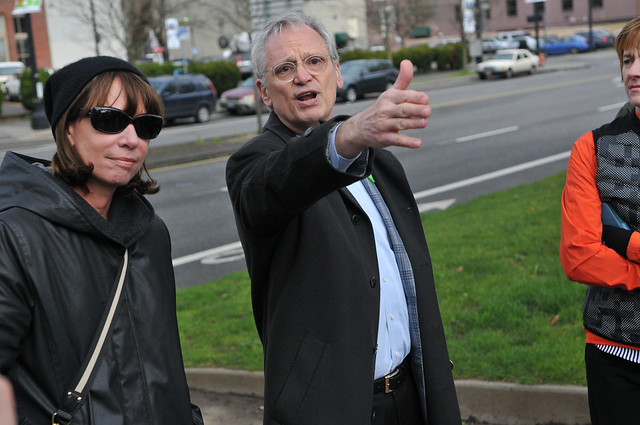 At our first stop in Waterfront Park, Blumenauer told Sadik-Khan the story about how Harbor Drive once roared through the green grass where we stood (it was torn down in 1974) and how our region rallied to defeat the once-planned Mt. Hood Freeway. Sadik-Khan then heard of more modern activism with a summary of the “Better Naito” demonstration project from Ryan Hashagen of Better Block PDX.

Once Hashagen described how the project created a temporary protected lane for walking and biking and how it had widespread support from the City and others, Sadik-Khan’s immediately asked: “So. What’s the process moving forward?” (which I heard as, “Why the hell isn’t this permanent yet?!”). That question elicited a very awkward look from two Better Block volunteers who quickly turned their gaze to Timur Ender with PBOT Commissioner Steve Novick’s office. Ender said, “That [the future of Better Naito] is confidential,” and then described how the project will return this summer. 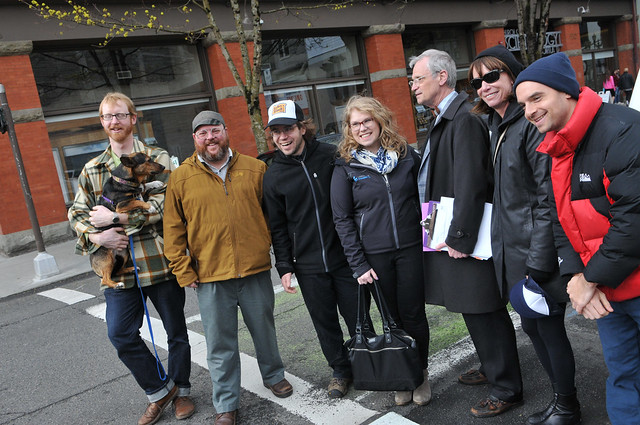 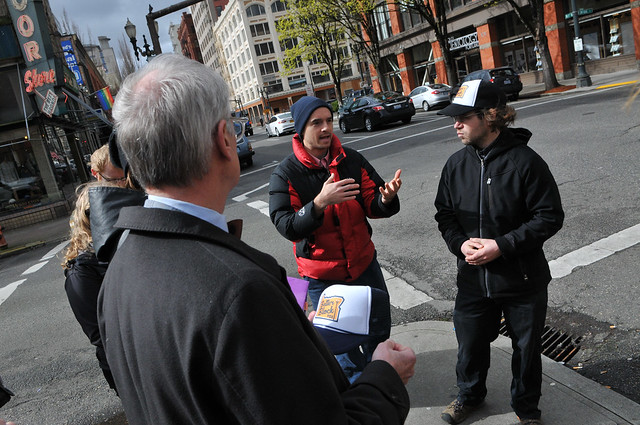 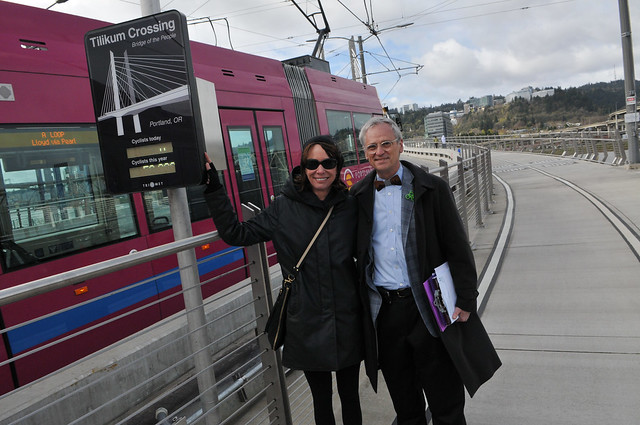 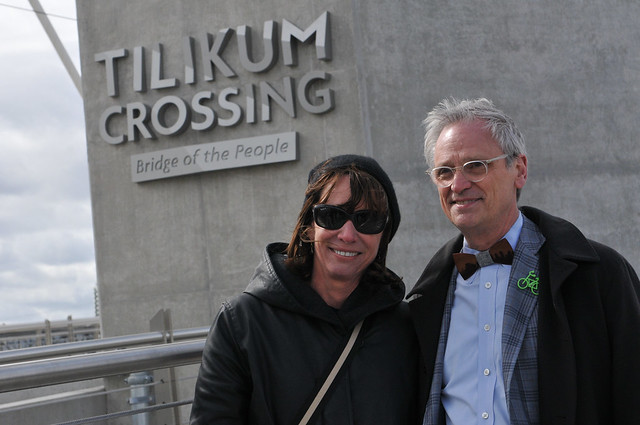 The streetcar, the bridge, the Tilikum itself: It was a very proud moment for Blumenauer to walk Sadik-Khan over the bridge. “It’s a symbol of 30 years of work,” he said. 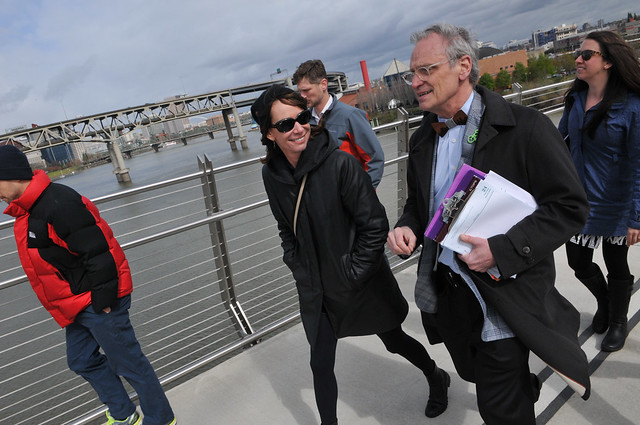 And for Sadik-Khan, finally walking over the Tilikum was like being a kid on Christmas morning.

As we made our way to the transit mall to catch a MAX train across the Tilikum Bridge, Sadik-Khan and Blumenauer walked together and almost never stopped talking. At the east end of the Tilikum Sadik-Khan seemed positively giddy to finally walk across America’s only major bridge to not provide access for private automobiles.

In South Waterfront Sadik-Khan met Dan Bower, the head of Portland Streetcar, and begged him to share insights that she could take to other places. She also met the proprietor of the Go By Bike bike valet near the Aerial Tram, Kiel Johnson. 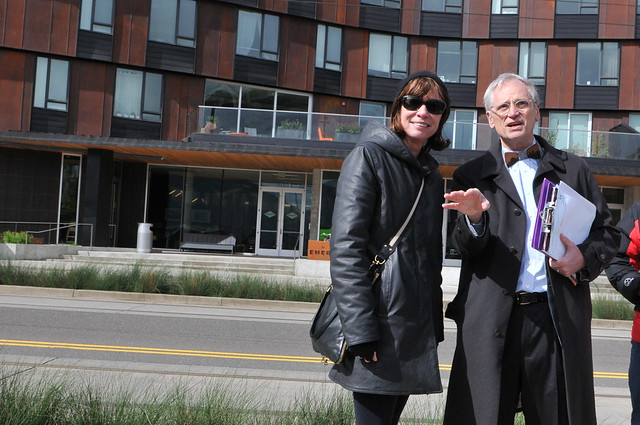 In South Waterfront, Blumenauer told Sadik-Khan about how this once industrial land is quickly turning into a hotspot for developers. 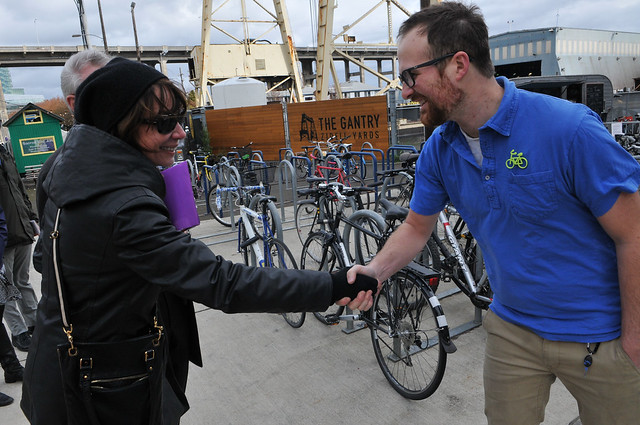 One urban entrepreneur meets another. In many ways Sadik-Khan and Kiel Johnson of Go By Bike are very similar. They both think creatively about urban problems and have the moxie to implement innovative solutions to them.

Sadik-Khan and Blumenauer are deservedly hailed as major figures in the transportation reform world, and it turns out they have a wonderful rapport. There’s a very clear sense of mutual respect between them — at least that’s how it appears to me.

In Blumenauer, Sadik-Khan sees someone who represents a city that pioneered many of the urban design principles she so strongly believes in (in her book she writes about being influenced by Jane Jacobs). In Sadik-Khan, Blumenauer sees a dynamic force who has helped push many of his most beloved issues — cycling, transit and “livability” — into the forefront of our national transportation conversation. Blumenauer spoke effusively about Sadik-Khan’s impact and one point said in his typically earnest way, “Reading her book just makes me smile.”

I saw JSK and Earl at Powell’s last night. What a great pair of transportation leaders!

I especially appreciate your editorial asides, Jonathan. I, too, wonder why the hell the Better Naito project isn’t moving forward yet.

Same here. I spent a few minutes browsing her opening chapters. I think it’ll be a worthwhile read.

Big businesses and utilities along the waterfront, including PGE, complained a lot for the Naito closure. Too much of a delay getting into the city owned parking garages. Confidential cause only the ‘right’ people are at the table right now discussing. What’s there to discuss? Shut it down for summer and see the tourism dollars float local small businesses.

I wonder what Janette thought of our complete lack of bicycle infrastructure downtown.

While I don’t think much of our downtown infra (especially its lack of connectivity), remember: JSK made her name with paint and movables, too. The question isn’t how disparaging she’d be of our painted bike lanes, but of the endless time lag between painting them and turning them into real infrastructure.

Bike share, once it’s introduced, could help to hasten a move towards providing more protected bike lanes downtown. Whether that’s a good idea for people biking Portland’s small downtown, is debatable. Too much biking infrastructure there could wind up hamstringing free travel by people traveling by bike.

I heard Congressman Blumenauer on OPB today saying that bikes are a racial issue and that we have to make biking accessible to more than just middle-aged white guys in lycra with expensive bikes. What do you all think about that statement?

The CCC did a study a few years ago and the resulting report was discussed here on bikeportland. One of the (to me) fascinating insights was about the very issue you raise: for a time bikes were apparently associated with drug dealers/dealing and so in the minds of some black folks biking as a form of transportation took a nosedive.
http://bikeportland.org/2012/08/01/community-cycling-center-set-to-build-bike-repair-hub-at-new-columbia-75326

There is enormous inequity in infrastructure and funding, but not necessarily in attitudes towards cycling.

Equitable treatment is the correct phrase, not equal treatment. Equal funding of transportation might apportion dollars according to mode share.
Equitable funding would spend more on biking and walking than mode share so that people who bike, walk and take transit could travel across Portland in the same time as someone in a car.
Equality relates to inputs. Equity relates to outcomes.

this is why i specifically required to equity not equality.

If she really wanted to move the conversation in Oregon, she should have met with OOOT, the governor, and state legislators of both parties. It wouldn’t hurt to meet with the leaders of other cities too. But since Oregon only consists of Portland and Portlanders’ vacation spots, why would Blumenauer think to do that?

Given what we know about ODOT, I wouldn’t be surprised if they weren’t interested. They’ve certainly shown themselves to be disinclined to view the world as multimodal over and over again, at moments when the opportunity presented itself.

…the same ODOT who is now looking at a road diet and bike lanes on Barbur?

9watts
Reply to  was carless

Kicking and screaming… And after how many years of throwing sand in our eyes?