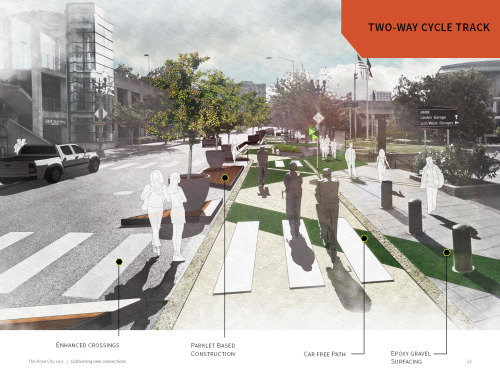 As Portland’s planning bureau talks about a future “Green Loop” biking and walking route around the central city, it’s just scored a burst of ideas from urban designers around the world.

A couple of the ideas even feature bikes.

Design Week Portland, an annual industry event taking place next month, has announced five finalists in its $20,000 challenge to propose ideas for public spaces along the route, ideally for the spots marked here in circles: 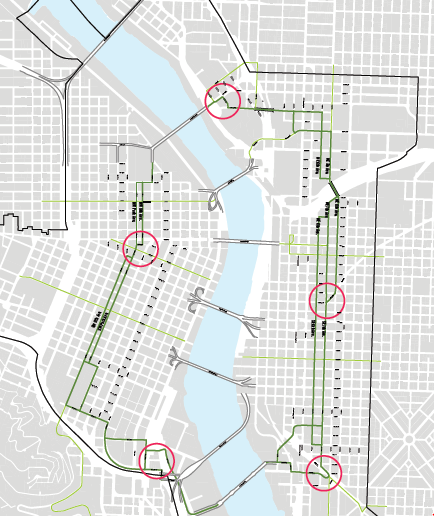 One of the finalist concepts, pictured at the top of this post, came from the Portland-based firms Alta Planning and Greenworks. They came up with a very detailed design that we could imagine being a motif throughout a future Green Loop: a broken green zigzag across the pavement, clearly advertising the route and interacting with “parklet” planters that would separate bike and car traffic. It’s clearly reminiscent of the Indianapolis Cultural Trail, one of the nation’s urban biking gems and a known inspiration for the Green Loop concept. 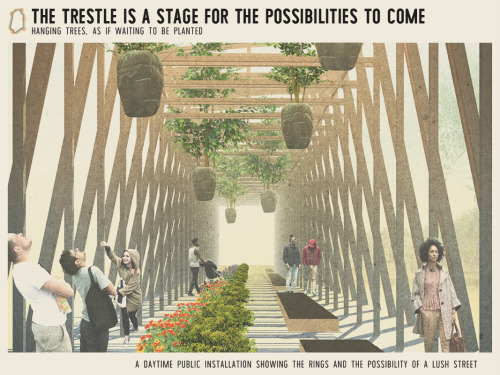 Above is another striking design that would hang trees from a series of elevated railroad trestles. The Design Week description also mentions that the proposal includes a system of “rings of ownership”: “block-by-block partnerships between the city and private property owners.” Presumably people who attend the Design Week event next month will learn more.

It’s not clear how or whether biking would fit into this design. Maybe it wouldn’t, and maybe that’s OK. Looks like a cool place to walk. 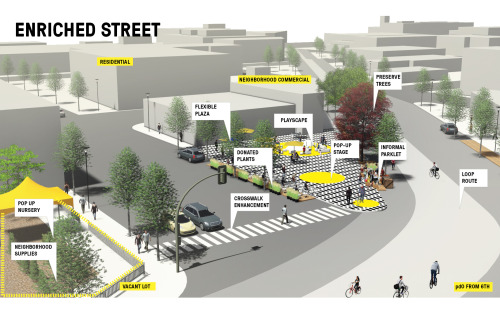 SWA Group of Sausalito, Calif., seems to imaging a corner similar to the one at corner of SE 7th and Sandy as a place for a triangular public plaza similar to those recently tested in Memphis and Chicago. This is a neat way to better use the extra space at this huge intersection, though we can’t help but wish the creators gave more than a moment’s thought to bicycling. Their concept for an “enriched street” seems to assume that bike and auto traffic just sort of takes care of itself. 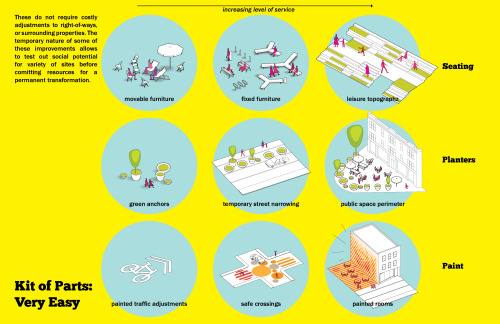 Peter Bednar of Prague offered what he called a “kit of parts” for low-cost street redesigns, including sharrows, big polka dots in the middle of intersections, and flowerpot planters to set off public plazas. 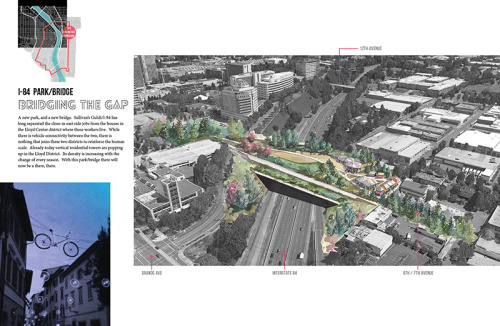 By far the most expensive and dramatic vision comes from a pair of national firms, DHM Design and CH2m, which partnered with local architects Hennebery Eddy and Tad Savinar to propose a massive freeway-capping forested park across Interstate 84 between 7th and 8th avenues. Their plan calls for a paved path connection as well as a new public space that could become the anchor of a new set of “Park Blocks” for Portland’s Central Eastside. This resembles a plan in Hamburg, Germany to cap long stretches of Autobahn in green space.

The contest jury includes five out-of-town urban design experts, advised by a technical committee of locals. The contest’s lead sponsor is the Bureau of Planning and Sustainability. The applicants will deliver full presentations of their proposals on Monday, April 18, 6 p.m. at Jimmy Mak’s Jazz Club; you can buy advance tickets here.

What’s not to like?
Apart from the cost. $50M for a $10 problem is not exactly a ‘wise use’ of taxpayer funds.
Now if we could only get a prominent family in Portland to privately fund 20% of the green loop, similar to the Indy trail ($12M/$63M, one donor), noblesse oblige and all that, that would be fantastic.

Do you have larger version of those images? It’s really hard to make out details.

Unfortunately, these were the largest available. They’re basically teasers for the ticketed event.

A Green Zig Zag? Riding on all green in south waterfront is bad enough.

And Epoxy gravel surfacing? oh my, this place is getting fancy.

JL,
it can be applied by a machine:
https://www.youtube.com/watch?v=MuSVkoVd3Jo

That was my thought as well. Why change the standards. Leave the bike lane green and the sidewalk gray. The stripe will only make people feel like the whole thing is a multiuse path.

Or incorporate cycling in a clear way that ingrains it as a standard practice and not something unique or special that requires a special color on the ground.

Now to expand it in spokes in every directions with highly diverted greenways, minimally one at every arterial, to connect to parks and schools throughout Portland. A BIG green loop with micro park rest stops for community gatherings.

This would be a nice start for the Inner east neighborhoods. If we want to boost mode share, we need to boost the bike Level of Service to new heights.

Just for what it’s worth, here is language from page 77 of the 1972 Downtown Plan:

2. Close Park and Ninth avenues to vehicular traffic, except for service access”.

“1. Develop east-west pedestrian-bicycle circulation along Flanders connecting Northwest housing district to the west and the North Park Blocks to the east”.

“1. Provide for major pedestrian-bicycle circulation along the North Park blocks connecting with Union Station to the North and the Central Park Blocks and Retail Core to the South.

2. Eliminate vehicle traffic on Eighth and Park except for service”

In retrospect it’s amazing how many of the ideas in the 1972 plan have now been implemented: the transit mall along 5th/6th; the MAX along Yamhill & Morrison; Pioneer Courthouse Square; Director Park; the removal of Harbor Drive and the creation of Waterfront Park; and the redevelopment of the industrial area north of Burnside with housing. However 44 years later we’re still waiting for those bicycle projects….

Great research. Really gives some perspective. And proves that bicycle infrastructure has a long Portland history of broken/forgotten promises.

Meanwhile, good luck even getting to this Downtown Loop from anywhere south and west of town.

We can only hope. I won’t hold my breath though… Best case, I see it ending up like the Fanno Creek trail with meandering routes and frequent gaps in dedicated trail. This results in a path that while enjoyable for leisurely local trips, is inconvenient for full length transportation based trips.

If it’s just me I would use Capitol / Barber / Terwilliger type routes to get downtown but I’m obviously not going to put my wife and child in a trailer through that.

While using old rail lines and existing natural area routes is nice for recreational use trails we are long overdue for new, wide, dedicated routes the promote long distance travel by bike so that families could make the 8 mile trip from Beaverton to Downtown without it taking an hour. Unfortunately the west side of the metro area is already very dense and not topographically suited for “new” trails per say but I don’t see why Capitol Hwy couldn’t become just 2 auto lanes with a generous natural barrier separating it from a major bikeway and chip trail.

What’s it for? Parks and public spaces are nice, but how about some method for getting to and from there?

Frustrating to see these designers chasing the dragon trying to pull a Highline. Really good urban design is not about creating Instagram-ready set pieces and wowing at every turn, it’s about making and connecting things larger than itself.

At least the Highline is somewhat paralleled by a decent off-stree bike route (Hudson Greenway). The green loop in Portland is not. We need this to be a transportation corridor first, and an art installation second.