A bicycle frame manufacturer based in north Portland has decided to call it quits. According to Bicycle Retailer and Industry News magazine, Zen Bicycle Fabrication “has discontinued operations and is in the process of vacating its premises.”

Zen launched in 2011 by company owners David and Jen Woronets. David was head of production for Vancouver Washington-based Ellsworth Cycles before going out on his own with Zen. According to BRAIN, the decision to close was based on a lack of business. “We built our facility based on maintaining a certain capacity, and we had too many months below that figure to continue… We wanted to maintain a 100-piece minimum order, but much of the interest is in runs of 10s and 20s,” Woronets told the magazine. The company had nine employees when it launched in 2011 but that number has since dwindled to five. 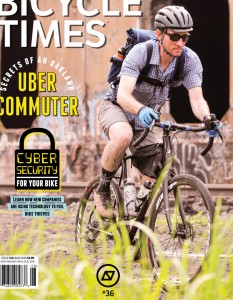 A Zen bike made the cover of the
August 2015 Bicycle Times magazine.

Zen’s business model was to tap into the demand for U.S.-made product by making frames on an OEM (original equipment manufacturing) basis for existing small-medium sized bike brands. Woronets thought rising lead times and costs from overseas factories would make his business competitive.

Now that he’s out of the high-volume manufacturing business, Woronets is pressing forward with the Zen Bike brand he launched last year. Since he’s selling off his production equipment, Woronets is actively seeking a new U.S. builder to take over the Zen brand. He told us via email yesterday that he hopes to partner with an investor to, “take the brand to the next level” by offering complete bikes, custom paint schemes, a new website and new retail strategy. And he’s not leaving the industry. The Zen Bicycle Fabrication website now offers brokering services for bike builders and product developers that need help getting their ideas to market. They’re also looking for frame builders who have the capacity to take on some of their existing customers.

“We will continue our local involvement in racing and rides in the Portland area and beyond,” Woronets added.

Sad to see, a victem of unfortunate trade, economic and industrial policy in the U.S. It would be nice if cycle entreprenuers with a better idea could have limited production bikes built here in the U.S. but competing with the cheap wages, cheap component costs and and currency advantages of the asian economies is too big a hurdle when trying to sell to consumers in the U.S, squezzed between rising rents , student loans and stagnating wages. We will probably need these skills soon when the Chinese economy crashes and more people are economically pushed out of “happy motoring”.

Well this is sad. I wonder was the source of the slow down, the rise of carbon or the lack of caring for “Made in USA”?

100 lot runs? Who came up with that idea? Does any other bike maufacture do that in the states?

So I’m going out on a limb and say the Lemond deal is off?

I’d imagine that whatever deal Zen had, was only to get LeMond back on the market. I wouldn’t be surprised if LeMond has moved to Taiwan production.
Zen was running a business which caters to unloyal customers who are insipred buy large margins. That’s a risky business model IMO.