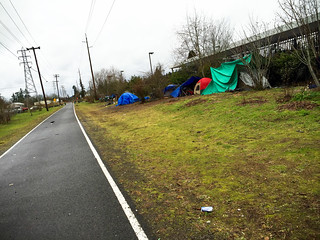 We apologize for the short notice; but we’ve just heard that the Brentwood-Darlington Neighborhood Association is hosting a meeting tonight (7:00 pm at Brentwood Darlington Community Center, 7211 SE 62nd Ave) to talk about issues related to the large number of people living in tents adjacent to the Springwater Corridor path near SE 82nd Ave.

As we reported last month, the situation reached a boiling point when business owners, residents, and users of the path shared a variety of concerns about the impact of the people living on the path. One of the activists mentioned in our story on January 14th, Terry Dublinksi-Milton, connected with Vahid Brown, a well-known homeless advocate who has helped establish the Hazelnut Grove camp in north Portland.

The City’s lack of a comprehensive response to homelessness creates many victims.
— from the meeting announcement

Dublinksi-Milton and Brown will be among the list of speakers at tonight’s meeting. Also expected to speak is Portland Mayor Charlie Hales’ Chief of Staff Joshua Alpert and co-owner of the Cartlandia food cart pods Carol Otis. Otis and her husband/business partner Roger Goldingay have been actively working to address the homelessness issue and raise its profile at City Hall. People who live outside are also being notified and offered rides to and from the meeting so their voices can be heard as well.

Residents, homeowners, bicycle riders and joggers, merchants, and the homeless have reported a steep increase in crime and vandalism at the homeless camp at 82nd and the Springwater trail. Complaints to City Hall have resulted in the arrest of two dangerous individuals in the area. However, there is good reason to host a community discussion of the issue and possible steps to ameliorate the problems.

Eric Wikoff, chairman of Brentwood-Darlington, has noted that “[t]he city must prioritize a viable plan for Springwater Corridor that reduces criminal activity, protects our designated environmental zone, and establishes basic needs services for our homeless population. I hope that you will join me for this discussion to seek the best solution for all parties concerned.”

Everyone is invited to learn and educate others. We have invited elected officials, candidates for office, activists in the homeless community, and representatives from the neighborhood. Activists have also offered to inform and transport campers from the area to the meeting.

The City’s lack of a comprehensive response to homelessness creates many victims. One camper in the area has suffered frostbite. This is unthinkable in our community and we are initiating a crowd funding site to help local activists care for such cases. If you can’t join us, please consider helping. We will be discussing this and other options on Thursday.

Please bring your ideas and solutions.

This meeting is open to everyone — regardless of where you live.

I know people feel bad for the homeless, but they’re making the city and dangerous and scary place to bike. Something needs to be done to deal with this problem, to send them someplace where they won’t threaten cyclists.

Where? The futon at your place?

That’s a broad brush that you’re painting the homeless with. As with all groups of people, there are good ones and bad ones. Don’t the honest homeless deserve protection from the bad ones, too?

I sometimes wonder if people in Portland show this level of punctilious care and interest in their own families’ and friends’ welfare. I don’t think Endo meant to be using a “broad brush.” He’s expressing a common and very well-founded frustration, and it’s aggravating to see anyone expressing that feeling immediately pounced upon by others implying the frustrated one is without compassion and suggesting it’s their duty to find all homeless people a home with no regard for differences among individuals (i.e., the jerks and the not-jerks).

I agree that this mentality is aggravating. What I was implying by my comment is that we need to remember that not all homeless people are causing problems and the “good ones” so to speak deserve the same protection as the housed, as I am sure they are just as fed up with the troublemakers as we are. It’s a dangerous line of thinking to base opinions of an entire group of people based on the actions of a small minority.

It was not my intention to imply that the OP was “without compassion”, and apologize if it was taken that way.

Hi Adam–thanks. My apologies in return for venting at you. I think most people use the blanket term while indeed remembering not all homeless are causing problems. It’s just awkward to figure out a way to delineate without fear of attack or reprimand.

“It’s a dangerous line of thinking to base opinions of an entire group of people based on the actions of a small minority.” I agree with this wholeheartedly. I’d add, though, that it’s been dangerous to our community and led to a whole world of rapidly spreading problems to assume all campers are benign, which seems to have been the City’s and homeless advocates’ line.

The city’s complete lack of enforcement with regards to criminal behavior by the homeless is ultimately going to create a backlash that will reduce help for the homeless community in the future. Just like the way bike riders as a whole are usually judged by the riders that flaunt the law, not the majority that follow the rules the homeless are going to be judged by the lawlessness that is now very visible everywhere in our city. The city needs to help the homeless that are looking for help and enforce the law when dealing with the criminal element. By failing to enforce the laws the homeless don’t feel they have to follow any laws.

The City has declared this situation an “emergency” but has not done anything about it. By permitting these shanty towns like Hazelnut Grove, the City creates a new class of citizen who is not protected by the civil laws, rules and standards of our society. We need temporary shelter, and the City should provide it in a dry, clean location with electricity and running water. The City should also help run the facility to insure safety and prevent the place from being a place for drug use/sales, and a base for a theft rings. The City owns numerous parking garages that could be temporarily converted for temporary housing while more permanent solutions are built. Charlie Hales spent 3 years giving away corporate tax breaks, ignoring the growing drug/theft problem, ignoring rising rents, and doing nothing to improve mental health services. Now there is a crisis and his solution is to permit permanent shanty-towns for people to self-govern, live in filth and stay out of sight. This model is deplorable, the City can and must make a real effort and avoid permanent campgrounds as a model.

Is anything to be required of the tenants? Maintaining standards of cleanliness, limiting possessions, looking for work (if able), getting off drugs? I agree with much of what you’re saying here but I’m beginning to itch when I hear the phrase “The City should provide” when it rarely if ever is mentioned what exactly is required of the beneficiaries of the City’s (our) largesse. If expectations and boundaries aren’t laid out we’re fostering a child-like mentality and helping exactly no one, and creating an even bigger problem for ourselves in the future. If I were among the hardworking poor in this City, I think I’d be at my wit’s end with all the sympathy and $$$ being spent on the homeless in Portland.

I was walking my dog past the homeless camp along the ramp from the eastbound Hawthorne bridge to the Esplanade this week — key word here is “walking,” we were in motion, the dog wasn’t sniffing or setting up to pee or anything — and a homeless woman asked me to move along because “I’m allergic to dogs”. Sorry, but this is reaching Portlandia levels of absurdity. Camping next to a public right of way doesn’t give you the right to control who uses it!

So any reports or noteworthy discussion from the meeting?

These people have made decisions to put them where they are.
I say, assistance to those who at least actively seek work.
Just like regular folks like us.
like unemployment, food stamps, etc.

Food stamps helped me through my surgery recovery.
And forced me to keep looking for work.
And helped me make an awesome resume!’ Of which I still could have!
I couldn’t have done this without assistance, and persistence.
Nor homeless from their tent.
I now make 30.00 an hour as an electrician. And company vehicle.
Assistance and persistence are the key.

“The” camp along the Springwater trail? Only one of them? And what about all the camps along the MUP? I walked from Division to Foster recently and passed no fewer than five camps. Plus the village set up under the I-205 overpass at Division.