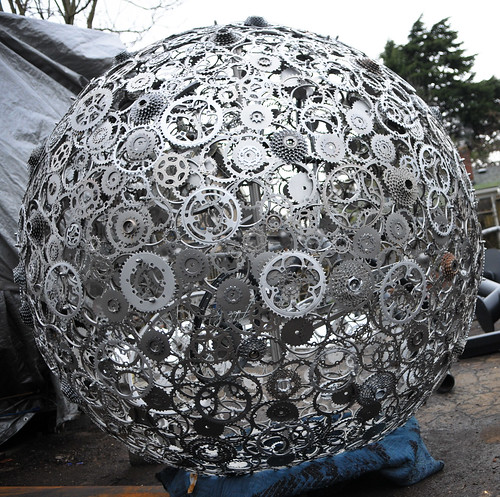 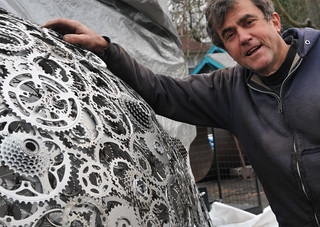 Portland’s busiest bike street is about to become even more bike-centric. Tomorrow at the corner of North Williams and Cook, crews will install the “Gear Sphere,” a sculpture made out of about 1,300 bicycle chainrings and rear cassettes.

The sculpture is by Ivan McLean, a renowned artist based in North Portland (his shop is in Delia on North Albina north of Rosa Parks Way). McLean was commissioned by LRS Architects to create one of his signature spheres with a bicycle theme in order to “tie into the bike corridor on Williams.” LRS plans to install the sculpture in a planter on the southeast corner of their Cook Street Apartments — directly adjacent to their short-term bike parking racks and a bike lane that sees more daily riders than anywhere in the city (see image below).

Concept drawing of Cook Street Apartments that includes the sphere.

I stopped by McLean’s shop this morning to get a closer look. 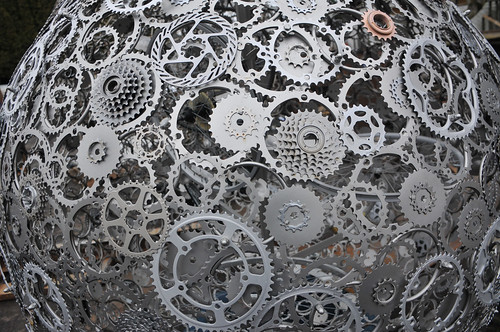 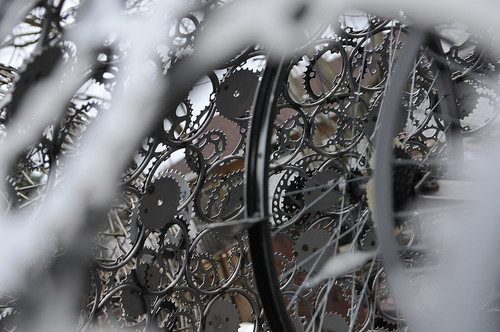 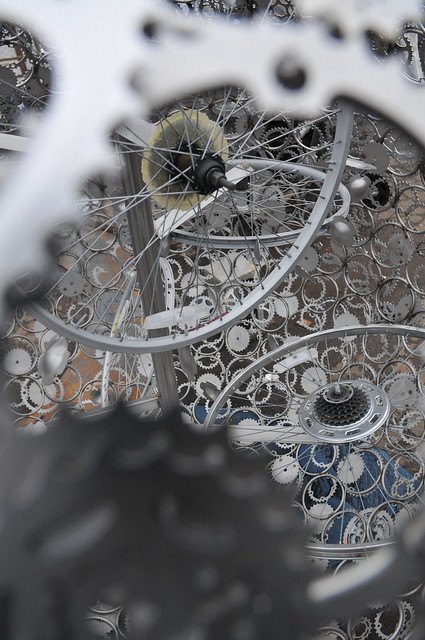 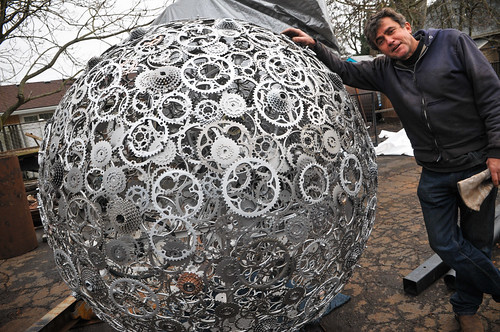 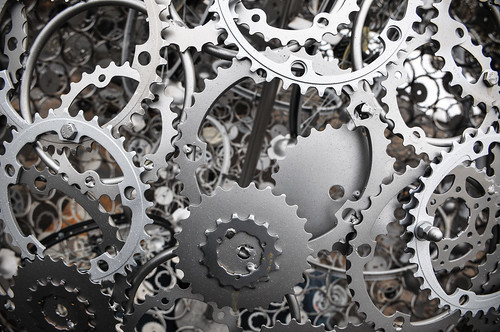 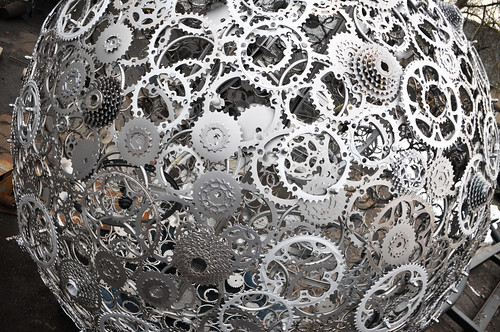 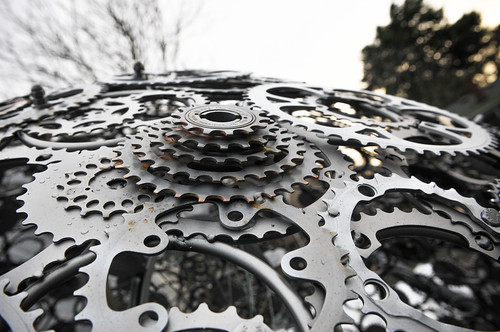 The cassettes bulge out, giving the sculpture more depth and texture.

The sphere is six feet in diameter. McLean partnered with the Community Cycling Center to find the used chainrings. After he used all they could supply he was still several hundred chainrings short, so he ended up laser-cutting some of them himself. There’s a shaft in the middle to add stability and McLean has added several bicycle wheels to it.

While he’s added a glass-bead blasted finish to the parts, some of the chainrings and cassettes have already started to rust. McLean is fine with that. “It will be kind of cool with all the different textures as the rust comes through.”

You might not know his name but you have almost certainly seen McLean’s other work around town. He’s done several pieces for New Seasons Market, including the carrots on Vancouver and Fremont and the fish on the roof of several locations. McClean is also behind the road sign trash cans on Alberta Street; the blue, tree-inspired bike racks at the new Mason-Williams Apartments a few blocks up the road from the Gear Shere; the public benches along Highway 30 through Linnton (where he lives); and others. And if you’ve ever attended the What The Festival in the Gorge, McClean is responsible for the 70-foot long, fire-breathing dragon stage with the 30-foot pagoda that houses a DJ booth. (He’s also profiled in the current issue of 1859 Magazine.)

Speaking of fire, before I left I asked McLean if he had any other thoughts to share about the Gear Sphere. “I’m sad it doesn’t have any flames,” he said, with a smile. “Flames make everything better.”

Next time you’re riding up Williams, remember to look to your left as you cross Cook Street to steal a glance at this fantastic sculpture.

It is that… It reminds me of the Death Star, and like Freddy, I don’t like Star Wars.

Speaking of art on Williams, does anyone know the status of the “Honoring History” art component of the Williams project? http://www.portlandonline.com/fish/index.cfm?a=485505&amp;

Yeah I wonder if that’s ever going to happen? Or maybe just get swept under the rug like so many things around that area.

It was easier to laser cut additional pieces, rather than check with other shops for used rings?

dan
Reply to  Chris I

Jessica
Reply to  Chris I

Community Cycling Center salvage sale on Sundays sells whatever you can strip off a bike for $0.50/lb. Can’t get much cheaper than that.

It’s good to be reminded, too, that yes, there’s an actual Real Professional Artist behind the cool sculpture and even arty trash cans around town. It’s easy to take those things for granted.

That is awesome. Here’s a gear sculpture in France (at Ventoux).

This triggered a memorable moment that I had on Williams about seven years ago when I first moved to the area (from another part of Oregon where I grew up). There was a house that hung a sign: “This is a no spandex zone”. Certainly not the case anymore. Nonetheless, I love the sculpture!

What’s the ratio on that gear set?

It would be cool if it were planetary as well.

What a wonderful addition to Portland’s collection of street art. Another testimony to the time tested axiom: ‘beauty is in the eye of the beholder’. Looks like lots of hard work putting all that stuff together to make a sphere. If paired with a big chrome dog sculpture that Jeff Koons could probably come up with, it could look like a ball, a doggies play toy. People would love seeing the dog and his ball, and have their picture taken with it, like they do with the umbrella man at Pio Sq.