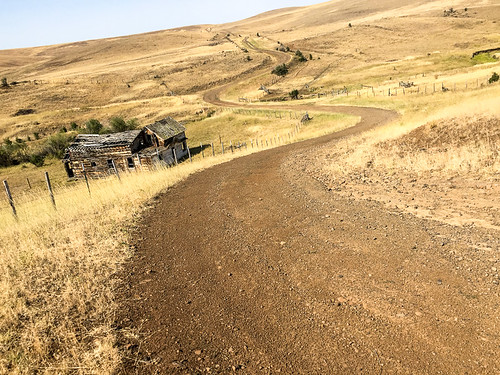 A derelict homestead sits nestled in a remote valley on the rough and rocky Pine Road in the Zumwalt Prairie about 25 miles north of Wallowa Lake.
(Photos © J. Maus/BikePortland)

Last week I spent five days taking a closer look at bicycling and bike tourism in Wallowa, Baker, and Union Counties as part of a partnership with Cycle Oregon. Starting in the small town of Halfway on Monday, I rode northeast to circumnavigate the Wallowa Mountains and Eagle Cap Wilderness. I camped, rode rocky dirt roads, did some bushwhacking, sampled singletrack on a mountain bike, rolled on an official State Scenic Bikeway, and met the people working to make this region a biking destination. All this week I’ll share stories and photos from the road.

When I head out on a bike trip I like to keep my options open. I have general sense of what I want and need to accomplish (on the business end of things), but I always leave time for exploration. And it’s often in those times when the best stuff happens.

Such was the case with my trip in Eastern Oregon last week when I followed my curiosity into the Wallowa Valley and Zumwalt Prairie.

After I met some local bike tourism entrepreneurs and checked into my hotel (the cozy Indian Lodge on Main Street), I found myself in Joseph with an evening to spare before heading out the next morning. So, with my new Forest Service map in hand, I looked for a way to get up to Wallowa Lake without having to use the main highway. The main road isn’t terrible, but it can get crowded with big RVs and there’s no real shoulder to speak of. And besides, backroads are where all the action is.

After finding a route that would take me up to the south end of the lake on gravel roads, I set off into the Wallowa Valley east of Joseph. As the roads turned to dirt and the sun got closer to the horizon, the true beauty of this area unfurled in front of me. My route to the lake didn’t pan out (a locked gate across one of the roads was a bummer); but I was happy to spend more time pedaling the valley. 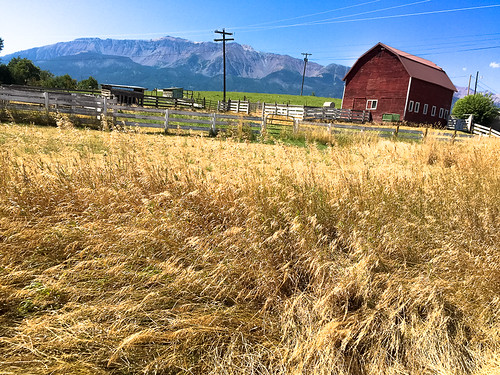 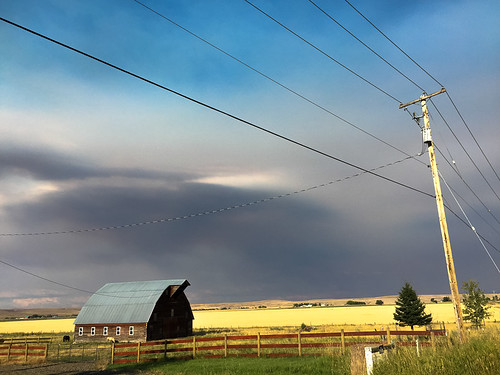 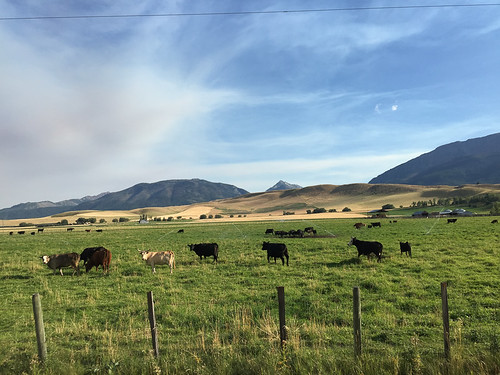 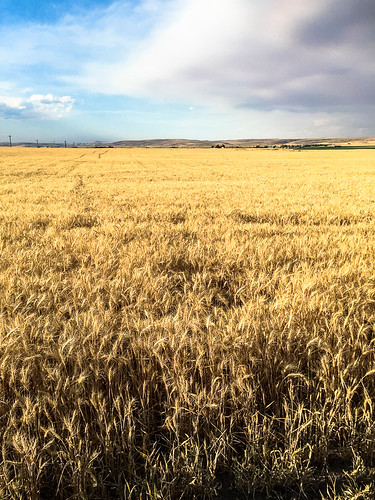 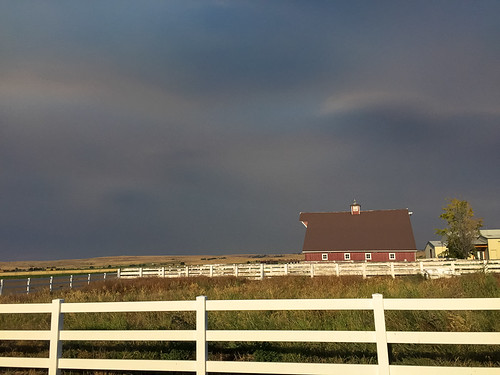 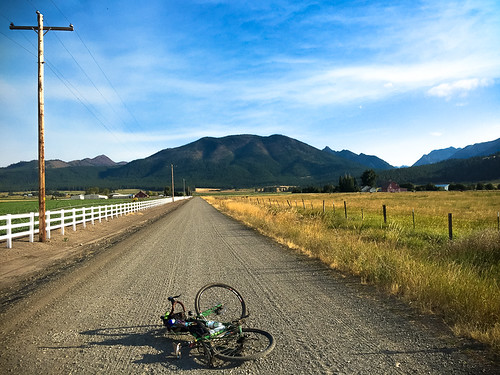 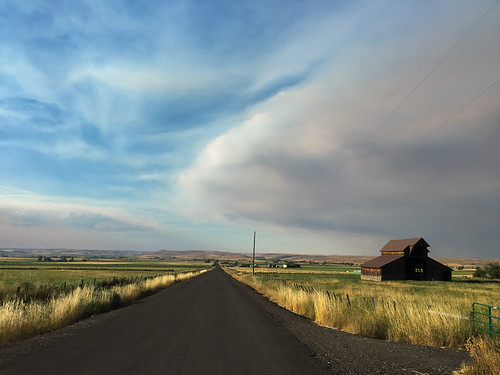 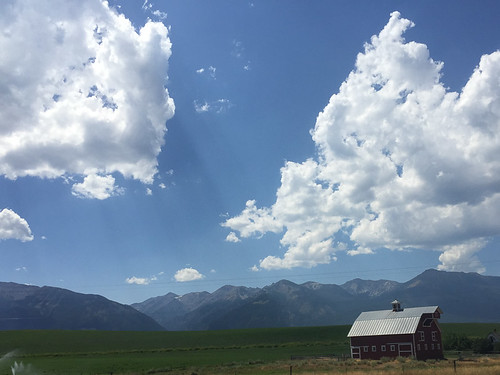 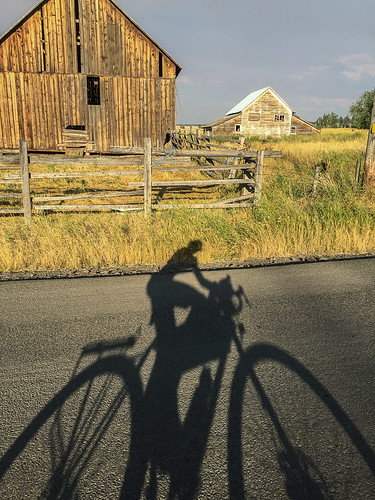 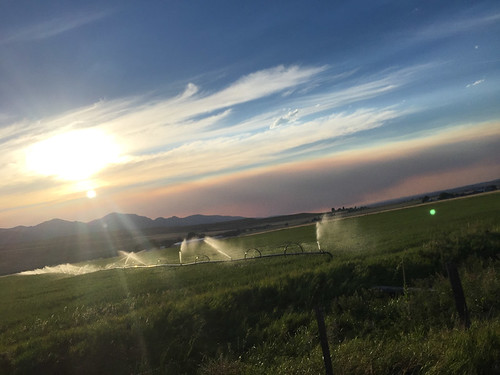 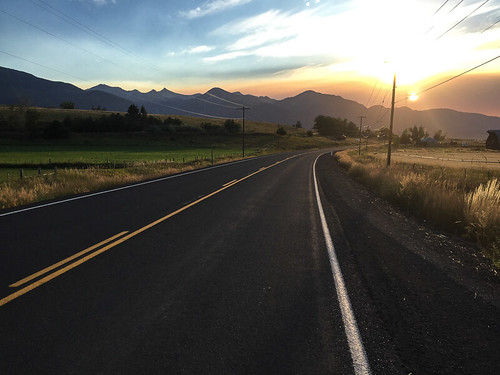 I got up early the next morning to catch morning light on Wallowa Lake, the valley, and Zumwalt Prairie. I didn’t know much about the Zumwalt before this trip, other than all the people I’ve heard gush about its beauty. I’ve since learned that the 51 square-miles of rolling hills and grasslands is pretty special.

The Zumwalt is the largest private nature sanctuary in Oregon (thanks to the Nature Conservancy), it’s an officially designated National Natural Landmark, and it boasts one of the largest pieces of in-tact native grassland in North America. Turns out that unlike the fertile valley next door, the prairie’s canyons, shallow and rocky soils and high elevation made it impossible to farm for crops. There are several ghost-like old ranch houses that dot its hillsides as a testament to broken dreams and hard times.

What does thrive in the Zumwalt are all types of birds, plants, and wildlife.

To get a sense of the place I road out Buckhorn-Zumwalt Road about 25 miles and then looped back on Crow Creek Road. I also took a side trip out to the Zumwalt Prairie Preserve, an outpost of signs and trailheads managed by the Nature Conservancy… 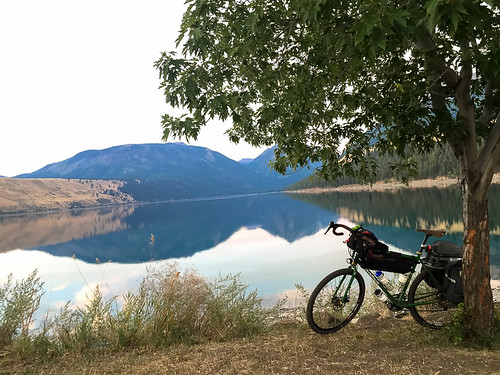 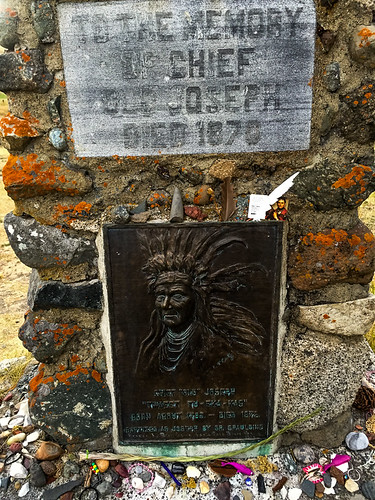 Chief Joseph’s gravesite. Riding through this valley and prairie my thoughts often drifted to the plight of the Nez Perce, the native people who lived on this land for thousands of years prior to its “discovery” by white settlers. The town of Joseph is named after their leader, Chief Joseph, and the Wallowa Valley was their tribal home until they were cheated out of their land and ultimately forced off of it by the U.S. government in the 1870s. 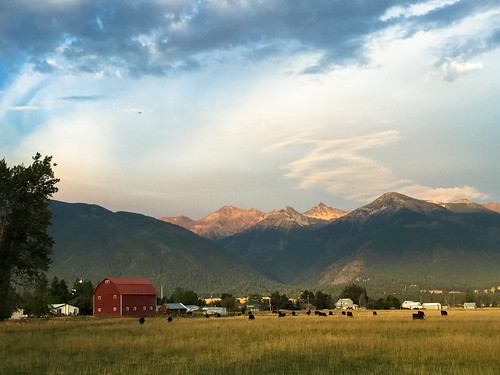 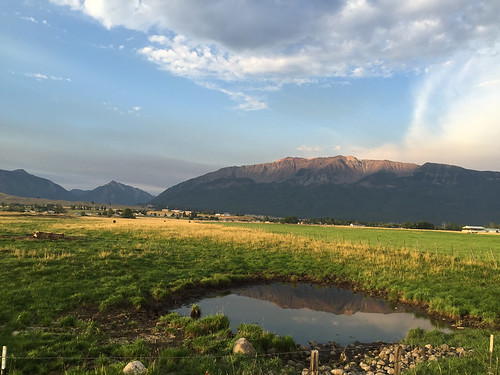 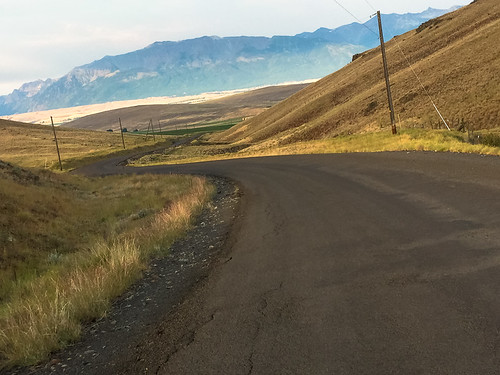 The road heads up into the prairie and leaves the Wallowa Mountains in the distance. 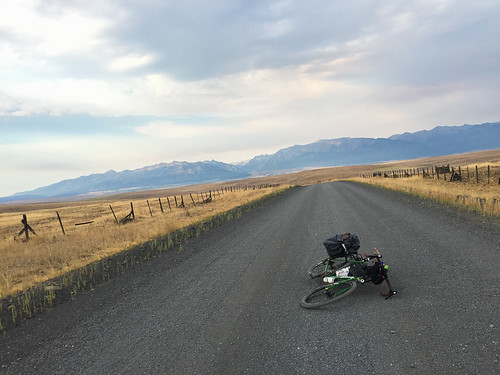 It was fun to look back and see the summits around Wallowa Lake fade away. 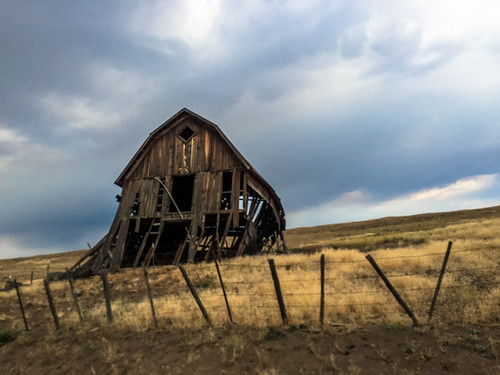 Farming this land wasn’t easy. Just ask the owner of this place. 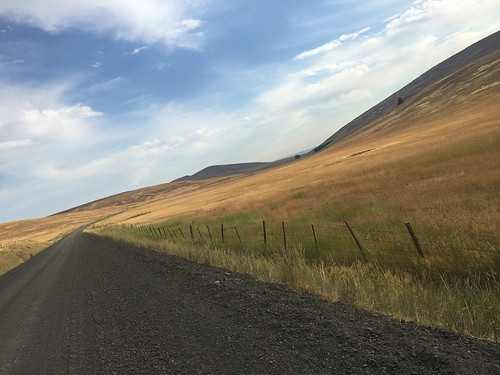 Getting into the good stuff. 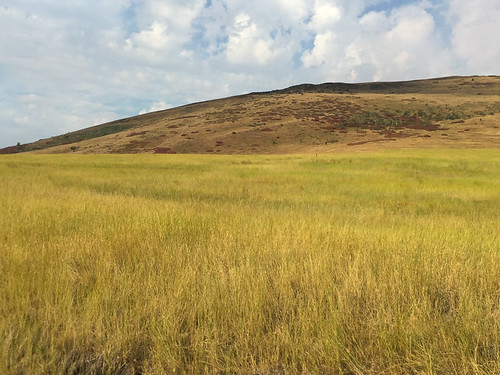 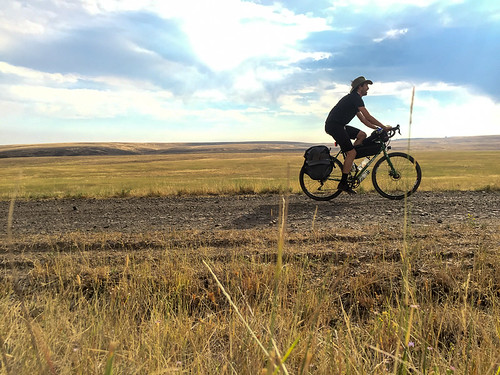 Riding in the Zumwalt Prairie Preserve area was especially sublime because it’s the only place out there where the barbed-wire fences go away and it’s just you, the road, and the prairie. 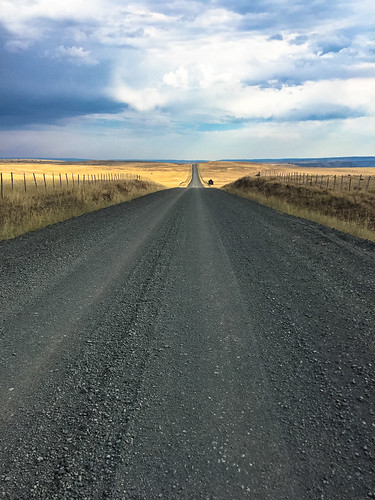 Perfection of you’re into the gravel thing. 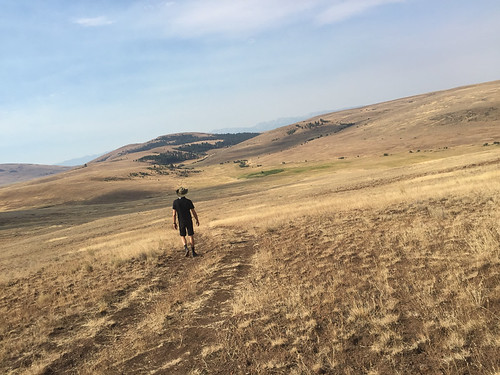 Give yourself time to do one of the several signed hikes in the area. 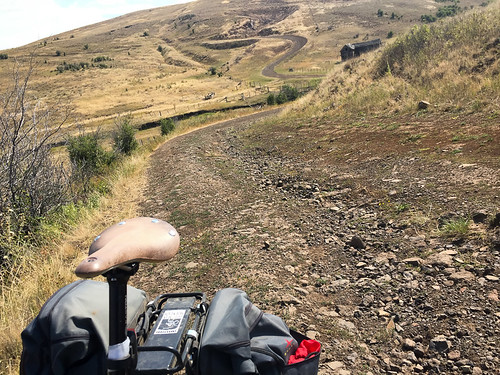 Pine Road was rutted, rocky and pretty rough going for about seven miles. 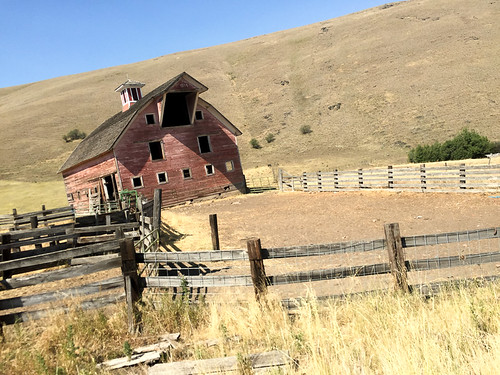 Next time you find yourself in Joseph. Grab a bike and do some exploring. Here’s a route to get you started.

— Read more in our 5 Days in Eastern Oregon series.

Now that Terminal Gravity is open all seven days of the week (wasn’t during my tour out there a few years ago, much to my chagrin) I can’t think of any reasons to not be heading out east to ride. Keep it coming Jon!

Looping from Baker City up to Joseph and then back through the Hells Canyon is a super option for seeing that area. Lots of good camping, B&B’s little restaurants and other essential services. The descent down to the bottom of Hells Canyon is a blast!

It looks hipster-free too! No corners to drink PBR and be seen on.

You could have invited a few of your friends….

would bp consider grouping all these “touring” posts together ? it would be extremely helpful to those of use considering getting into this sort of biking but are not sure how to get started. The post you had about the outback ? where you provided details about your bike and all the gear was great but I’m not sure how to find it again.
Thanks !

absolutely anna! Keeping posts organized is something I think about a lot. Unfortunately it’s not always easy to do! For now, I’ve actually already categorized these eastern oregon posts here – http://bikeportland.org/cats/features/5-days-in-eastern-oregon. As for the others. You are right. I need to go and make an easy-to-find page where all the big rides I’ve done can live in the same place for easy reference. I’ll make a “The Ride” category and try to put everything into that.

So beautiful! Looking at these for the second time now from my desk, and wishing I was out there. Thanks for sharing your travels.

Nice, I’m really looking forward to getting out that way on CO. Only three more weeks!

Thanks for the great photos, Jonathan! I lived in Wallowa County for 20 years, your article brings great memories of the amazing cycling there…

Jonathan – the only part of the ride that is nasty is the ride from Enterprise back to La Grande…would be cool to find alternatives to the Highway. I did La Grande to Baker…Baker to Halfway and then Halfway to Joseph last year and it was a blast. So many options for all road touring or a mix of bikepacking/off road stuff. Wallowa county is so great. Thanks for posting about this.

Inspiring writing; inspired photos! I spent a summer before college digging holes for telegraph line for the Union Pacific out of Baker. (Not Baker City!). We lived in boxcars next to the rail station. Never even made it into town! I will remedy that and all the other missed opportunities this summer – 52 years later!

Thanks for these postings.