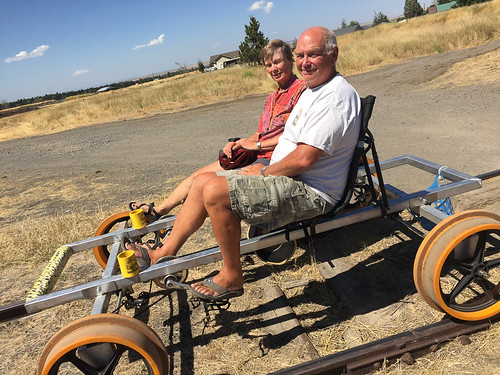 Anita and Kim Metlen on one of their railrider cars.
(Photos © J. Maus/BikePortland)

Last week I spent five days taking a closer look at bicycling and bike tourism in Wallowa, Baker, and Union Counties as part of a partnership with Cycle Oregon. Starting in the small town of Halfway on Monday, I rode northeast to circumnavigate the Wallowa Mountains and Eagle Cap Wilderness. I camped, rode rocky dirt roads, did some bushwhacking, sampled singletrack on a mountain bike, rolled on an official State Scenic Bikeway, and met the people working to make this region a biking destination. All this week I’ll share stories and photos from the road. 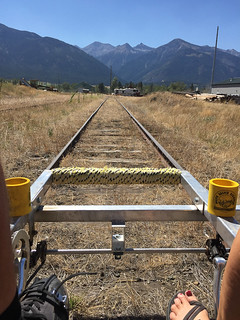 With four decades of experience riding bikes of all kinds on all types of terrain, I savor any opportunity to do something new and different. Pedaling a pedal-powered railcar on an inactive railroad certainly qualifies.

After camping overnight in the Wallowa-Whitman National Forest, I reluctantly left the mountains and headed west into the Wallowa Valley where the vibrant little town of Joseph awaited me. On the top on my list when I got there was to meet Anita and Kim Metlen.

The Metlens are the bicycle-loving duo behind the Joseph Branch Railriders. Now “retired” after selling a bike shop they used to run in La Grande (The Mountain Works, now operated by Kim’s daughter Mavis Hartz and her husband Whit Hartz), the Metlens have turned their attention to a different kind of rail-trail.

“We’ve been told all our lives that you can’t play on the railroad. Well, now you can.”
— Kim Metlen

On an old railroad line between Elgin and Joseph (historically known as the Joseph Branch Railroad), the Metlens have planted roots of a unique business: guided rides on a pedalcar that has been custom-made to fit the rails. Weighing just 100 pounds and made out of aluminum, the cars fit two people side-by-side. With one gear for simplicity and your rear-end and back cradled in a comfortable chair, you just sit back and pedal while admiring the summits of the Eagle Cap Wilderness, gliding over rivers and creeks, and taking in the iconic barns that dot the verdant Wallowa Valley.

Officially open for just over a year, the Metlens report a brisk business. “They’re coming in droves,” Kim said when we met last Tuesday on the patio of the R & R Drive-In, a popular local hangout just off Joseph’s main drag (they make a killer patty melt by the way). What’s the appeal? Besides railroad buffs and people like me who are drawn to anything that’s pedal-powered, Kim says it’s just plain fun. “We’ve been told all our lives that you can’t play on the railroad. Well, now you can.”

Video by PathLessPedaled from last October.

The Metlen’s business has been helped by word-of-mouth and some solid media publicity, including a feature on Oregon Public Broadcasting’s Oregon Field Guide show back in February.

But like other eastern Oregon bike tourism entrepreneurs I’ve met, the Metlens are too smart to just sit back and think customers will magically appear. They know bicycling-inclined visitors are key to their future so they’ve taken an active role in helping promote two-wheeled tourism in the area.

The Metlens were key proponents for the Grande Tour Scenic Bikeway which meanders between La Grande and Baker City one valley to the west. They’ve also helped advocate for the new biking and walking path between Joseph’s main street and the north end of Wallowa Lake that ODOT plans to build next year. They’d like to someday see a Hells Canyon Scenic Bikeway and they’re currently working on adding a bike trail alongside the railroad they currently operate on.

Asked about whether bike-related tourism is being felt in places like Wallowa County, Kim and Anita are optimistic but realistic. “It’s making an impact and it’s steady,” Kim said. “It’s a steady flow. It doesn’t make anybody rich, but it gets them through a hard time.”

“With cycling… It’s a one-on-one thing. They don’t just take over they community, they flow through it.”
— Anita Metlen

Anita and Kim credit an all-of-the-above approach for what they see as a marked uptick in cycling tourists around Joseph; from the scenic bikeway to the RideOregonRide.com website and an array of state subsidized marketing initiatives aimed at piquing cycling interest.

And as 40-year residents of Union and Wallowa counties, the Metlens see how bike tourism is more sustainable than other activities that attract visitors to the area. “With cycling,” Anita shared, “It’s not a big, one-time event like the Blues Festival. It’s a one-on-one thing. They don’t just take over they community, they flow through it. The bike visitors actually visit the community.”

What about motorcycle riders? I asked as a group of Harley-Davidson’s rumbled past. How does bike tourism compared to that? “There will never be as many cyclists at motorcyclists,” Kim said. Then, perhaps noticing I was a bit crestfallen by that statement, he added, “But I hate the rumble. We don’t need that. They don’t need that. The way I see it, your fun shouldn’t interfere with anybody else’s. That’s what I love about cycling.”

And I bet he’d say the same thing about railriding.

— Learn more about the Joseph Branch Railriders via this excellent write-up and photos by Road Less Traveled.

Did ya ride it?

Great seeing these trip posts. Reminding me of the tour I took out there in 2010.

Helmets on the “railbikes”? I mean, it’s effectively impossible to fall off. You could be hit by a car but a helmet won’t help much. Huh.

Also at the end of the video you can hear a non-road engine being started. Do they have a motorized railcar too?

Aha. The end of the OFG video shows the motorized railcar.

You are required to wear helmets and a seat belt because of insurance liability and the contract they have with the owners of the railroad.

Helmets are good insulation from the sun. On a rig riding the rails like they have, I suppose a big ol’ hat with a wide brim would work as well or better for sun protection, but with much exertion, they sweat up.

The rail rider looks like huge fun. With very little wheel to rail resistance, the rig ought to be easier to pedal than a bike on an asphalt road. Would be nice if there was a section where it could be pedaled up to 40 mph or so…but nothing wrong with slow as long as it’s at least faster than a walk.

Curious if there is a MUP between Joseph and Enterprise? It seems like that would be a good thing for tourism and the community in general, much like the trail running between Moscow ID and Pullmand WA.

It’s been years since I rode a bike on railroad tracks. Of course, back then it was on a live track and the rig was an attachment for a normal bike that reached to the far rail. A dead spur line seems much less stressful.

I’ll have to remember now to don my helmet the next time I take Amtrak too.

A lot of momentum behind this. Got to meet Kim (who is amazing) during our OBPAC meeting out in Pendleton. We also had a chance to talk to the Transportation Commission which was great! You may not know it but eastern Oregon has really embraced cycling as an economic driver. Huzzah!