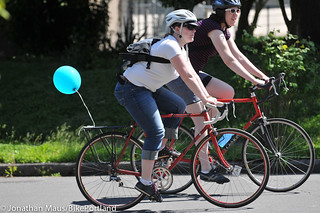 The program will be
modeled on ones in DC and Philadelphia.
(Photo: J.Maus/BikePortland)

With companies and groups for female bike users popping up across the Portland area, the Bicycle Transportation Alliance has launched a new program aiming to stitch together their social scenes.

From the women’s cyclocross course at Gladys Bikes to the women and trans wrench night at the Bike Farm to the mom-focused Andando en Bicicletas en Cully club to the Ride Like a Girl training program, lots of Portland-area bike lovers have been throwing themselves into making it easier and more fun for women to ride.

Thanks to a new grant from Metro, the BTA now has a half-time staffer to support those efforts and build other such networks of women who bike. The advocacy group’s first Women Bike commute clinic is tomorrow (8/20).

In addition to the free monthly workshops and clinics, BTA Program Manager Nicole Davenport is organizing a Facebook group for local women who bike; a monthly ride; and coffee meetups every Wednesday morning at rotating locations.

“The initiative came out of looking at Metro’s research about how many people are riding bikes and the gender makeup of it,” Davenport said Tuesday. In the Portland metro area and around the country, only about one in four bike commuters are women; within Portland proper, it’s only about one in three. Men are also overrepresented in lots of bike events, from weekend century rides to the BTA’s Bike Commute Challenge.

Davenport said the Women Bike program is modeled on successful programs developed by the Washington Area Bicyclist Association and Bicycle Coalition of Greater Philadelphia. She said the WABA group, founded in 2013, had interacted with thousands of women in the DC area.

“I posted a question about bike short rash from wearing chammois, and how do you fix that. That’s a question I think I would never ask a male counterpart.”
— Nicole Davenport, BTA Program Manager

The BTA says the “heart” of its program, like its peers in DC and Philadelphia, is a closed Facebook group that serves as the hub for online conversations.

“There are certain things that have already come up on the Facebook group where I have felt like, wow, I wouldn’t feel comfortable bringing up in a mixed-gender group,” Davenport said. “I posted a question about bike short rash from wearing chammois, and how do you fix that. That’s a question I think I would never ask a male counterpart.”

Davenport, who previously worked as the BTA’s former membership manager, is also spending the other half of her time as the BTA’s coordinator for the Bicycle Commute Challenge. That job is also partially funded from the same two-year Regional Travel Options grant from Metro.

In both the BCC and Women Bike, Davenport hopes the BTA will be able to reach people of various cultures as well as multiple genders.

“Certainly one of the goals that we have is that we want to be reaching a diverse group of women,” she said. “We want to make sure that the program isn’t just preaching to the choir and it also isn’t only for white middle-class women. … Whatever race, socioeconomic status, where they live in the region and hopefully be able to use those people through our bicycle advocacy as well.”

April Streeter has a great Meetup group and she has done lots and lots of events and programs to encourage women to ride. I have no idea if she is funded, is an employee or does it as a volunteer, but her enthusiasm and joy is wonderful. Thank you, April! http://www.meetup.com/womenonwheels/

Love how we keep segregating ourselves…it’s wonderful, ain’t it?

maybe after men stop acting dumb 100% of the time. sorry for partying!

Whatever happened to the WOMBATS that rode up in Forest Park? They were kind of a scary group actually.

And to think that I thought the (always welcome) newcomers had already Balkanized cycling as much as possible. How could I have overlooked such an obvious way to divide us further?

am dissapointed that the only way to connect is via facebook, not all of us want to be members, and, the coffee gatherings are on on weekday morn when most of us work. also some of the snottiest folks I’ve encounted in the lycra/fancy bike set were women (this on a portland wheelman ride).