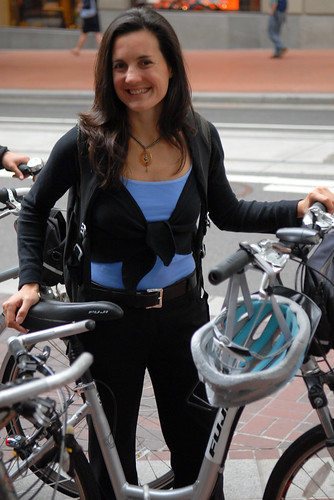 Deb Hubsmith, the person widely credited with establishing the Safe Routes to School program in America, has died. She was 45 years old.


Hubsmith was diagnosed with leukemia in October 2013 and passed away yesterday at her home in Marin, California.

I met and spoke with Deb several times over the years. I’d run into her at the National Bike Summit in Washington D.C. and we connected when she came to Portland for the Safe Routes to School Conference in 2009. She was without question the most polished and powerful advocate for cycling I’ve ever met. What I admired most about Deb was her sheer confidence in the cause. She could look a Senator in the eye and ask for $500 million like it was small talk. We need more people like her in the national bike movement. 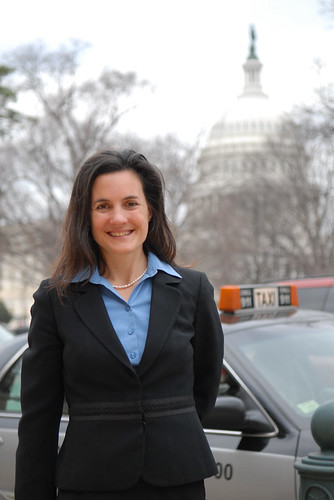 Deb was a powerful bike lobbyist.
Here she is in 2010 on Capitol Hill.
(Photo © J. Maus/BikePortland) 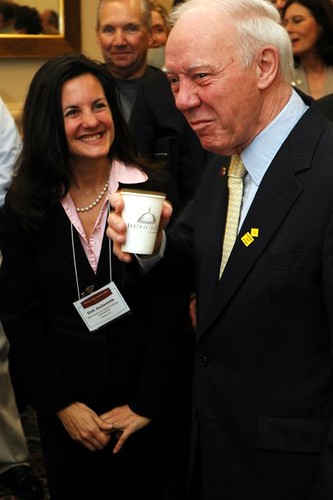 Deb and one of her biggest allies in Washington,
former U.S. House Rep. Jim Oberstar in 2007.
(Photo © J. Maus/BikePortland)

Deb has touched the lives of hundreds of thousands of students and families who have benefited from her work to make it easier to walk and bike to school. She was an inspiration and her work left an indelible mark America. Our thoughts are with Deb’s family and friends. May she rest in peace.

Below is a video honoring Deb’s life and work that was produced by the Safe Routes to School National Partnership (the organization she founded and led for nine years) and was shown at the 2015 National Bike Summit:

🙁 As a dedicated hermit, I so appreciate people like her who get out there and do the not-so-fun work for the greater good. I’m sorry she’s gone.

R.I.P., Deb. It’s horrible that we lost you so soon. I remember fondly visiting your house in Marin over a decade ago for a party following a bicycle event, before Safe Routes to School exploded on the national scene. Even back then, you were a powerful and effective bicycle advocate within the San Francisco Bay Area, and influential in ensuring that the first Bay Area Bicycle Plan of 2001 was at least a step in the right direction for bicycles. I enjoyed working with you, and I enjoyed even more hearing from those in power how you effectively lobbied them to consider bicycles, especially when their priorities otherwise lay elsewhere.

You will be missed greatly. There are too few remaining in this world like you.

So sad, and a loss to the advocacy of cycling.

Never met her, but pictures, stories and remembrances posted here, say a lot. So beautiful and bright. Even given such a relatively short life, how wonderful to have been able to leave such a fine legacy and inspiring example to other people with hopes of making some small improvement to life for everyone during their time here.

Hopefully she is riding a lovely bike in the sky someplace.

Wow! Another person who really deserved to be alive more than me. Whenever a life is snuffed out too soon, I think of Benjamin Jonson’s poem:

It is not growing like a tree
In bulk doth make Man better be;
Or standing long an oak, three hundred year,
To fall a log at last, dry, bald, and sere:
A lily of a day
Is fairer far in May,
Although it fall and die that night—
It was the plant and flower of light.
In small proportions we just beauties see;
And in short measures life may perfect be.

Deb inspired so many, including me, to do the work we do. Thank you Deb for all that you gave to the movement and for leaving a lasting legacy for our children. You will be sorely and deeply missed.