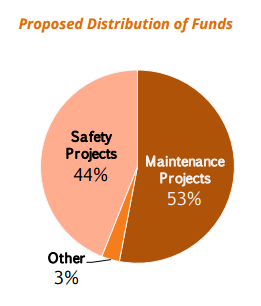 The line isn’t as clear as you think.
(PBOT graphic)

We have tendency in Portland to think of transportation investment as a zero-sum game. Our local leaders and media like to split people up into nice, little, convenient groups so they can create narratives and a dichotomy that grabs attention.

One way that tendency often manifests itself is with the “paving/maintenance versus safety” debate. During the push for the Our Streets funding measure, the Portland Bureau of Transportation used percentages and pie charts to split these two priorities into categories. With such clear lines in the sand it’s no wonder that the community (and the media) latch on and start shouting about which one deserves more (I admit it, I’ve been guilty of doing this myself in the past).

It doesn’t have to be this way. The truth is, paving/maintenance projects can also be safety projects that improve bicycling and walking. And guess what? PBOT gets it.

I’ve come across three recent examples that illustrate what I’m talking about.

Back in May, PBOT repaved North Denver Avenue from Rosa Parks to Buffalo Street. When they re-striped the bike lane, they made it a foot wider and improved the pinch-point at intersections: 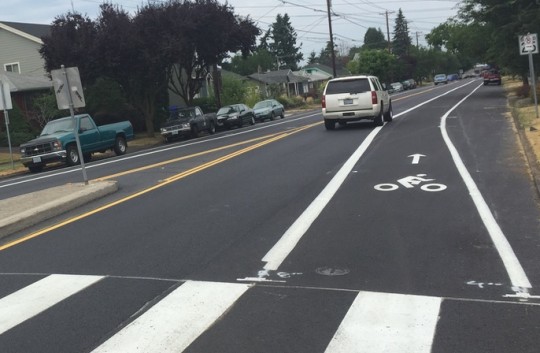 Between last winter and this spring, PBOT repaved North Killingsworth from 33rd to 53rd. When they put the striping back they added a buffered bike lane: 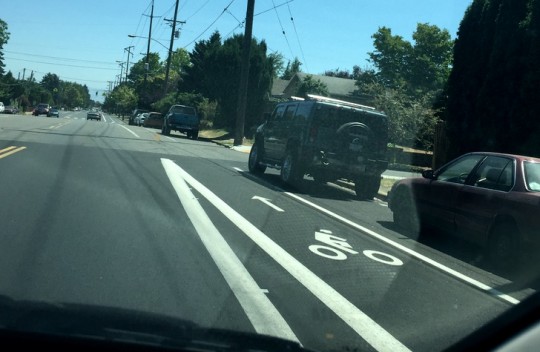 And just today, PBOT officially announced a project we told you about last month that will repave about a half-mile of NE 15th/16th Avenues in the Lloyd District. What will happen along with the repaving? Yep. You guessed it; a widening of the bicycling lanes, “to improve safety and comfort” for people on two (non-motorized) wheels. 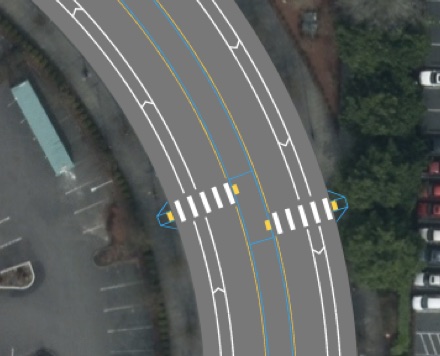 Wider bike lanes and new crosswalks will come with a
repaving project in the Lloyd District this week.
(Image: PBOT)

While these bicycle access improvements are still just paint and not the true, physically protected bikeways many Portlanders are yearning for, at least PBOT is claiming space and moving in the right direction. And while PBOT Commissioner Steve Novick hasn’t made the public promise that all paving projects will be safety projects like I suggested last month, it looks like the most important audience for that message — PBOT planning and maintenance staff — are already doing it.

UPDATE: And it looks like even the Oregon Department of Transportation is getting into this act. Last summer they added buffered bike lanes as part of a major repaving project on McLoughlin Blvd (99E) in the Gladstone area (see photo below). And this isn’t the only project they are looking to improve bicycling on, “We’ll have buffered bike lanes on the N Denver Ave (99W) bridges over the Columbia Slough when that repaving is done this fall, and are looking into potential for similar improvements in combination with several other upcoming paving projects,” says Region 1 Transit and Active Transportation Liaison Jessica Horning. 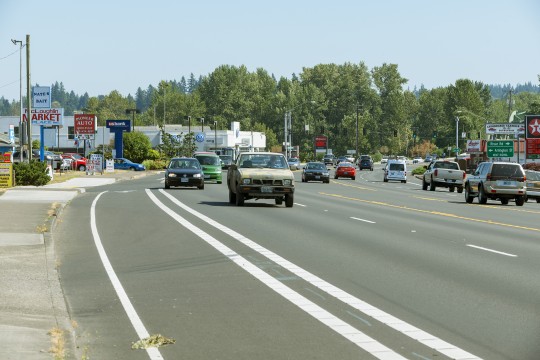 What happened with NE Sandy? It was completely repaved from NE 47th to NE 82nd in 2012, which would have been the perfect time to add bike lanes.

I feel (and share) your pain maccoinnich. I remember when that project was going on. I stood there, dreaming about what could be. Alas, it didn’t happen. I know (in my heart) that Sandy is destined for protected bike lanes. It will happen. How soon depends on how hard we push for it.

Don’t they have to add bike infrastructure in those cases? I thought it was required by law…

If you are thinking of the Bicycle Bill law, that only applies to state highways and it only applies when a road is built brand new or completely rebuilt. In this case we’re talking about a city-owned and managed road.

CORRECTION! – I was wrong in my statement above. The state “bicycle bill” (ORS 366.514) applies to all roads, not just highways and it applies to roads owned/managed by any jurisdiction (not just ODOT). Sorry for the confusion.

Wouldn’t that include city streets?

City streets can be included in that law (Foster is and will be an example when built).

I think it has to involve a road reconfiguration though (like a lane reduction on Foster, etc.). Not just a repaving.

This is definitely a net positive that I would have overlooked, however…

I can’t help but wonder if (as it’s been stated before) all of the “low hanging fruit” has been picked in regards to building out the bike network, then continuing that analogy, this is the equivalent of scavenging on the ground versus reaching up higher?

I wonder, too. On the other hand, every opportunity, no matter how scavenged, that PBOT seizes to give bikes a little more room on the streets is an improvement.

It seems to me that after the recent decline or hard times or bikelash or whatever we want to call it, we’re re-starting from a few steps back. Freshly painted buffered bike lanes on main streets do refresh the signal to drivers that yes, bikes are still a thing, bike infrastructure is normal, this is still Portland.

We can (I hope) move forward again from there.

A well-maintained infrastructure is a safe infrastructure. Semantics is a hell of a drug, and our species been off the wagon too long. Here’s to hoping.

That 8-inch stripe of paint is soooo “safe.” I’m glad that it has magical properties, otherwise it would be used to drive over and park on.

Oh wait, you can see someone driving right over the line in the first pic.

And on 15th, why does it take so long to mark the crosswalks / bike lanes? If this was a road project, it would be opened for cars as soon as the pavement dried. More double standards for people not in a car.

More paint is not a very good improvement.

While it’s obvious that road striping provides no physical barrier against automotive incursion, paint can indeed increase safety. For instance, read up on the difference between 10- and 12-foot traffic lanes:

Again, I’m not arguing that paint is as safe as a jersey block or a physically separated path, but paint can indeed provide real help.

And how about the wonderful paving on 43 through West Linn / Lake Oswego.

The paving stops about an inch into the bike lane, forcing you to choose between a dirty, old, rutted bike lane or the smooth blacktop (in the lane).

And the transition between the two is now or three paving jobs old–it’s close to being dangerous.

Is Hwy 43 maintained by ODOT? Sounds like what they did to Hwy 101.

Poor pavement condition presents a far greater safety hazard to a bicycle than it does to a car. Ever hear of a car crashing due to a crack in the pavement. Just don’t let them pave the “car” travel lanes and skip the Bike lanes like they do in so many places.

Well said. Debris is an issue for me too. Besides feeling like a fly crossing traffic, moving alongside cars and trucks, we shouldn’t feel like we’re running along a tight-rope either. Is it even safe to run over a sewer grate? I’m afraid to try.

I have had TriMet clean the bike lane on the road up to the Sunset Transit Center twice in the last month or so, and it’s still terrible. I suspect their contractor has absolutely no idea how to actually clean the side of the road.

Depends on the grate and your tires. The city has been replacing them with perpendicular slotted designs. Those are still slippery when wet and usually about 1.5in down from the pavement level.

Current mayors have done the same.

A before and after study by Monsere, McNeil, and Dill in Portland suggested that buffered bike lanes are more than just paint:

Comparing bad designs to other bad designs produces bad results. I’ve been nearly right hooked on all 3 bike lanes… and I’ve only ridden on them about twice each!

That’s nice. The rich get richer, and SW still doesn’t have a single safe route from downtown.

tell them to build the Red Electric Trail

Out in Washington County, less encouraging is how bike lanes immediately adjacent to main lanes, sometimes are among the amenity additions that go along with two lane country roads that get converted to monster-thoroughfares…with little in the way of improvement to alternative routes for biking.

Bike lanes adjoining big thoroughfares help some to improve riding conditions on such roads; but because of the harshness of the conditions, and danger of thoroughfares heavily used with motor vehicles, types of people riding on them, beyond those that already are riding those road, will likely be limited.

So city campaigns to address the need to repave to keep up with maintenance needs don’t necessarily mean support for biking gets thrown to the wayside, but the little additions to bike infrastructure that coincidentally go along with repaving, are a kind of slow way to build the kind of bike infrastructure that can be widely inclusive of people having less highly tuned riding styles.

Last year they failed to improve NE Halset east of 67th. I hear that there is a section of East Burnside that will get repaved…..but where we know not. I sincerly hope that if anything east of 47th gets grouNd down and repaved, new updated striping is included. We want it, pleasee. Fix the bike lane gap, give us safe non-door zone bike lanes.

I will add that even mundane pot-hole fixing is a huge safety task. I was recently biking in Vancouver, BC when I hit a front-wheel shaped flaw (dip?) in the pavement that sent me over my handlebars, breaking both my arms.

Why does that 99 E project have rumble strips yet BH Highway doesnt? Yes, PBOT maintains their part of BH Highway, but still..