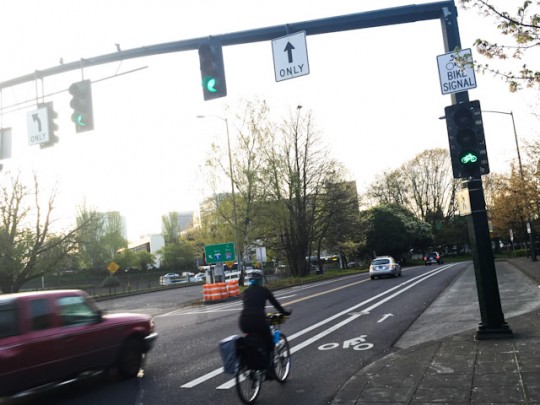 One of Portland’s busiest bike crossings will flow a little more efficiently thanks to a new bike signal activated last Thursday.

The signal gives a green light to people biking southbound on Wheeler Avenue, preparing to curve around the Moda Center into the Rose Quarter Transit Center area. Northbound bus and bike traffic here has a green signal phase of its own, but that doesn’t conflict with southbound bike traffic.

Now that the bike-specific traffic signal is installed, people can bike both north and south during that signal phase. Here’s the description from Peter Koonce, signals division manager at the Portland Bureau of Transportation:

I had wanted to do it this from my first day at the City, but there’s a lot of things like that. So, the story goes that [local traffic analyst] Kirk Paulsen reminded me of this. When a citizen asks for something, the City (with appropriate policies and resources: money, time, and expertise) has an ability to respond. In this case, I had an intern draw up the plans and get it to the hands of the electricians who do the construction work.

The signal is a simple addition that will reduce delay. The added green time for the southbound bike lane allows people on bikes to go through when the northbound bus/bike only movement is green. Previously, we treated each direction (north, south, eastbound) as separate movements because of the heavy left turn conflict of cars trying to get on the freeway. The southbound bicycle lane does not conflict with the northbound bus/bike movement.

Koonce said the project cost about $5,000. The new signal phase adds about 12 to 15 seconds of southbound green time, depending on the time of day and amount of northbound traffic detected.

Koonce said the project actually includes at least two violations of the national standards for bike-specific signals, which are widely used in Europe but still considered “experimental” in the United States. The new signal violates two rules, he says:

– First, the bike signal is positioned too close to the main traffic signal, leading to a risk that people in cars will see the bike signal and think it’s for them. Koonce said Portland addressed this by inserting metal bars in the signal head that make the signal invisible to people in the rightmost mixed-traffic lane.

– Second, the bike signal isn’t allowed to be green in any situation where there’s a potential conflict from any direction, such as eastbound cars turning right from Winning onto Wheeler. Koonce said this didn’t seem to be a major risk in this situation.

“I don’t think a lot of people leaving the Moda Center are circulating around the Moda Center,” Koonce said. Still, he said the issue might be worth more investigation.

Koonce, who sits on the national board that oversees traffic signal regulations (where he’s generally been an outvoted voice for change) said the national signal standards had been written “to be as conservative as possible” to prevent “overuse of bike signals.”

He said Portland had installed the bike signal anyway.

He said Portland had installed the bike signal anyway.

Can we clone this guy and put him in City Halls across America?

Good on him. This country could use more people who possess a “fsck the MUTCD” attitude.

Elect him for Fritz’s seat and lets get some mountain biking!

Now that is some Platinum level thinking. And action.

This is fantastic. Thanks Peter + PBOT!

Peter and Seattle’s Dongho Chang are rock stars. Thanks Peter!

The fact that they’re allowed to follow their judgment (over national standards that provide some protection from lawsuits) means some credit is due to higher-ups like Leah Treat and Steve Novick.

The southbound Weidler/Vancouver light is the one that always annoys me. An extra ten seconds of green would be awesome.

Likewise. I understand ODOT has a lot of say in that due to the highway ramps, unfortunately.

The Rose Garden…and it’s not platinum either.

now can they modify Larrabee at Broadway signal so it is timed better for everyone? It is frustrating and almost comical the degree to which this signal favors North/South traffic over Broadway.

This is an example of recognizing the need to improve bicycle throughput as well as safety.

Sure, safety is important, but if you design everything for the safest operation possible for bicyclists, you decrease throughput, and add unnecessary delays to bicycle commuters.

It’s a well tested fact that travel time is an important parameter with regard to how commuters choose their travel mode. If a bicycle route is peppered with delays, then a certain percentage of potential bicycle commuters will choose to travel by transit or car instead.

Southbound Vancouver/Wheeler Aves are one of the busiest bicycle routes in the entire Portland commuter network. By adding 15 seconds of green time (to a signal with a 90 second period) will eliminate a delay for about 1/6 of the bicyclists on the route. If the average delay was, say, 48 seconds, then that’s an average time savings of 8 seconds per bicyclist on the route. & if there are 3000 bicyclists/day on the route (in good weather), that’s a savings of 24,000 seconds/day, or 400 minutes/day, or 6.7 hours/day of delay.

So, thanks to this signal, there is a reduction of about 6.7 hours per day of bicycle riders being stuck at a red light at this location.

& not only is this time saved for bicyclists, it’s also annoyance eliminated. Being stuck at a freeway entrance next to 2 lanes of growling cars, trucks and buses is usually not the best part of a the day for a commuter on a bicycle. So not only is it 6.7 hours/day of time saved, but it’s 6.7 hours of *unpleasant time* eliminated.

Lately it seems that most of what PBOT is focusing on is improving safety and comfort for timid bicycle riders. While this is laudable, it’s refreshing to see PBOT staff taking measures to make the commute quicker and more pleasant as well.

Correction — the average delay eliminated is only 24 seconds, not 48 seconds. So the total time saved is 3.3 hours/day, not 6.7 hours/day.

Still, an outsized benefit for commuters on bikes at a very modest $ cost to the city, and no negative effects on motorized traffic.

That time is of higher value, because less time stuck in the worst air quality locations on the route. And much better physical exercise with regular cadence and breathing, instead of sporadic, intermittent exercise.