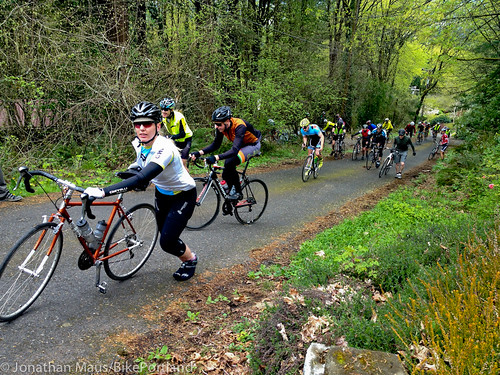 In Portland we call this fun.
(Photos J. Maus/BikePortland)

Rumor has it that Portland’s toughest weekend of cycling is coming up. “De Ronde” and its sister event “La Doyenne” are two unsanctioned road rides that have captured the imagination of thousands of riders (and the media) over the years because of the sheer difficulty of even finishing.

Our secret sources say the Big Weekend for both rides is April 18-19th.

We hope you’ve been training a bit because if you choose to do both you’ll need to climb nearly 15,000 feet over the course of about 100 miles.

Don’t take my word for it, check the elevation charts (yikes)…

We’ve covered De Ronde a lot in the past because it happens right here in the West Hills above downtown Portland. This year we wanted to share a bit more about La Doyenne from the guy who started it, 42-year old Andrew Springer. 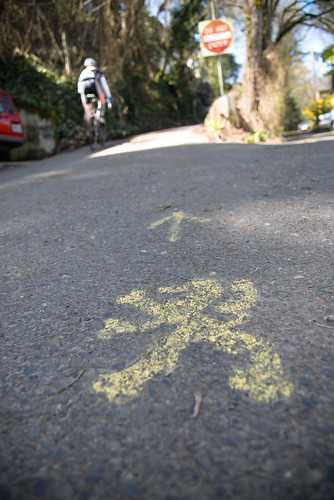 Springer moved to Happy Valley (an unincorporated community southeast of Portland) from Bend in 2008. As soon as he got here, “Friends kept bringing me to the West Hills,” he shared, “to chase the Lions of De Ronde.” Springer is referring to the Lion of Flanders stencil that marks the De Ronde course (the event is inspired by the famous Flemish race Ronde Van Vlaanderen).

While Springer loved the steep West Hills climbs, he thought his local climbs were pretty darn nice too; but he was tired of riding them by himself. “Living in Happy Valley at the time, I was surprised that I rarely saw cyclists on and around Mt Scott, despite the fantastic climbs and close proximity to Portland.”

So Springer modeled La Doyenne as a tribute to De Ronde; “Imitation being the sincerest form of flattery,” he says.

The ride’s popularity has exceeded his wildest expectations. Many of the nearly 1,000 riders at Saturday’s De Ronde do the double and ride La Doyenne the following day.

And then there’s the story about how Springer met the woman of his dreams. After the 2013 La Doyenne, Springer checked the climbing segments on Strava to see how the leaderboards were shaken up. Then something caught his eye: “I kept noticing a particular girl took a lot of QOMs [Queen of the Mountains].” Springer made contact, they went on a bike date, and the rest is history. “We went for a ride together the next week. This past May we were married on top of Mary’s Peak on an 86 mile ride with 7,000 feet of climbing.”

If you plan to do the rides and want to prepare (mentally or physically), check out the routes of De Ronde and La Doyenne via Ride With GPS. On second thought, if you haven’t done the rides yet, you might not want to know what you’re getting into.

If you’ve already done La Doyenne, Springer wants everyone to know that he’s made some important changes to the route this year. The start/finish has been moved to the west side of the Springwater Corridor, making it easier to get to from Portland. He’s also added a few new climbs and improved the flow of the route. He even tells me you can expect some food about half-way through course.

Learn more about this Big Weekend of Fun and Pain at RondePDX.com.

Are the lions painted yet?

I had heard the La Doyenne route was changing, but only that they made it HARDER, not that the round trip is shorter now. I don’t know if it was just the extra transit miles or that I have more experience with the other one, but the tamer looking profile belies what seems like an even harder ride.

I spoke with the creators of RideWithGPS. The punchy nature of the La Doyenne climbs cause the elevation to be underrepresented online. I expect most GPS to show ~8000 ft of climbing after riding La Doyenne.

Got back a few hours ago and my GPS read 9767 feet, FWIW, but that’s with a few wrong turns in there.

Yes. The new course is definitely tougher. They took out a good chunk of the flat sections at the beginning).

And with the moved start/finish, some of the toughest climbs (like Johnson Creek to the top of Mt. Scott) are further into the ride.

Some Guy
Reply to  Champs

T B
I got 7,963ft of climbing on your route. Very challenging! Hard to keep the front down in some spots. Thanks for creating it and putting down all the markers.
Recommended 1

I did the ride Saturday. It was my third time and I like the changes. A few notes:
The old right turn marker from SE112 onto Flavel at mile 3 is still visible. The route goes straight now.
I missed the turn off Clatsop onto Barbara during the descent. The U turn marker at the bottom got me back on track but I won’t miss that again. ( I thought the old version worked well here …? )
The curb hop in the middle of the 12% climb at the bitter end is evil.

Some Guy
Reply to  Brett

Thank you SO MUCH for the feedback Brett! I will be completing the 2015 painting soon. I wait until the day before the ride to mark some of it so the arrows are fresh and clear for the event. I have plans to get a large Clear Straight arrow onto 112th, though I did blackout the 2014 right turn arrows onto Flavel?

The Left Turn onto Barbara Welch surprises me as I put about 5-7 arrows onto Clatsop as well as an early note in the GPS Cue sheet. Its really helpful to learn that I need to make them clearer. Thank you! (Had to eliminate the 162nd->Henderson section of previous years to keep the total mileage ~50)

Glad you liked the addition of
Just like Haven

I hadn’t known to look for turn markers on the Clatsop descent.Before heading out, I compared the old and new maps and missed that the route had changed there. I didn’t bring the whole cue sheet and missed the warning in there. I’m glad I did the preview/training run through. I’ll be ready for the 19th.

Interesting to note that that’s the exact date and time of the Alley Sweeper motorcycle ‘ride’. Lots of frustrated cagers that day!

Sure is, never needed your approval.

photo seems to show the route and the rider salmoning the wrong way on a one-way street past a ‘Do Not Enter’ sign, wtf?

Neighbors here are forgiving if you are polite.

That would be college st. Second hardest climb that comes near end. Virtually no traffic. I’ve climbed it nearly every day since Jan. 1st

Kudos to la Doyenne organizers. So glad they took my suggestion and moved the start/finish to the closest Portland point of the route.

Also went up the Scouter’s mountain climb last night. Besides getting chased by a dog, that is going to be a great addition!

These events are some of the best in Portland. Thanks for making these happen!

Some Guy
Reply to  davemess

Thanks for the feedback on the Start/Finish Location.

Glad you checked out the Scouter’s Mountain Climb. It is not only a new part of the route at the halfway point, there will be food and drink at the top of the climb (~Mile 22), not to mention a stellar view of Mt Hood on clear days.

Does the Ronde start at Montgomery Park?

This one is tougher:
https://deathride.com/course/

longer for sure but not nearly as steep. This one is long and steep:
http://www.garrettcountygranfondo.org/diabolical_double.htm

Death Ride is tougher due to the altitude factor – all five of its passes exceed 8,000′ and the ride itself averages around 6,500′ elevation. None of the Garrett passes are much higher than 3,000′.

Interesting that you think Death Ride is harder. The folks I know who’ve done both think the Garrett Fondo is a notch tougher. Anyways, I made no claims, other than it’s long with many steep climbs. Kinda like doing the Ronde and Doyenne back to back, plus a little.

You are a ***insult deleted by moderator***. This is more of a gathering of local beasts than a sanctioned competition. The ride is the toughest UNDER 50 MILE RIDE IN OREGON, not the USA. There are Many harder rides out there esp. when getting into century’s.

Also, try looking at mountain biking if you want to go do hard things. The Cream Puff certainly isn’t the easiest thing I am have done (100 miles and over 20k of elevation gain).

Above was in response to trek 3900

This one will test your lung capacity – start in Ouray, Colorado and ride up to Engineer Pass – elevation gain about 5,000′ in about 14 miles. Have fun:
https://www.youtube.com/watch?v=6FMWMdxWMiM

Here’s another for comparison. And, I really like how it’s called a “hill climb”.

I raced this several times and I remember only one little flat spot on the ascent.

And, thank you all for organizing/designing these two grand climbing tests in the Portland area!!

Kaloko Rd on the Big Island is pretty crazy too. 11.7 miles, 5000 ft of climbing, with multiple sections over 20%. Made it to the top last summer, but was unable to stay on the bike the whole way.

I vote for Kaloko Rd being top notch for tough factor. The humidity saps far more than the elevation of the Death Ride.

I am seeing new lions in my Jackson Hills neighborhood. I will be ringing cow bells for the riders.

Neighbors like you really make this ride enjoyable, I am grateful; Last year just after I ran out of water on east side, a guy was handing out bottles in his driveway with words of encouragement for any takers.

Yes. The new course is definitely tougher. They took out a good chunk of the flat sections at the beginning).

Some Guy
Reply to  danny noren

Not only was the flat section at the start removed, more climbs were added! Hope you enjoy the new La Doyenne Route!

Rob
Reply to  Some Guy

Hopefully, you kept the part where you descend into the cul-de-sac only to have to turn around and climb back out. That cracks me up every year.

Some Guy
Reply to  Rob

Glad you like that piece of sadism. It’s definitely still a part of La Doyenne, it just arrives earlier in the route than in the past-https://app.strava.com/segments/9152876

I got 7,963ft of climbing on your route. Very challenging! Hard to keep the front down in some spots. Thanks for creating it and putting down all the markers.

This was meant in response to Some Guy…

Middle of the Road guy
Reply to  T B

I know Some Guy…he’s Some Guy!

How to improve your climbing speed: