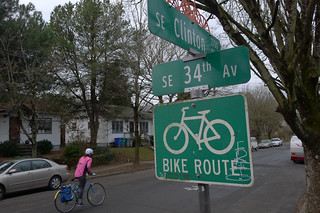 Whether you see it as a battleground or a workable compromise or a national model, the Clinton Street bikeway is one thing for sure: beloved.

A group of Clinton Street fans are meeting at SE 30th and Division Saturday to plan a party this summer that will celebrate this iconic bike route and everything it’s brought to the mix of residential and commercial uses that have made Portland’s Hosford-Abernethy and Richmond neighborhoods what they are.

The event is being promoted by resident Kari Schlosshauer, a neighborhood and transportation advocate who also works as regional policy manager for the Safe Routes to School National Partnership. (Readers might remember her popular guest post here last year: “A six-point plan to make Portland a better place to grow up.”)

Though we have to note that Clinton wasn’t quite the city’s first official bikeway — according to this map, at least, that’d be Salmon/Taylor about one mile north — and that the city is inconsistent about whether Clinton counts as a “neighborhood greenway” — Clinton is certainly one of the most historically important bikeways in the country.

The planning meeting (listed here on Facebook) is 2 to 4 p.m. this Saturday, March 21, at the Bollywood Theater cafe, 3010 SE Division St.

“We want your participation to make the party one that everyone can get involved with,” Schlosshauer writes. “Join the party planning fun!”

Not sure how PDOT or anyone else can claim that it isn’t a greenway?

It is legally marked as one and follows all the rules of one. As such until the markings disappear, no one can really say it isn’t-even PDOT.

Not to mention it still appears on all the PDOT bike maps as well (though honestly mine is a year old- don’t know if they took it off this last year or not).

Anyone saying otherwise just doesn’t want to make any of the hard decisions that need to be made to keep it as one with this new wave of growth in the area, and something needs to be done…It’s just going to get worse (NW 50th and Division is getting a pretty big mixed use here real soon). I also suspect Clinton will see a huge uptick when Foster gets underway too, since it the most direct link to the Tillicum Bridge.

Not that it’s not a greenway, that it has not yet been constructed to current greenway standards. Portland’s bike routes, like most new things, have been implemented over time. What was standard 30 years ago is sub-standard today. PBOT has not done a good job of keeping all bikeways up to current standards. PBOT has done piecemeal ‘upgrades’ from time to time, but nothing holistic.

I think it’s important to remember what this corridor was going to be…The Mount Hood Freeway!

Clinton St. certainly isn’t perfect from a cycling perspective, but the alternative would have been devastating to this neighborhood.

Yep…there was no way they were going to destroy this neighborhood the way they did the African-American neighborhoods.

These individuals who stopped the freeeway in their younger years later protested the no parking apartments as middle-aged folks and were labelled as “NIMBYS” by New Urbanists. Just sayin”.

They were right to stop the freeway. I don’t agree with their desire to stop higher density development. Not everyone is right about everything.

SE 26th near the Clinton intersection (the section which connects Hosford Middle School and Cleveland High School) is not a safe bike route to school but needs to be (currently 3′ bike lanes; disappearing bike lanes).

paikiala
Reply to  Bald One

Clinton 12/26/Chavez was retrofitted with speed bumps/tables back when the goal was 25 mph. Retrofit should shorten the distance between bumps. Diverters at 17th and current circle locations to prevent east-west movement by people driving would be good starts for reducing auto traffic.

PBOT does not yet create safe routes to school for high schools yet – it only began education programs at middle schools this FY.

Agreed! The *entire* stretch of Clinton is in need of upgrade — from SE 12th, including the new path to the soon-to-be-opened Tilikum Crossing, all the way up to SE 82nd where it lands.

A pre-school at 18th & Clinton recently had someone clip off a car-door mirror (and nearly a 5-year-old) with their car. The excuse? “I’m not from here, and I didn’t know there was a school there.” Diverter at 17th would be very helpful there.

those speed bumps uphill are the devil.