Jerome Kersey, the local basketball hero who died last week at age 52, has been granted one of Portland’s highest honors: 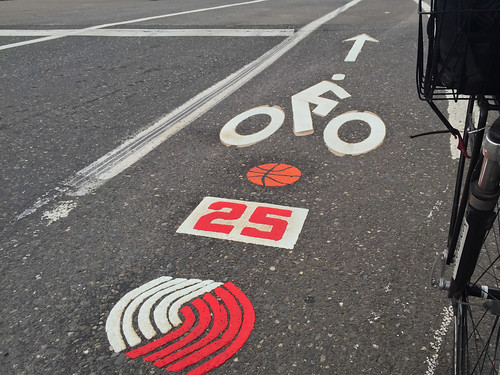 Kersey played with the Blazers for 11 years following his 1984 draft, forming part of the team’s core in its strong years of the late 1980s and early 1990s. He played more games for the franchise than anyone except his teammate Clyde Drexler.

Kersey’s death last week at his home in Tualatin, of a pulmonary embolism, shocked family, friends and fans alike. As far as we know, it’s only the second time one of Portland’s famous bike lane decorations has been dedicated to a particular person.

The City of Portland Bureau of Transportation is responsible for this artistic bike lane addition. Maintenance crews perform the work on their own time using leftover materials that would otherwise be thrown away.

As longtime Blazers fans here at BikePortland, we’re happy to see PBOT commemorate a Portland character worth remembering. We also look forward to rolling down this bike lane at Blazers Bike Night coming up April 8th!

To get your own photo of the Jerome Kersey Bike Lane (if taking selfies, use caution since this is an active travel lane), roll over to NE Multnomah Blvd, just west of Wheeler Ave in front of the steps at the south end of the Moda Center.

Hat tip to Aaron Brown for the above lede.

I know it’s not a bike lane, but I thought about that heart next to the bike plate on Lincoln right outside Mia Birk’s old home as being the first PBOT flourish to a bike facility dedicated to someone.

What about the Mariota bike lane character? http://bikeportland.org/2014/12/29/pbots-whimsical-bike-lane-characters-make-comeback-126243

Jeez, of course. I forgot that was Mariota-specific rather than Duck-specific.

Naaaa. Mariota lost the most important game of the year.

What about the caped superhero bike lane superhero character? The glasses and the letter T on the cape must be in honor of Leah Treat.

This is a great – and very Portland – way of honoring someone. Good job, PBOT!

By the way, where is this bike lane decoration located? I’m assuming somewhere near the Rose Quarter?

It’s unfortunately at a location that doesn’t see much bike traffic at all… And in fact gets quite a bit of illegal encroachment from people driving cars. The location is NE Multnomah Blvd, just west of Wheeler Ave in front of the steps at the south end of the Moda Center.

I wonder what the Jonathan Maus and Michael Anderson bike lanes are going to look like?

Maybe a blazer jacket for Michael and a camera for Jonathan? Although the camera might confuse people

I love these lane decorations, and hope they end up everywhere. How about a bunch more Blazer icons within say 1 mile of the arena, with arrows pointing the way to the game. Double win: city spirit and encouraging bike travel. I’m sure others have cool ideas as well.

And Timbers logos near Providence Park!

>>one of Portland’s highest honors.

?? wow, way to go all out for him. it will be faded/defaced in short order.
Does he have any connection to cycling ? I don’t really care for LeBron, but at least he really does cycle.

Will the Novick/Hales combo get a high honor lane marker too ? (for their heroic street tax/fee crusade )

I met him twice. nice guy , but many forget that he was a professional athlete who goes where the pay is best , or as Barkley says “a millionaire in shorts”

Just a bit of a correction – Jerome lived in Lake Oswego – But what a cool thing to do R.I.P JK 25

I’m glad to see that the Blazers’ logo they used is the straight-up one that was used in Kersey’s day. Never appreciated the ‘modernization.’