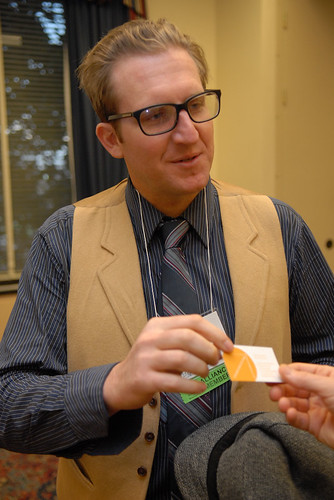 Paul Steely White, executive director of New York City’s Transportation Alternatives, is known in the biking advocacy world as a charmer who has been right in the middle of his city’s 15-year turnaround to become of the country’s leading cities for transportation innovation.

Melissa Wells is an up-and-coming transportation advocate for PolicyLink, a broad-based research institute that studies economic and social equity.

Next month, the pair will be in Portland keynoting the Oregon Active Transportation Summit. Organized by the Bicycle Transportation Alliance, the summit is the largest gathering of biking, walking, and transit advocates in the state.

Also on the three-day agenda: mobile workshops of Portland infrastructure and advocacy, a raft of breakout sessions with Oregon’s wealth of biking and walking pros and a pair of networking receptions, including an after-hours round of Pecha Kucha slideshows that I’ve been looking forward to for the last year.


Among other presentations, Portland Bicycle Coordinator Roger Geller, PBOT Safety Specialist Greg Raisman and Karen Vitkay of Alta Planning and Design will share the first results from their project examining usage data for neighborhood greenways and Jenna Stanke of Jackson County (home to Medford and Ashland) will lead a panel on “fixing big suburban roads.”

The annual conference is a production of the Bicycle Transportation Alliance.

Here’s my favorite bit of advice from Steely White, from a since-deleted interview with bike maker Rapha that we linked to in the Monday Roundup in 2013.

A hard lesson for anyone to learn, especially for self-possessed leaders of progressive change, is that there is always a better messenger than you. What I mean by that is that however articulate or convincing you may be as a bike advocate, it’s so much more effective to mobilize a doctor, a real estate exec, a tech mogul, a union, or a small business association. At my best, at our best, we are cultivating and activating strategic partners who share our passion for liveable streets, protected bike lanes, and the whole toolbox of measures that make our streets, neighborhoods and cities greener and happier. That’s how you move politicians. As bike advocates, we are a one note band, and they know our song. With myriad and diverse allies you can create the symphony that makes politicians get off their duff and dance.

That may be true, but biking believers can’t build those myriad ally networks without sometimes having a couple days to talk to each other.

the two get equal billing in the promotional materials and have apparently equivalent roles in the agenda. why is white alone featured in the headline.

Good point, Are. As the head of the country’s biggest local transpo nonprofit, I think White is clearly a better-known name (hence his photo) but Wells belongs in the headline. Obviously we’re looking forward to the wisdom of both.

The hair, the shirt-vest-tie ensemble. He had me at hello. We need to arrange an accidental meet-cute for him and bike snob nyc