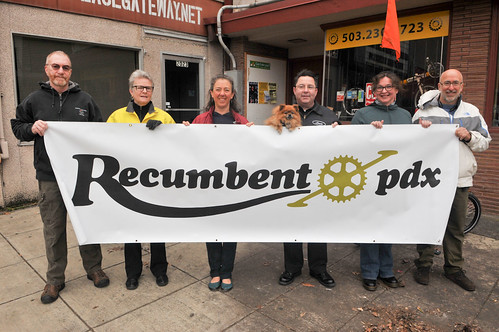 The lights at 2025 SE Hawthorne will be turned back on tomorrow when a new bike shop, Recumbent PDX, opens its doors for the first time.

Back in November the unexpected death of Marilyn Hayward darkened spirits across the community. Hayward was the owner of Coventry Cycles, a beloved shop that had operated at this same location for over three decades. The shop has remained closed since her passing — but now it’s time for a new beginning. 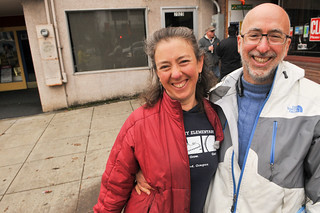 Standing outside the shop this morning were Morgan, her husband and business partner Mel Birgé, and five employees who are eager and excited to get to work. Four of them are Coventry alumni and one of them, General Manager Martina Fahrner, is a former co-owner of Clever Cycles.

Fahrner, who has become something of a bike shop consultant met Birgé and Morgan in April of last year, about a month after she parted ways with Clever Cycles. Since then they’ve plotting how best to realize their dream of owning a bike shop.

Birgé and Morgan moved to Portland from Chicago four years ago. It was a total quality-of-life decision. “I wanted to die someplace fun,” Birgé said with a smile this morning, “So Portland was a natural fit.”

The couple can almost see their house on SE Elliott Street from the front stoop of the shop. They’re no strangers to owning a small business (they ran a company that provided customer service for commercial phone systems), but this is their first foray into the bike industry. Birgé is the more enthusiastic biker of the two. He owns several bikes while Morgan still prefers her vintage, 1982 pink Terry road bike. “People make fun of it, but I love it,” she said. “It’s a classic, but so am I!” Birgé started riding a recumbent two years ago when back pain made his jaunts up the hills of Washington Park too painful to pedal through. “It was my sciatica,” he shared today, “but I started riding a recumbent and all my pain went away.”

“It’s a new era for recumbents. They’re going to be the next cargo bikes.”
— Martina Fahrner

And Morgan’s far from alone. As more and more baby-boomers take to cycling, keeping them comfortable with different bike options represents a golden business opportunity. “I really think it’s a great time for recumbents,” Fahrner says, “Or I wouldn’t have talked Mel into getting into it!” Fahrner’s read on the bike market deserves respect — she helped establish Clever Cycles as the first major specialty shop for cargo bikes in America.

Birgé, Morgan and Fahrner have been meeting since August to draw up a business plan and get their visions firmed up. When Hayward’s passing put the future of Coventry in question, they shifted their timeline up and decided to open up in the same location. “There’s a lot of tradition here,” Morgan said, “While we have our own plans and see this as a new beginning, we also want to honor and continue what Marilyn stood for.”

Plans for the store include having the largest selection of recumbent bicycles on the West Coast. As part of the lease agreement, Morgan and Birgé purchased all the existing Coventry Cycles inventory. They also plan to beef up the bike selection and hope to have 90 fully-assembled trikes, recumbents, and niche cargo bikes on the showroom floor (50 of which are set to be delivered in the next 6 weeks). The idea is to have bikes ready to go so customers can come in, find the one they like, and take it home the same day.

Recumbent PDX will be the exclusive dealer for many of the top brands on the market including Greenspeed, Hase, HP/Velotechnik, Catrike, Bacchetta, and others.

In addition to serving the existing recumbent market, the shop will have a special focus on customers with special needs and adaptive cycling products. Employee Eddee Edson is the woman behind Thrive Cycling and has special expertise on fitting older riders onto bikes that are comfortable, safe, and accessible. Fahrner said they even plan to make house visits to older customers who aren’t able to visit the shop.

There are plans for an opening party late next month, but for now the crew is focused on building new bikes, cleaning up the shop, turning the lights back on, and getting ready for customers. A lot of them, if Fahrner’s instincts are right.

“It’s a new era for recumbents,” she said, “They’re going to be the next cargo bikes.”

A focus on special needs? Martina, Janet, and Mel? My worlds are colliding! How awesome!

Congratulations, Coventry Cycle Works was a special place, Glad to have you there and look forward to Portland’s newest recumbent shop.

Good news / bad news kinda thing. Good news is obvious, bad news is that I thought it was spelled “recumbant”

Sorry Eric, it’s always been spelled “recumbent”. (But I’ll give you a pass seeing that you spell your 1st name incorrectly.)

I’m happy to see Marilyn’s work will be carried on and the recumbent cycling community will have a good shop in town.

I would also like to point out that a number of Coventry Cycle Works employees have joined forces with Rose City Recumbent Cycles in SE Portland.

The next cargo bikes? A recumbent will never be as useful as a cargo bike

Hey Matt, there are several recumbent cargo bike designs on the market.
Move lots of stuff and be comfortable at the same time!

Humans can haul stuff in many different positions. http://hpm.catoregon.org/?page_id=73

And Eddie’s going to be there, wonderful news. Can’t wait to drop by and say hi.

Will they be selling beard maintenance equipment?

I don’t see why not. Male facial hair grooming products would be entirely appropriate. Sometimes a stereotype exists because it is true.

I’d recommend the Oster Classic 76 -with a range from 3 1/2 inches down to “near Gillette”, it’s a real winner.

But, sadly, despite years of trying, I lack a “Portland-quality” beard. Since the store will confine itself to things we do well, no beard maintenance equipment for sale.

We’ll be up after a short renovation. Look for our website in a few days. In the meantime, Martina Fahrner has our Facebook page up.

Come see us in a few weeks and take a trike for a spin!

I think a better name would have been Recumbentry. Great to see someone step up and keep it going.

This is awesome. Conventry was a great (and unique) shop. Glad to see this much needed recumbent shop reborn.

It’s hard to imagine 90 assembled ready to ride bikes/trikes on the existing showroom floor. Thrilled to see the location back in business to serve current and future “bent” riders.

This business couldn’t have been taken on by two nicer people. YAY Janet and Mel!

Good new name and logo for the store, good location with what’s always been a nice, unique store entry, and great that they’re helping introduce people to recumbent riding

I enjoy riding two wheeled upright bikes, a lot, and still do ride them. Plenty of people out there though, that rebel against the very idea of sitting upright and pedaling on a bicycle, or having their back ‘hunched’ over to reach the bars of a bike.

Which, if they don’t ride, may be a big reason they don’t ride. With the good work of these new store owners, the laid back race car seating style of a recumbent may be in their future.

A good “transitional” bike for them to sell might be foot-forward bikes–not everyone who can’t be comfortable on a standard bike wants to be a cockroach in a herd of cattle, either.

It occurred to me that it seems in poor taste to include the quote, “I wanted to die someplace fun…”, considering the circumstances that brought these people to their current state…

I am rather amazed at the continual references to Marilyn, and the lack of references to Sherman Coventry, from whom Marilyn bought the business. Sherman sold me my Rans Stratus, which now has between 10K and 12K miles on it. I also got a Rivendel Rambouilett from Coventry Cycleworks when Sherman was the owner. Here is a bit of information about Sherman from the City of Portland’s public Record:

“Sherman Coventry, Bicycle Advisory Committee Vice-Chair, said he owned a bicycle shop in Southeast and had been on the Committee for nine years. The Bikeways Project has come to the Committee in various stages for recommendations and priorities and when he saw the whole package he was struck by its moderation and reasonableness. In outer Southeast, there is no impact on parking and it has incurred little cost. Mr. Coventry said, in fact, the overall project has a very low cost and impact. Encouraging bicycle use is a longterm goal and will help mitigate parking problems and traffic congestion.”
efiles.portlandoregon.gov/Record/3662610/File/Document

Sherman was highly involved in developing bicycling in Portland, and for that we all can be thankful.